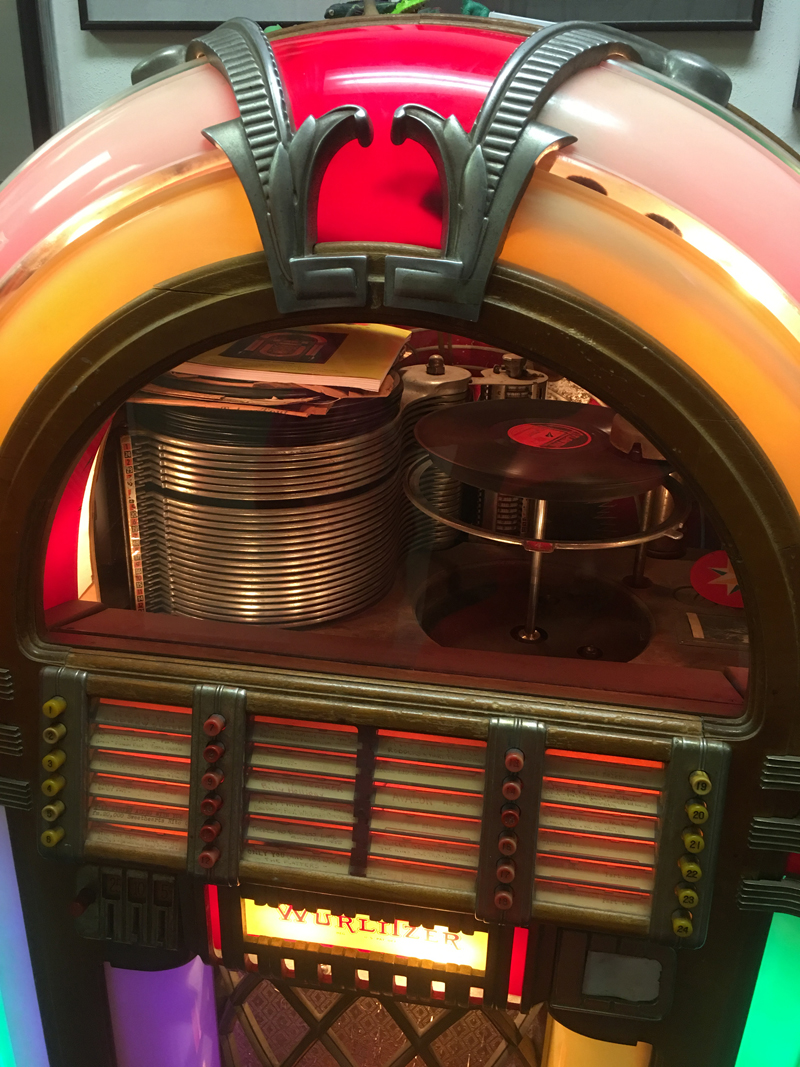 This vintage record-playing jukebox in the lobby of The Harbor Theatre in Boothbay Harbor captures the retro spirit of the inviting movie theater. (Christine LaPado-Breglia photo)

Good to have friends: Fans of The Harbor Theatre, the cool little one-screen movie theater in Boothbay Harbor, will doubtless be pleased to know that, contrary to what had previously been announced, the theater will not be closing down later this year. As the theater’s website notes, the Friends of The Harbor Theatre, a 501(c)(3) nonprofit organization, will be stepping in to purchase and operate the theater effective Oct. 1, after the current lease runs out.

I had a chance to speak by phone recently with Hamilton Meserve, who is vice president of the Friends of The Harbor Theatre, about this latest development.

“Our mission is to promote broad-screen cinema on the peninsula,” Meserve said. “We’re going to broaden the offerings as much as we can.” Future fare will include “some indie films, first-run films, documentaries, local films.”

“Revivals” – bringing back popular older films – are likely to play a big part in The Harbor Theatre’s new format. “We might sell tickets at 10 per book,” said Meserve. “There’s so much you can bring back.”

Meserve also likes the idea of running a themed series of films. “You could do one on gardens,” he said as an example. “There are so many things you can do if you know your audience.”

Summers will continue to be dominated by new family-friendly fare, such as “Despicable Me 3,” which had a fairly lengthy run recently at the theater. “We are primarily serving a summer population with a lot of kids, six or seven days a week,” Meserve said. “Come winter, we may only be open five days a week. We’ll have to see how it works. The financial reality is there.”

Screening first-run films can be tricky, a “unique problem,” as Meserve put it, for a one-screen theater. Citing the 2017 World War II movie “Dunkirk” as an example, Meserve said that the requirements of showing it say that the theater must run it for three weeks straight – and nothing else. “That really kills us for two weeks,” he said.

Meserve had nothing but praise for current theater owner Jason Sheckley, who has run the theater since 2002 and will continue to run it after the end of September as a salaried manager, employed by the Friends of The Harbor Theatre. Sheckley, he said, referring to the theater’s early days before switching over to digital equipment, is “a genius at making old equipment work. He literally sliced and diced and tinkered to put film back together” in the midst of a screening, Meserve said. He also pointed out that Sheckley has remained so devoted to the success of the theater that at one point he mortgaged his house in order to put up money to keep the venue viable.

“We’ll look to the community for funding,” said Meserve. “We need to bring in an extra $40,000 a year.” Broadening the range of films offered will go some way toward this goal of increased revenue. Half of the $40,000 needed for the coming year has already been raised from Friends of The Harbor Theatre board members, including Meserve and his wife.

“We think that the community will agree that this is an asset that needs to be preserved,” Meserve said. “Long, long range, we’re looking for a multiscreen solution. It could be an expansion into the mall, if space opens up.”

Those who have not had the pleasure of watching a movie at The Harbor Theatre should head to Boothbay Harbor to check it out. The theater has all the perks of a movie theater from earlier days – quaint vintage clips before the film advising one to visit the snack bar and so on; a large, old movie projector and a beautiful vinyl-playing jukebox in the lobby; and, of course, a snack bar featuring the requisite popcorn and boxes of candy. Say hi to the friendly, bespectacled Sheckley, who is likely to be manning the ticket booth.

The Harbor Theatre is located at 185 Townsend Ave., Suite G, Boothbay Harbor, directly across the street from Hannaford Supermarket and conveniently next door to Boothbay Harbor House of Pizza. The theater is online at harbortheatre.net.