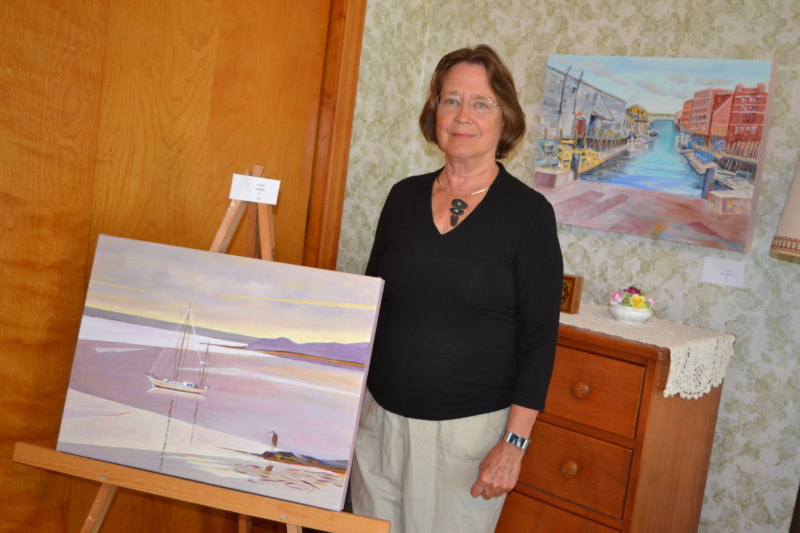 Jean Kigel weekend show: On Friday, Aug. 4, I got to have a sneak preview of Waldoboro artist Jean Kigel’s upcoming “Eastern Views” art show, which will run from Aug. 11-13, from 10 a.m. to 5 p.m. each day. Kigel invited me to tour the show, which occupies most of the rooms on two floors of her Waldoboro home at 176 Winslows Mills Road, aka the Brick House Gallery. The opening reception for her 19th annual “Eastern Views” show will take place from 5-7 p.m. on Friday, Aug. 11, featuring drinks and snacks (and Kigel!) in Kigel’s lovely, expansive, art-filled house.

The prolific Kigel displays numerous paintings in her new and eye-catching geometric realism series in addition to the whimsical pieces in her Attic Windows series, her Asian-brush paintings, and her fascinating gyotaku prints of fish, made by inking actual (dead) fish and printing their images onto paper.

Kigel has divided her house-gallery into categories of paintings and prints by room. Signs identify each room. There’s the “Floral Abundance” room, full of paintings of flowers, and her kitchen has been dubbed the room for “Small Shoreline Oils.” The pieces in the “Lavender Spectrum” room all contain the color lavender, including some nice paintings of orchids. In the bedroom that is called the “Coast of Maine” room, Kigel offers, among other things, a lovely watercolor called “Ah, Monhegan,” of Monhegan Island in the distance as seen from Pemaquid Point. “Pemaquid – my favorite of all places,” she said.

The “Animal Kingdom” room includes some particularly nice paintings of lobsters, starfish, and chickens, including “Free Range,” a painting of a chicken on Yupo paper, which causes the feathers to “pop” in a pleasing way. “I grew up on a poultry farm and I had a pet monkey as a kid,” Kigel told me. “A capuchin monkey.” 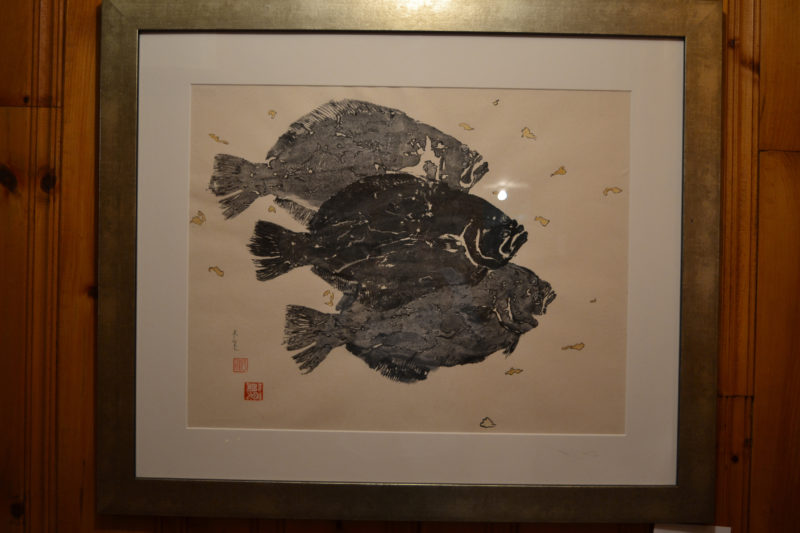 Jean Kigel’s gyotaku print of flounder, made by printing with an actual fish, is called “Holding Ground.” (Christine LaPado-Breglia photo)

Kigel seems excited by her ongoing “Attic Windows” series, focused on the many different styles of attic windows she has encountered in towns around Midcoast Maine. “I grew up in a house with an attic. I love attics,” she said. “I spent hours up there as a child.”

Perusing Kigel’s many paintings offers one an in-depth look at the animals, flora, and topography of a number of areas where Kigel has spent time in Maine. “Camden Hills from North Pond,” “Cruising Moosehead,” and “Burning Clary, Warren,” of blueberry barrens on Finntown Road in Warren, are all worth taking a good look at. So are “Early Run Warren” and “Muttoning Clouds Brunswick” in her “Attic Windows” series.

Visit Philippe Guillerm Gallery: Those who have not had the pleasure of checking out the offerings at Philippe Guillerm Gallery, at 882 Main St. in Waldoboro, should consider going there on Saturday, Aug. 12 for the opening reception for the gallery’s “From Our Sea” art show during ArtWalk Waldoboro, which runs from 4-7 p.m. Guillerm, who is an incredible sculptor of found wood, will be in his studio-gallery space during this time, as will his most delightful wife, Jacqueline Guillerm, who tells interesting stories about the couple’s yearly wood-gathering travels in the Caribbean by boat.

Tickets for Weymouth’s concert are $8. Go to sheepscotgeneral.com for more information. Every Friday is also pizza night at Sheepscot General, from 5-7 p.m. If you haven’t tried the awesome pizza there, you really ought to.