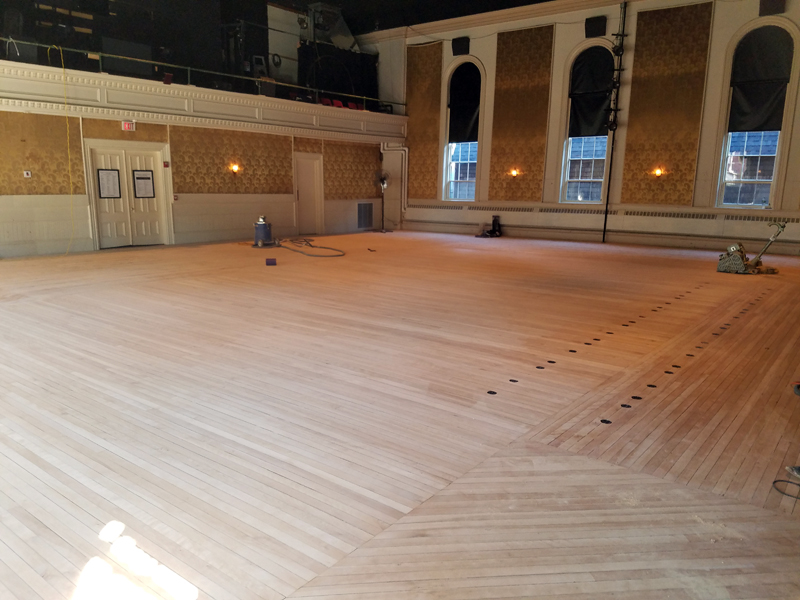 The Lincoln Theater floor after sanding. The refinished floor will make its debut when the theater reopens Friday, Sept. 8. (Photo courtesy Andrew Fenniman)

Lincoln Theater in the limelight: As readers have no doubt noticed, Lincoln Theater in downtown Damariscotta has been closed for a number of days while the theater’s wood floor is sanded and revarnished. It will reopen in all its new glory on Friday, Sept. 8 with the screening of the 2017 film “The Big Sick.” Based on a true story, the film, which stars Kumail Nanjiani and Zoe Kazan, is about a Pakistan-born comedian who falls in love with an American grad student. Movie-rating website rottentomatoes.com gives it a whopping 98 percent approval rating on its Tomatometer.

Before Lincoln Theater closed its doors for renovation, it hosted its annual membership meeting, in partnership with Maine Public, on the evening of Tuesday, Aug. 22, treating meeting attendees to the first Maine screening of “The Vietnam War,” the newest movie by Ken Burns and Lynn Novick. Maine Public President and CEO Mark Vogelzang was on hand to speak to the assembled crowd before the film was shown.

“This year, the theater, in partnership with Maine Public, screened the first look in the state of Maine at the newest film by Ken Burns and Lynn Novick, ‘The Vietnam War.’ Excerpts were shown of various episodes from the 18-hour series that debuts on PBS in September. 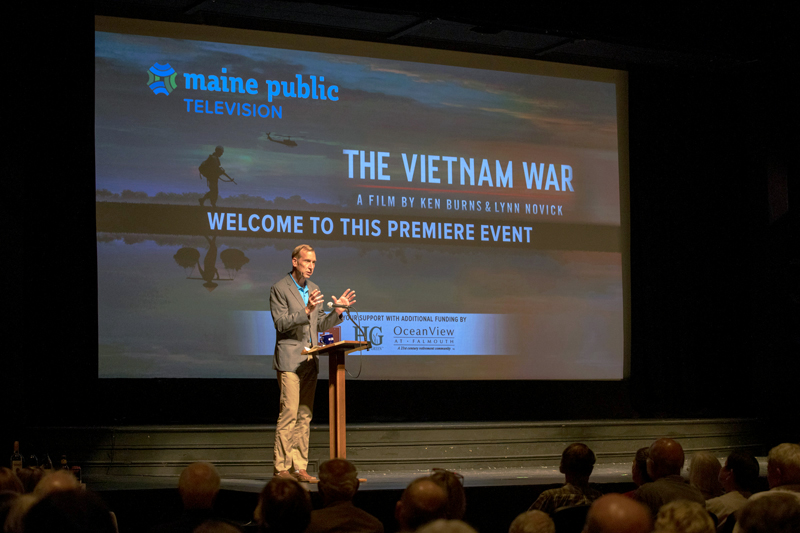 “When the screening concluded, a deeply heartfelt panel discussion was held, moderated by Adria O. Horn, director of the Maine Bureau of Veterans’ Services, with a brief question-and-answer session held with the audience as well. It made for a thoughtful, heartfelt, difficult, wonderful evening. As one member wrote, ‘When I left last night, small groups were standing outside talking about how moved they were and wanted to share their thoughts with each other. It truly was a service to the community.’ Another noted, ‘Watching the preview of the documentary then hearing the panel speak was incredibly moving. I wish the whole community could have been there. It was an exceptional experience and I feel very proud to have been a part of it.’”

Sherrill weighs in: I reached out to another arts-related executive director, Cathy Sherrill at the Opera House at Boothbay Harbor, for her thoughts on the post-summer-vacation entertainment season coming up at the lively venue.

“With school starting up, the focus for many in the region will become the classroom and the playing fields, but there is still loads of fun coming to the opera house stage this fall, and more than a few reasons to get homework done early in the day,” said Sherrill. “Evenings hold the satire and hilarity of The Bobs in their farewell tour on Oct. 14 and Grammy-winning country with Rodney Crowell and his band on Saturday, Sept. 23. Dougie MacLean, the highly-awarded Scots singer-songwriter, brings his Highland folk sound to the stage on Sept. 17, while 13-time Dobro Player of the Year Rob Ickes travels with Trey Hensley to Boothbay Harbor on Sept. 14.

“From the old-time sound of the Sweetback Sisters to the stormy Le Vent du Nord blowing in from Canada, there are performances aplenty in the weeks ahead. Come, stay up late, listen to sounds from around the globe, and enjoy the historic Opera House at Boothbay Harbor this fall.”

I have not yet attended a show at the Opera House at Boothbay Harbor since moving to Maine from California last year, but I intend to soon. The talent scheduled at the venue is consistently top-notch.