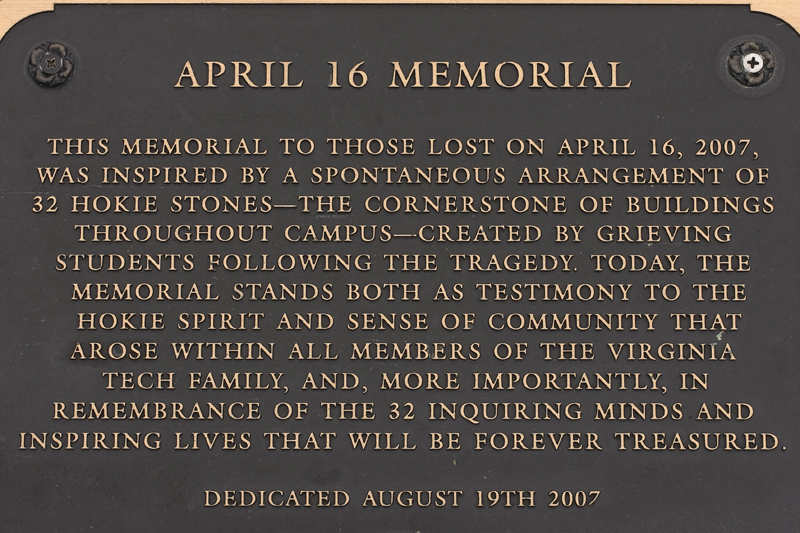 A plaque at Virginia Tech honors the 32 students and faculty members who were shot and killed by a student armed with two semiautomatic pistols. “Guns in USA” documentary producer Tom Mathews traveled to Blacksburg, Va., where Virginia Tech is located, to record voices speaking about gun violence in the United States on Oct. 1, the same day that Stephen Paddock opened fire on a country music concert in Las Vegas, killing 58 people. (Photo courtesy Tom Mathews)

Tackling a touchy subject: The words on Tom Mathews’ business card read as follows: “Communicate your perspective in a calm manner, using clean vocabulary, without attacking groups or individuals with hatred.” These are good guidelines for participants in a documentary project dealing with one of the thorniest issues in the United States – guns and gun violence.

Mathews, a 48-year-old resident of Atlanta who works full time as a gardener, is the one-man crew behind the ambitious, largely self-funded “Guns in USA” project, currently featuring online audio recordings reflecting people’s views on guns in America. He dropped off his card at The Lincoln County News recently while touring through Maine recording voices for his project. A dozen people in Lincoln County have participated so far.

I reached Mathews by phone last Wednesday, Nov. 1, while he was on location in Harrisburg, Penn., to discuss “Guns in USA.”

Mathews said he started his recording project, which gives first-name-only anonymity to participants, in July of last year, “following the nightclub shootings in Orlando … While I was working in people’s gardens for the next two to three weeks, my mind went to that (incident) every day.”

Perhaps fittingly, Mathews started recording his first participants in northwestern Florida while on a family vacation.

Mathews starts out his recorded interviews with the question “When I say ‘guns in the United States of America,’ what are your thoughts?”

“I think the hot topic would be like debate over, right now, banning certain assault weapons, assault rifles,” said Benjamin, one of those early voices. The shooter in the Orlando incident was armed with a semiautomatic rifle and a semiautomatic pistol.

Another Florida interviewee, Carmen, whose husband is a hunter and owns a rifle, said, “I suppose with the average Joe having a gun, I do have an issue with that.”

Joe, a 53-year-old construction worker from Stone Mountain, Ga., had this to say in March regarding guns: “I feel I need to own one, with the way the world’s getting … Growing up, I never had a care of having a gun. I didn’t think you’d need it. But the world just went crazy now.” 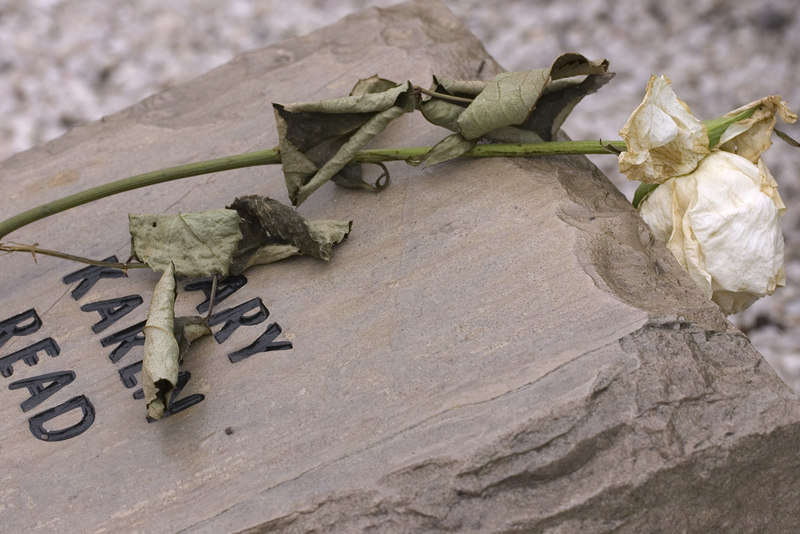 A white rose lays atop the Hokie Stone honoring the life of Virginia Tech student Mary Karen Read, one of 32 Hokie Stones in the April 16 Memorial at Virginia Tech in Blacksburg, Va. (Photo courtesy Tom Mathews)

Mathews plans to record people’s takes on guns in all 50 states, a project that has no end date in sight. So far, in addition to Florida, Georgia, Maine, and Pennsylvania, he has interviewed people in Colorado, North Carolina, and Virginia, for a total of about 150 participants.

Among Mathews’ Georgia interviewees are state Rep. Mary Margaret Oliver, D-Decatur, and state Sen. Elena Parent, D-Atlanta. When Oliver’s and Parent’s responses go online, they will not be anonymous, as the women are public figures, Mathews said.

Mathews said he wants “to create a space where people can listen” to one another on the subject of guns in the U.S. in an attempt to “build a national dialogue on one of the most contentious subjects in our nation.”

He believes that the discussion on guns in America is “so much less about the object (the gun), but about human dynamics … What causes an individual to become part of a headline regarding a (gun-induced) fatality?”

A number of interviewees have raised the issue of having gun safety training in schools, especially in urban areas where children are not growing up learning gun safety from family members who hunt, Mathews said. Video games, he added, have been mentioned by some as encouraging (virtual) gun use without the necessary respect for and rules of gun ownership that go along with learning to use an actual weapon.

Mathews plans to eventually produce a book and a film incorporating the audio interviews he is compiling.

“I don’t have the answers,” said Mathews of the current gun-use debate, “but I firmly believe the answers are in all of our voices.”

Mathews plans to be back in Maine roughly next spring to record more perspectives on gun use and ownership for “Guns in USA.”

Listen to audio clips and learn more about the “Guns in USA” project at gunsinusa.com, including how to donate to the project’s GoFundMe account. To contact Mathews about participating in his documentary project, email guns.in.usa2017@gmail.com.