Hercule Poirot hits Lincoln County theaters: After being invited a number of times by Jason Sheckley, who manages Harbor Theater in Boothbay Harbor, to attend technical screenings of films opening at the theater, I finally took him up on his invitation the morning of Thursday, Dec. 14. On tap was the brand-new film “Murder on the Orient Express,” directed by and starring Kenneth Branagh.

I’m a big fan of Agatha Christie’s charming character Hercule Poirot, so I figured I just had to go and check out his latest incarnation.

I had the cozy theater all to myself, which was nice. Sheckley even made me a cup of coffee – also nice.

As “Murder” was scheduled to run Dec. 15-20 at Harbor Theater, and the date of the next print version of The Lincoln County News was Thursday, Dec. 21, I ran my review of the film online. 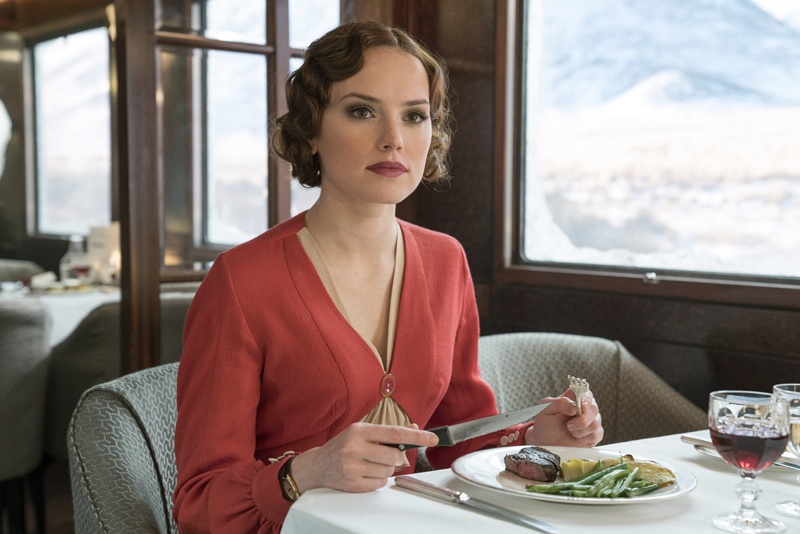 Daisy Ridley stars as Mary Debenham in the 2017 version of “Murder on the Orient Express,” directed by Kenneth Branagh, who also stars as Hercule Poirot.

But the very same film will open at Lincoln Theater in Damariscotta on Friday, Dec. 29 and  run through Thursday, Jan. 4. So, here is my review in print as it originally ran (minus the Harbor Theater dates and times):

Aficionados of the dapper, shiny-black-mustachioed David Suchet version of Hercule Poirot in the long-running British TV series “Agatha Christie’s Poirot” will find a somewhat different take on the Belgian superdetective in the brand-new film “Murder on the Orient Express.”

Branagh’s Poirot is as detail-oriented and polite as Suchet’s Poirot. For instance, his obsession with perfect four-minute eggs for breakfast extends to measuring their height in their egg cups, in the hopes that they will be both exactly the same size. Early on, when the two eggs served to Poirot by a young boy are of different sizes, he states simply and graciously: “I blame the chicken.”

Poirot ends up on a train – the Orient Express – with a cast of characters that will all end up as possible suspects in the murder that is discovered on the train after it is stalled by an avalanche.

Black-and-white flashback scenes, bird’s-eye shots, and grand, panoramic views of  miles and miles of snow-topped mountains in the early morning sun make for eye-pleasing viewing. Close-ups on characters as they are being questioned effectively add to the drama as the story unfolds.

Depp’s aging appearance (in real life) works perfectly for the scarred, rough crook he plays in “Murder.” Cruz, as the born-again Pilar Estravados, is low-key, even a little stern. Lucy Boynton, as a barbital-addicted Countess Elena Andrenyi, is quite charming.

Dench plays Princess Dragomiroff. Arguably stellar in any role she plays, Dench is just a hair on the unbelievable side as Russian royalty, as her British accent remains prominent despite her attempt to sound Russian. Similarly, American actor Leslie Odom Jr.’s portrayal of Englishman Dr. Arbuthnot is not entirely credible, as his American accent slips through every so often.

British actor Olivia Colman does a wonderful job as Hildegarde Schmidt, the German assistant to Dench’s demanding character. In one scene, she and Branagh carry on a conversation in fluent German  – credibility kudos to them.

In his typical fashion, Poirot sits all the suspects down at the end of the film – at a long table in a scene that visually calls up the Leonardo da Vinci painting “The Last Supper,” to address them one by one, as he reveals the guilty party, or parties, as the case may be.

On the surface, “Murder” is a whodunit movie. On another level, though, it is an elaborate commentary on the nature of justice and how it is served in its most pure form.

Branagh and screenplay writer Michael Green, of “Blade Runner 2049” fame, have given us a story worth viewing on a number of levels.