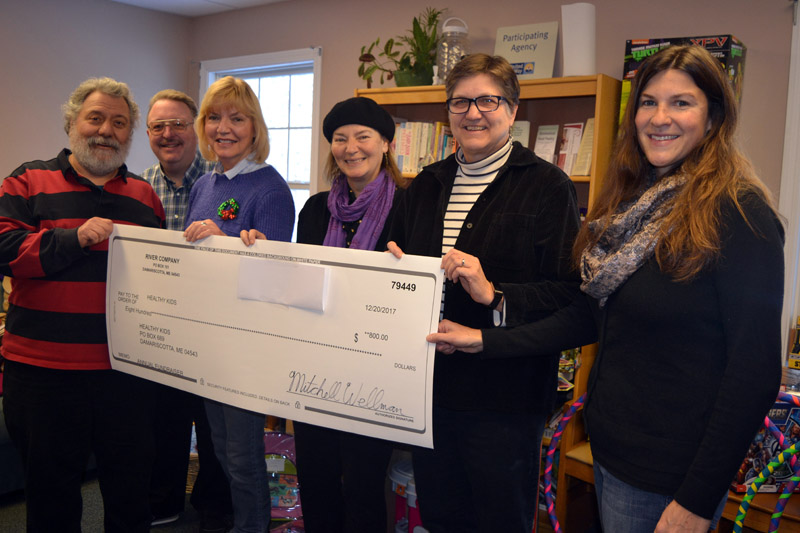 Thespians raise money for Healthy Kids: River Company President Mallory Adams invited me to a noon event at the Healthy Kids office in Damariscotta on Wednesday, Dec. 20. The occasion was the presentation of an $800 check from the local theater company to Healthy Kids, whose mission is “to prevent child abuse and neglect in Lincoln County,” according to its website, healthykidsmaine.com.

River Company had partnered with Skidompha Library to present “A Christmas Carol” on Dec. 9 as its annual fundraiser, with the proceeds going to Healthy Kids, Adams said.

The backstory: “On Dec. 9, River Company staged its eighth annual fundraiser with two performances of an adaptation of Orson Welles’ 1939 Christmas Eve radio broadcast of ‘A Christmas Carol,’” said Adams. “The show was directed by Nick Azzaretti (and) produced by Phyllis McQuaide, and River Company Treasurer Mitchell Wellman starred as Bob Cratchit and was the sound technician. Skidompha Library Director of Development and Communications Torie DeLisle assisted with production and promotions.”

“The show was the final production of River Company’s 20th season and its first as the official resident theater company of Skidompha Library,” said Adams. “River Company has been performing in Skidompha Library’s Porter (Meeting) Hall since 2002 and recently partnered with Skidompha Library with the hopes of presenting more shows together beginning in 2018.”

Some quotes to ponder going into 2018:

“Celebrate what you want to see more of.” – writer Tom Peters

“And now we welcome the new year. Full of things that have never been.” – Rainer Maria Rilke

“Cheers to a new year and another chance for us to get it right.” – Oprah Winfrey

“One resolution I have made, and try to always keep is this: to rise above the little things.” – naturalist and writer John Burroughs