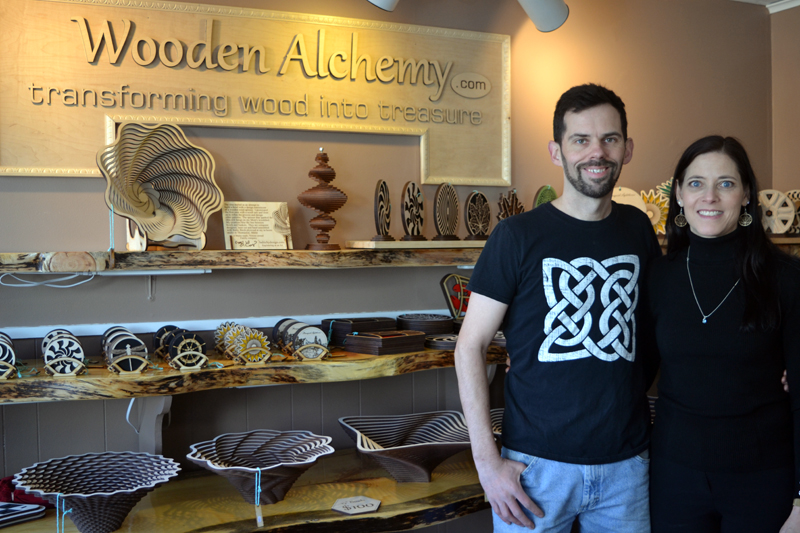 Downtown lowdown: Things are quickly heating up on the downtown Damariscotta art scene. In my last column, I wrote about amazing artist (and very nice person) Phoebe Dean, who recently began working at Buzz Maine. Now, I am just as excited to tell readers about self-taught Thomaston wood artist Rob Jones and his wife, Barbie Jones, who opened Wooden Alchemy last Wednesday, April 4 in the Main Street space formerly occupied by River Gallery.

A Google search of Rob Jones’ name yields, among other links, a link to a fairly lengthy article in Woodworker’s Journal from June 2011 featuring a photo of Jones kneeling behind a table on which sits the giant lobster he made from curly maple and the two trophies and prize ribbons – five blue and one purple – he received upon showing it. He ended up selling the sculpture – which he made from wood essentially foraged from an acquaintance’s woodpile – for a whopping $8,000.

One of the pitch-perfect bugles Rob Jones has made of wood is a replica of President John F. Kennedy’s Bach Stradivarius funeral bugle, which was commissioned by retired U.S. Air Force Master Sgt. Jari Villanueva, who has played taps at Arlington National Cemetery countless times. (Watch a video of Villanueva playing this incredible-sounding bugle at youtube.com/watch?v=HVMVtrvtArQ.)

You see what I’m getting at.

Rob Jones is the real deal.

Wooden Alchemy is an art gallery and a storefront for the many, varied, and stunning wood creations he makes – from intricate laser-cut lobster trap coasters and maple-leaf earrings to candle holders, Christmas ornaments, and shadowboxes to musical instruments, furniture, and an exact replica of a single zippered boot.

For a lot of his work, Rob uses high-end Baltic birch plywood, fashioning it into elaborate, eye-catching pieces that “blur the line between bowls and baskets,” as his in-store artist statement says. “They are computer-designed, laser-cut, and hand-assembled.”

Rob, a 43-year-old U.S. Navy veteran, also makes wooden wall plaques of the official seals of each branch of the U.S. military. Barbie is a veteran of the U.S. Army.

Rob has had a thriving wholesale business for his work for a number of years (his customers include the Owls Head Transportation Museum in nearby Owls Head, the Smithsonian, and San Francisco’s de Young Museum), but now he adds a brick-and-mortar storefront and gallery, which is technically owned by Barbie.

“He told me last year, ‘I am going to give you a gallery for your birthday,’” said Barbie on Thursday, April 5. “My birthday was Tuesday; we opened Wednesday.”

“This is her business,” Rob told me.

“He’s my supplier,” she said, laughing.

Both Barbie and Rob are a lot of fun to talk with. Get Rob to tell you some of the many stories about his life and work on any Sunday from noon to 5 p.m., when he is guaranteed to be there (and not working at his wholesale business in Thomaston).

Wooden Alchemy will host an open house from 3-6 p.m. on Saturday, April 14.

Wooden Alchemy is located at 79 Main St. in Damariscotta. It is open Tuesday-Sunday from 10 a.m. to 5 p.m. Find Wooden Alchemy online at woodenalchemy.com and on Facebook.