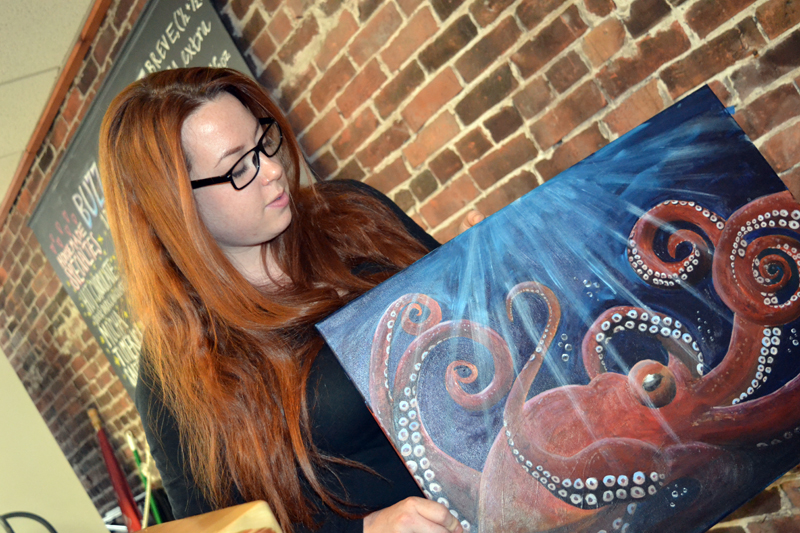 Painting in snowstorms: Samantha Merrill held up a small acrylic painting of an ocean scene. “This I painted during a snowstorm when I had nothing else to do. I wanted something with waves and it just kind of happened,” she told me recently.

Making art seems to come naturally to the 27-year-old barista at Buzz Maine in Damariscotta.

“I’ve been drawing for as long as I can remember,” Merrill said. She has been painting for about 10 years.

Merrill, who lives in Jefferson, attends Southern Maine Community College, where she studies marine biology. She hopes to work in the field of rehabilitation of marine mammals after she completes her studies.

Merrill said she uses all of her spare time when she is not at school or working to paint. Her 5-year-old daughter, Madeline, paints with her “a lot,” she said. One of Madeline’s pieces – a colorful abstract painting — currently hangs on the wall at Buzz Maine.

Merrill’s interest in marine biology is evident in her artwork. In addition to ocean landscapes, she has painted a whale and an impressive red octopus beneath a deep-blue sea lit by sunbeams. She is currently at work on a painting of a sea turtle.

Merrill said that whenever she learns some new information about a sea creature, she becomes “almost obsessed.”

The octopus painting “came about because I had just learned that they can recode their RNA, which blew my mind,” Merrill said. “The octopus was in my head for a while. It quickly became a fascination of mine.”

Merrill held up another painting, this one a landscape featuring green trees and a small brown cottage in gentle yellow light. “I really liked the light in this one. I like how soft it is,” she said. “This one was also made during a snowstorm.”

In snowstorms, she pointed out, “all other obligations are on hold. You really just finally have that time” to paint.

Merrill said she loves the work of iconic Maine painters Andrew Wyeth and Winslow Homer, largely because of their use of light. She strives to get “good light” into her own work. “I really love getting good light into my paintings,” she said.

Merrill certainly achieves “good light” in her beautiful, big octopus painting, which, incidentally, has no title.

In fact, none of Merrill’s paintings have titles.

When I talked with Merrill, she had recently shown her work at the Art by the Kennebec show in Richmond. She said she “spent a good chunk of time” during the two-day early-April show working on her new still life of flowers in a vase.

“I do a lot of landscapes and I really wanted to do something different,” Merrill said of her foray into still lifes, adding that she created the painting “from my head.” She said that while she enjoys taking photographs, she never paints from a photo.

Merrill said she was pleased with the end product, her new still life. “I liked the contrasting colors of blue and purple and salmon,” she said, smiling.

Keep up with Merrill’s painting pursuits on her Facebook page, Art by Samantha Merrill.