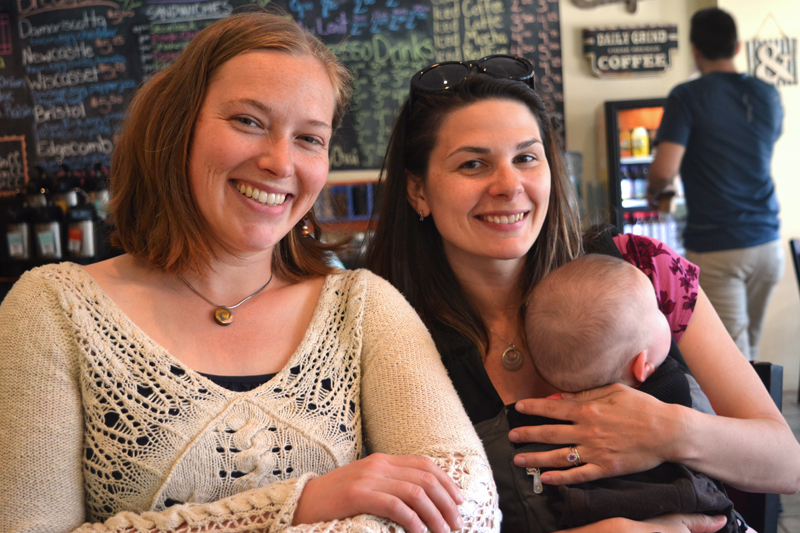 Torie DeLisle and Mallory Adams (with her baby, Willow) are excited about the new collaborative partnership between Skidompha Library and River Company. (Christine LaPado-Breglia photo)

‘Re-visioning’ local theater: I recently got to hang out in the cafe at Sherman’s Maine Coast Book Shop in Damariscotta with Torie DeLisle and Mallory Adams (and Adams’ very cute and cooperative baby, Willow). Many people know DeLisle as the development director at Skidompha Library and Adams as president of the River Company Board of Directors.

The two enthusiastically wanted to tell me about the recently formed  partnership of the library and the theater company. Notably, River Company has been named Skidompha Library’s official theater company in residence. DeLisle has also become the new vice president of the theater company’s board. Veteran local actor and director Nick Azzaretti has joined the board, too, which also includes Christine Andersen, Lainey Catalino, Allison Eddyblouin, Andrea Handel, Tom Handel, Judy McQuillen, Suzanne Rankin, and Mitchell Wellman.

DeLisle, who has a background in theater, said she “really wanted to see more theater and more performances at the library.”

“It sort of all came together,” she said. “What if we pooled our resources? What if we gave the River Company a home, a permanent space to perform in?”

Adams said that since its inception, River Company, now going into its 21st season, has almost always staged its plays at Skidompha Library. So it made sense to make the library its permanent home.

“The partnership highlights the connection around our mission, because we both want to do these productions for our community and we want to reflect the conversations in the community, in the world,” said DeLisle.

Along those lines, the theme for River Company productions this year is “Year of the Woman.” “With this theme, the company plans to focus on plays written by and/or about women and women’s issues,” said Adams.

River Company recently held open auditions at the library for its summer production of William Shakespeare’s “Taming of the Shrew,” which will kick off the new season on Friday, July 27 with a six-show run.

“We are not altering the text,” DeLisle said, “but we’re examining the play by placing it in a modern context and in modern dress.”

Some women will be playing male parts, she noted – just the opposite of the way plays were staged in Shakespeare’s time.

“I think that ‘Taming of the Shrew’ kind of gets a bad rap … as denigrating women,” said DeLisle. “It was not Shakespeare’s intention for it to be this down-with-women kind of thing.”

“The ‘re-visioning’ is about opportunity. We want to provide opportunity to local people to get involved,” said Adams.

In the fall, the company will present a pair of one-act plays, “Trifles,” by Susan Glaspell, and a reworked version of Mary Shelley’s “Frankenstein,” by Vincent S. Hannam, which focuses on Frankenstein’s wife. This year marks the 200th anniversary of the publication of the original “Frankenstein.” Performance dates for the one-acts are Oct. 18-20 and Oct. 25-27.

River Company’s ninth annual Christmas fundraiser will be a production of “The Best Christmas Pageant Ever,” by Barbara Robinson, directed by Ellie Busby and produced by Allison Eddyblouin. Open auditions will take place on Friday and Saturday, Sept. 21 and 22.

“All of us, individually and collectively, are part of networks of other theater companies,” said DeLisle, who has also been involved with Heartwood Regional Theater Company. Adams is on the board of Lincoln Theater, home to resident theater company Lincoln County Community Theater.

“It would be super sweet if Damariscotta were known as the theater capital of Midcoast Maine,” she added. “I mean, I would love that!”

For more information on River Company, go to rivercompany.org or email rivercompanytheater@gmail.com.