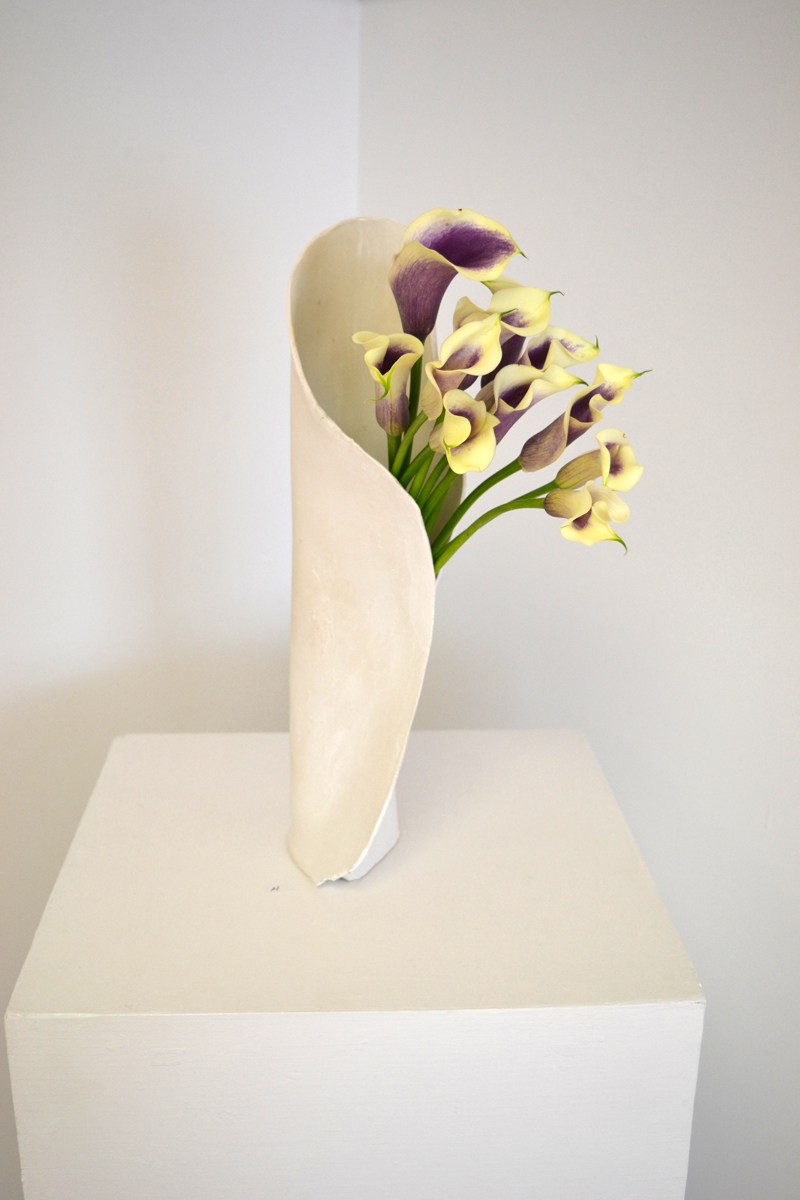 Art and reverence: I get tips on a fairly regular basis about cool art that I should check out, tips that I take seriously and that I appreciate. Recently, I was told by two people whose artistic taste I have a great deal of respect for — Newcastle ceramicist Liz Proffetty, who heads up Neighborhood Clay in Damariscotta, and Bremen painter Michael Blaze Petan – to take a look at the current show, “Convergence,” up in the West Gallery at River Arts in Damariscotta. They both thought that I would like it.

I put what I had originally intended to write about on the back burner, as this show closes on Wednesday, June 20, and headed over to River Arts.

Upon entering the West Gallery, I was struck by the smell of flowers, similar to the slightly heady fragrance one associates with a flower shop. This was in addition to the relaxing visual of the serene natural light in the room and the abundance of white – of the walls, the pedestals, and Wright’s hand-built vases.

A feeling of reverence welled up inside me.

Wright’s pieces – many containing those flowers I was smelling – hang and stand alongside Sirois’ encaustic metal-assemblage pieces. Together, they present a unified grouping of artwork that speaks to the soul – of beauty, of salvation, of the importance of reflection in a quiet space.

Sirois, as she puts it in her artist statement, has as her artistic aim “to challenge the lens in which we view something that is worn, used, broken down, or disregarded.” She has resurrected numerous pieces of cast-off metal – wire, nails, rusted metal hoops of varying sizes, pieces of a Maine license plate, a chunk of metal that is so decayed as to be unidentifiable – and given them a new life with a whole new meaning.

Sirois’ “Emerge” features what might have been a hinge in a previous life centered in a frame, over which a piece of rusted painted metal is placed, looking very much like a primitive face, purely a result of the process of decay.

One piece by Sirois, seemingly untitled, is an encaustic work featuring that unidentifiable piece of metal I mentioned earlier. In this somewhat whimsical piece, the frayed metal chunk takes on the appearance of an odd little sea creature floating in the opaque, cream-colored “water.” Sirois aided this interpretation with the addition of three subtle bubbles and spindly green seaweed-like lines partially visible through the wax.

Wright, who works part-time creating floral arrangements at Flowers at Louis Doe in Newcastle, created numerous vases for this show from slabs of stoneware clay. “As the clay is rolled out, it takes on a distinctive size, shape, and character of its own,” she writes in her artist statement. “These attributes dictate how it will be formed and folded. The vessels take shape as they please, as though the clay itself decides how it wants to be reshaped, with Stephanie as its guide.”

Wright, who recently returned to making art after a four-year hiatus due to her health battle with late-stage Lyme disease, presents the viewer with pieces that are perfect in their imperfection. The vase exteriors have matte finishes and bear numerous random lines left over from the plastic onto which the clay was pressed. And it is the interiors of most of them that are glazed, not the exteriors. Wright has, in effect, turned her pottery inside-out.

Wright’s subtle touch – both with pottery-making and with flower-arranging – is epitomized in her beautiful single vase containing purple-and-cream calla lilies. The asymmetry of the presentation and the fact that the lilies mimic the shape of the vase remind one of the sublime beauty to be found in naturally created objects, whether made by Mother Nature or by the hand of an artist willing to give up some measure of control.