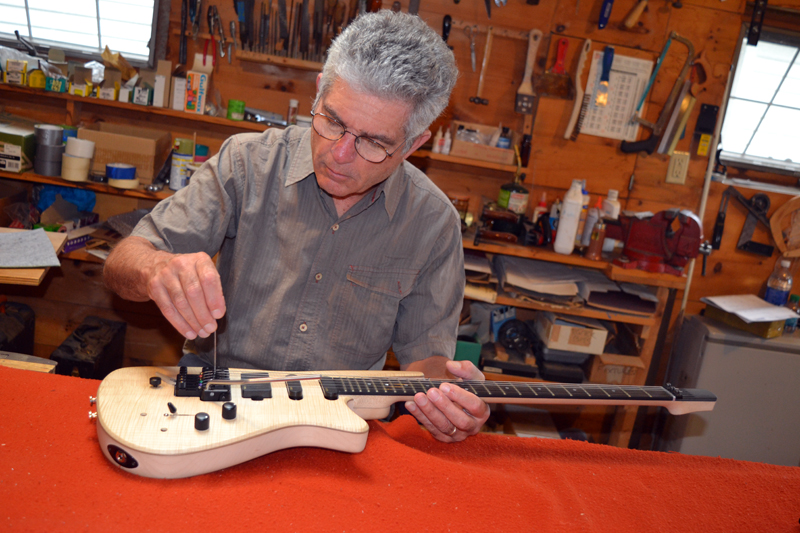 Ned Steinberger adjusts the bridge on a guitar in his Nobleboro workshop. (Christine LaPado-Breglia photo)

Steinberger, whose father just happens to be Jack Steinberger, a Nobel Prize winner in physics, is the man behind NS Designs, which specializes in bowed electric instruments.

Steinberger shot to instrument-making fame in the 1980s with his signature L-series electric basses, distinct for their streamlined cricket-bat-like shape and lack of the traditional headstock. That was back when he lived in Brooklyn, N.Y. and headed up Steinberger Sound Corp., which he sold to Gibson Guitar Corp. in 1987.

Steinberger founded NS Designs in 1990. He moved to Nobleboro in 1995, where he lives with his wife, Dr. Denise Soucy.

I had the good fortune of spending time recently with Steinberger in his workshop in a converted barn, where he creates prototypes for future NS Designs instruments.

“I never intended to be a businessman. My goal was to design things,” said Steinberger, a very low-key, likable man. In addition to his NS Designs work, Steinberger does “a lot of design work for other companies,” he said, much of it for widely known company D’Addario & Co. Inc., for whom he designs tuners and capos. 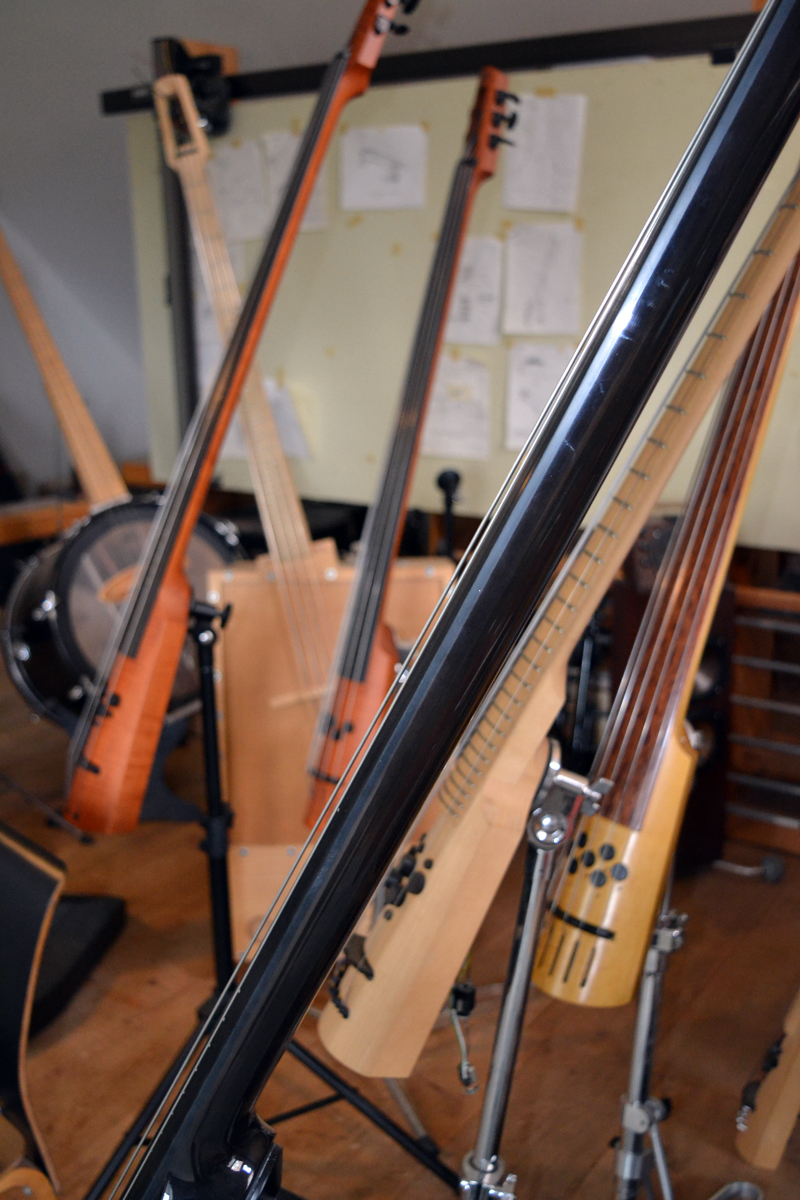 A profusion of basses in the loft area above Ned Steinberger’s Nobleboro workshop. (Christine LaPado-Breglia photo)

“I had no idea what it meant to run a business when I started out,” Steinberger said. “I thought running a business was going to be boring – and I was wrong.”

On the subject of his renown in the music world, Steinberger said in his understated way, “I started out not being known at all,” noting that he “could not have started out in Nobleboro,” as New York City was basically a necessary hub for his inroads into the music world at the time.

“Of course, the internet is the big liberator,” he noted. “You can work where you want to work.”

Steinberger reflected on the meaning of his success: “The most important thing about the success for me is it allows me to develop my self-esteem, and self-esteem is very important.”

Steinberger shared that he had to repeat the fourth grade due to his dyslexia. “That’s not such an easy thing to do,” he said.

“I’ve had a tremendous amount of recognition for my work – more in proportion than I really deserve,” he said quietly. “In that sense, I’m really lucky. It doesn’t seem quite fair, when others who are deserving don’t get recognized.”

Steinberger’s goal with his instrument design work? “To create something of lasting value.”

The most famous rock star to play an instrument designed by Steinberger? “Eddie Van Halen,” whom he described as “very cordial” and “very charming.”

“I love Maine,” Steinberger told me toward the end of my visit. “I know it’s cliche – the noncorporate culture here in Maine. A lot of people here are like me – independent. I like the spirit.”

Steinberger will be a featured speaker at the second annual Maine Luthiers Exhibition & Music Showcase in Hallowell on Friday, Oct. 12. The event runs from Oct. 12-14. Go to hallowell.org/luthiers for more information.