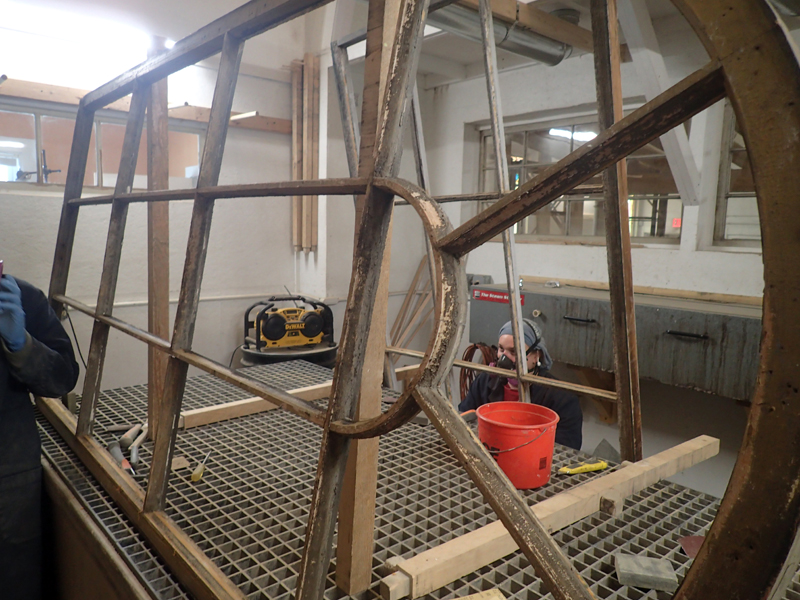 An employee of Bagala Window Works in Westbrook removes old paint from the frame of one of seven 14-foot windows being restored for Lincoln Theater in Damariscotta. (Photo courtesy Andrew Fenniman)

Letting in the light: “We had an amazing tour of the window restoration work this morning,” was the first line of an email I received from Lincoln Theater Executive Director Andrew Fenniman on Wednesday, Feb. 22. He and theater board member Ted Silar had just come from visiting Bagala Window Works in Westbrook to see the progress on the restoration of seven of Lincoln Theater’s 14-foot-tall windows. I visited Fenniman at the Damariscotta theater the following day to chat about the project. 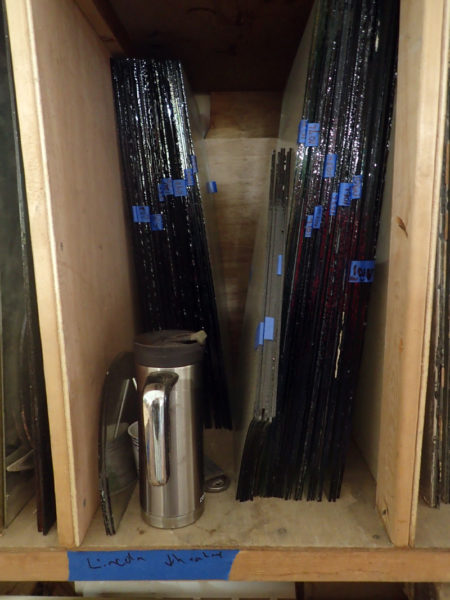 Panes of antique glass removed from Lincoln Theater’s window frames are numbered and will be replaced in the exact same spots from which they were removed. (Photo courtesy Andrew Fenniman)

The same glass will be used whenever possible, but in the case of broken panes, they will be replaced with “new” antique glass. All panes will be reglazed. The removed intact panes “were numbered and labeled and will be put back in the exact same places” they were in originally, said Fenniman, who is clearly excited about the project.

The seven windows being restored are the ones along the sides of the theater – not the ones facing Main Street. When replaced, the restored windows will allow light into the theater space if, say, a daytime business meeting is scheduled, said Fenniman. At other times, when darkness is called for, both the new energy-efficient blackout shades and the current curtains can be employed to shut out exterior light and cold.

“I’ve talked to a lot of people that grew up here and they say they’ve never seen the windows,” Fenniman said. Some of the windows had been painted over black, he said, “and a number were broken.” The restored window frames will be painted black and the outward-facing parts of the blackout screens will be white, creating a striking contrast when viewed from the street. “It’s going to be so cool!” said Fenniman.

“We will be closed the week of May 8,” he said. “That’s when (the windows) are being put back in. We’ll have them in by summer.”

Look for a celebration event shortly after those magnificent windows are reinstalled.

Catching up with Heartwood: Griff Braley, artistic director at Heartwood Regional Theater Company, caught me up on what he has been up to lately. “‘Eurydice’ casting is nearly complete,” said Braley. “We are currently working on the design concept and soundscape, while researching Sarah Ruhl, the playwright, for more insight on her philosophy and style of theater. Folks interested in Ruhl could read ‘1,000 Essays I Don’t Have Time to Write,’ or any of her many plays.”

“Eurydice,” in which Ruhl reworks the Greek myth of Orpheus and Eurydice, will hit the Parker B. Poe Theater stage in late April. Go to heartwoodtheater.org for more information.

Kathi Nordone on stage: Damariscotta singer-songwriter Kathi Nordone and Stella, Roland, and John Couch will perform at the St. George River Cafe, located at 310 Main St. in nearby Warren, from 6-8 p.m. on Friday, March 10 as headliners for the open mic that evening.