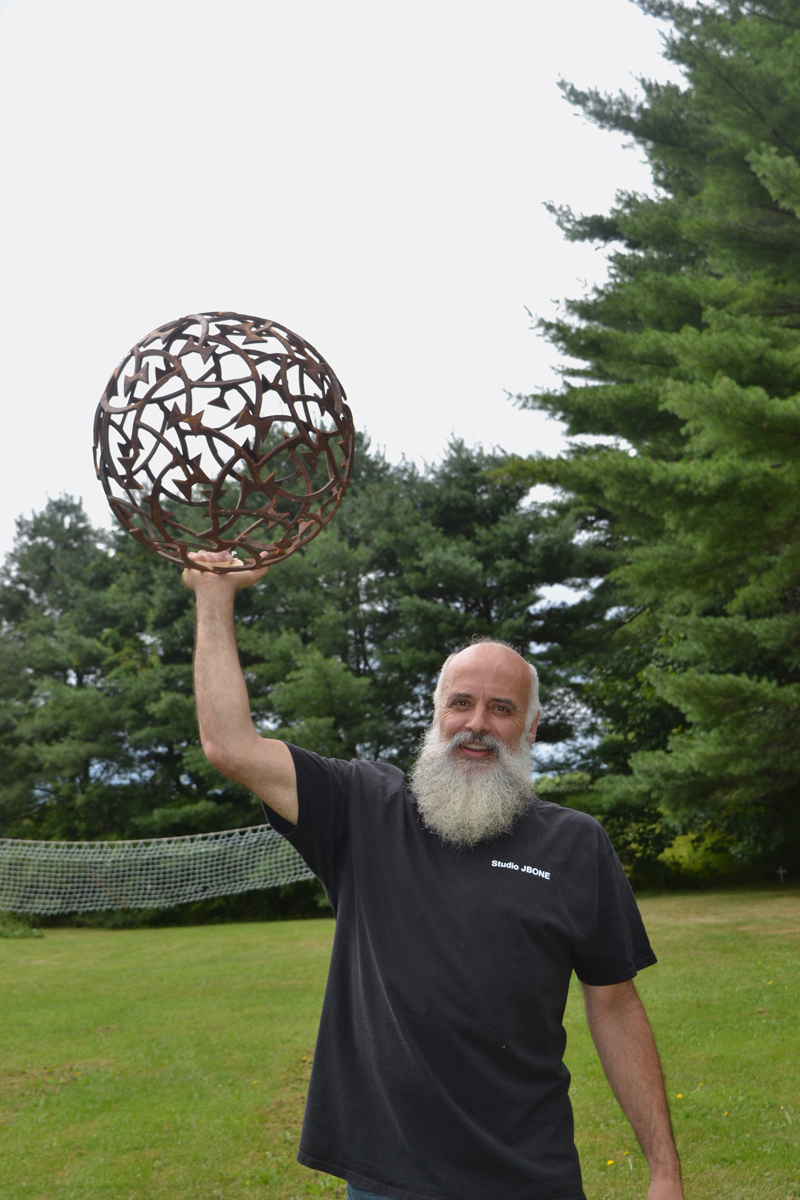 Metal artist Jay Sawyer poses with “Constellation I” on the grounds of Studio JBone in Warren. (Christine LaPado-Breglia photo)

Metal man: Of the 18 sculptures on the new Boothbay Harbor Region Sculpture Trail, only two are made of metal, and they are both made by Warren metal artist Jay Sawyer. Sawyer’s abstract steel sculpture “Ain’t My First Rodeo” stands tall in front of The Opera House at Boothbay Harbor, and “Violent Surrender,” an appropriately twisted and “torn” piece made of rusted metal on a granite base, graces the garden area in front of Bath Savings Institution.

I first met Sawyer, a graduate of Medomak Valley High School and Maine Maritime Academy, and a former Merchant Marine welder, back in late 2016, when I attended his engaging talk at a Waldoborough Historical Society program about his life as an increasingly in-demand metal artist. Sawyer, a very creative and likable man who gravitates toward the use of salvaged metal in his work, is known for such pieces as his “J Walking” sculpture, a large, blue metal “J” with legs, and “F Bomb,” a shiny red “F” atop a round, black, bomb-shaped sphere.

Sawyer’s “A Spirit of its Own,” a large sphere-within-a-sphere metal sculpture, greets visitors to the Portland Jetport from its location on Jetport Access Road.

Sawyer recently invited me out to Studio JBone, his studio and sculpture garden in Warren, in neighboring Knox County.

Walking toward me, Sawyer stopped at “Tread Lightly,” a huge piece made from a skidder tire chain welded to stand upright, as if it were attached to an invisible skidder tire.

Sawyer told me he created the piece as a tribute to his father-in-law who died last year, Waldoboro woodcutter Ronald Nash. “I came to understand the power of art to heal,” he told me, referring to the process of making “Tread Lightly.” Sawyer was just as warm and earnest as I remembered him as he talked to me about his work – how much of himself he pours into it and the respect he has for his materials.

In addition to honoring his late friend, the sculpture gives “an unexpected second life for the chain,” Sawyer told me. “That chain doesn’t want to sit in a dark corner somewhere before it gets melted down.”

Sawyer walked across the grass to stand beneath a massive metal mushroom made “from the belly pan of a water tower, like ‘Petticoat Junction’ or something,” he said, smiling.

“When it came crashing to the ground,” Sawyer said of the tower that stood on the Miller Woolen Mill property in Lisbon, “the bottom was all smashed up, the top was kind of smashed down, but this ‘little’ piece in the middle was all right.”

Sawyer’s satisfaction in rescuing various pieces of metal and transforming them into art is obvious.

He proudly showed me one of his newest sculptures, “The Offering,” an abstract-ish piece resembling an individual holding up what could be interpreted as an arm offering a large ball made of metal “sticks.”

“It straddles the line between abstract and figurative, don’t you think?” he said. I agreed.

We lingered near “Spiritual Influence,” the sphere-within-a-sphere piece that is the sister piece to his sculpture at the Portland Jetport. The piece, part of his Shear Ring series, is made from salvaged shear rings from a demolished airport hangar. It sits near a lovely, peaceful pond.

We spent a considerable amount of time hanging out in Sawyer’s studio discussing future projects (more on that at a later date) and checking out such humorous gems as his silver “Screw U” (yes, a U-shaped sculpture made of screws and bolts) and a smaller version of his “F Bomb,” before Sawyer walked me to my car and I headed back into Lincoln County.

Find out more about Studio JBone at studiojbone.com.