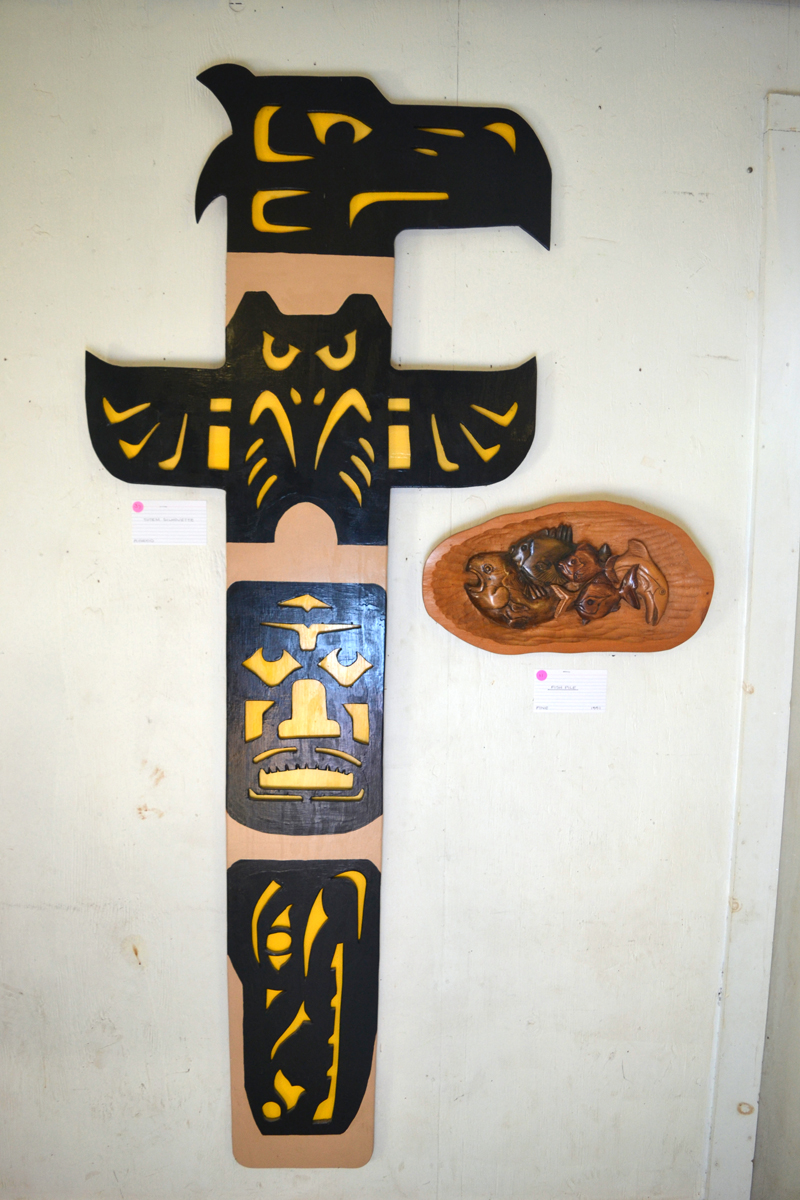 Sweet wood art: Travelers along Route 126 between Jefferson and Whitefield may have noticed the large totem poles at the end of one Whitefield driveway. I have admired them on passing and wondered just who was responsible for such striking work, which reminds me of totem poles I have seen in British Columbia, Canada.

Recently, I had my curiosity satisfied. C. Thomas Sweet, the man who, as it turns out, lives at the end of the driveway, is also a wood carver. He is currently showing his artwork – wood carvings, assemblage pieces, and paintings (and a couple of his smaller totem poles) – at Sheepscot General in Whitefield.

A fair amount of Sweet’s artwork recalls First Nations (Canada) and Native American art, particularly that of the Pacific Northwest, such as his painted “Killer Whale on Moose Antler” and the carved “Mother Bear and Cub” and “Tlingit Shaman Moon Mask.”

Sweet’s affinity for Native American imagery is obvious in his large acrylic painting called “Group of Indian Portraits,” a collage of sorts featuring 11 images that each could have stood alone as individual paintings.

His often imaginative carving skills come to the fore in such pieces as “Stumproot,” a large work made from the root of a tree into which Sweet has carved a bald eagle and added other embellishments. A “before” photograph accompanies the sculpture so one can appreciate the transformation.

“Alien,” a standing wood sculpture of a curious-looking big-eyed creature with a large orange hand wrapped around its face, takes Sweet’s imagination in a playful direction. Similarly imagination-stirring is “Old Man with Hat,” an acrylic painting of a man wearing a gray overcoat and a somewhat resigned expression. He holds a hat in one hand and has his other hand rather mysteriously placed inside his jacket lapel. The streaks of color throughout the background add to the slightly surreal atmosphere.

Sweet’s carved-wood wall hangings are well-done. “Fish Pile” depicts five fish piled up on a platter of sorts. “Robert Mitchum” is a piece depicting the late actor in military uniform, perhaps straight out of the 1964 film “Man in the Middle.” One gets the feeling in viewing the many pieces in Sweet’s exhibit that one is privy to what makes him tick – from his artistic musings on bygone days of Native Americans out West, as in his painting “Indian Sunset,” to the types of classic films that catch his attention.

“Much of my lifetime body of work is too large or immovable, such as the murals on my walls, to be shown at this exhibit,” Sweet was quoted as saying in a front-page article by Genevieve Keller in the September issue of the Whitefield News (an informative newsletter available at a number of locations in Whitefield). “Anyone interested in viewing these would be welcome to visit my home on three Sunday afternoons during the month of September between 2 p.m. and 4 p.m., at 65 Jefferson Road in Whitefield.” The remaining Sundays he is available are Sept. 16 and 23.

An opening reception for Sweet’s show will be held from 4-6 p.m. on Friday, Sept. 14, when one can meet the artist and talk to him about his interesting work. The reception fortuitously overlaps with Sheepscot General’s Pizza Night, which runs from 5-8 p.m. (Tip: The venue’s gourmet sourdough-crust pizza – served only on Friday evenings – is so delicious and in demand that it’s a good idea to call in your order ahead of time to basically eliminate the wait time.)

Sheepscot General is located at 98 Townhouse Road, Whitefield, and is online at sheepscotgeneral.com.