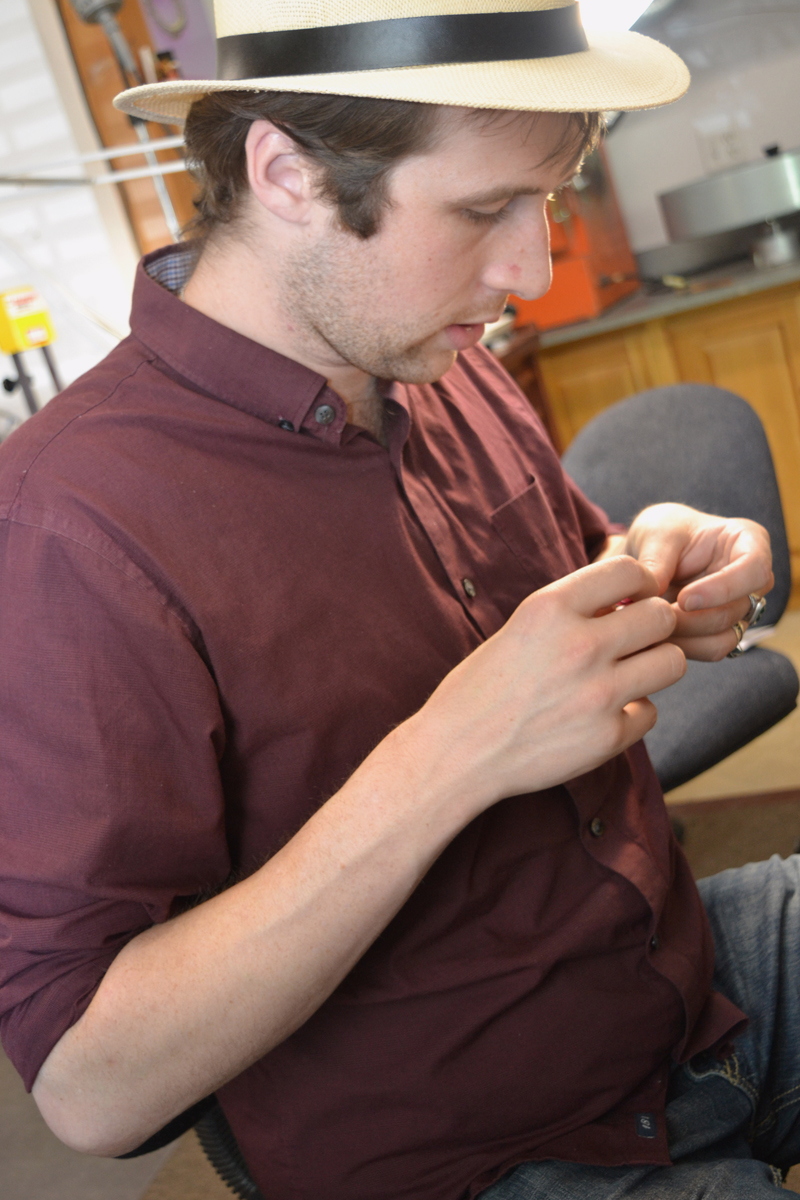 The artistic life of Joe Lugosch: Last Thursday afternoon, I entered the cozy studio space of jewelry designer, jewelry maker, and actor Joe Lugosch at Peapod Jewelry in Edgecomb to find him at work on a carved-wax prototype of a maple leaf pendant.

I had written a story for the LCN back in May about the expansion of Peapod’s studio space due to its increased online business and I thought I’d check in with Lugosch to see how things are going – with Peapod and with his other artistic endeavors. I have found from past experience that chatting with him is a pretty pleasant way to pass time.

He proceeded to describe in his captivating way how he had cut a small block of wax from a larger block of wax, wrapped the piece of paper on which he had drawn the leaf around the small chunk of wax, and, using a straight pin, pricked the outline of the leaf into the wax’s surface. Then he used a tiny saw and tiny files and rotary burrs to carve and hollow out the delicate-looking leaf, which looks like two pieces put together but isn’t, due to Lugosch’s skillful carving.

The maple leaf is part of a new line of limited-edition pieces offered by Peapod and designed by Lugosch. When completed, it will join last year’s pumpkin pendant and the recently unveiled owl pendant celebrating the upcoming Pumpkinfest in Damariscotta.

Lugosch has been working at Peapod Jewelry for about two years. He came on board at the urging of his mother, Ronna Lugosch, who owns the business. In a relatively short time, he has gone from doing production work such as finishing and polishing to designing unique pieces of jewelry.

“There was a period of time when I was definitely intimidated,” Lugosch said of his early forays into jewelry-making.

But his clay and sculpture classes from his younger days served him well. “Form makes sense to me,” Lugosch said. “I came in basically ‘blind,’ but I think I felt like ‘I can do that.’ My mom needed a jeweler. She started testing my skills and she realized that I was very proficient.”

“She always says I learn through osmosis,” he added, laughing.

Of his Peapod work, Lugosch said, “People really love the peapods. It’s more than just jewelry – it’s sort of an ‘experience,’ and people like feeling like they’re part of the ‘pod.’

“It is extremely rewarding – we see how much the peapod means and we hear all these stories about people’s families. And they are not all happy stories; some of them are sad stories.”

Lugosch got philosophical: “Physical symbols can help people create and hold onto meaning.

“I think part of it for me, there’s not only being able to create whatever I want, it’s also the challenge of creating something that’s beautiful, recognizable, and functional.”

Lugosch likened the satisfaction of making jewelry to the satisfaction he derives from acting. “I like the direct joy of having feedback from people,” he said. “I think it’s multiple levels of thrill … When I’m in the theater, there’s the thrill of being able to get into the character. There’s the thrill of being able to present the character in a way that is accessible to the audience. And there’s also that immediate and powerful thrill you get from the actual performance – or the piece of jewelry. The process and the product are all very important parts of it.”

Lugosch is at work on a personal line of jewelry outside of Peapod. Look for his silver yin-yang pendant and his cleverly named “Bitcoin” pendant at Sensi Sensei in Jefferson. Like Peapod jewelry, which features “pearls” that stand for a person’s birth month, a Bitcoin pendant can be made from a penny featuring the particular year a person was born.

On the acting front, Lugosch has a ecouple of shows coming up with River Company: he will play Dr. Frankenstein in “Frankenstein” and will appear in “Trifles” at Skidompha Library in late October.

Peapod Jewelry, located at 40 Route 1 in Edgecomb, is online at peapodjewelry.com. Sensi Sensei, located at 50 Rockland Road in Jefferson, can be found on Facebook.