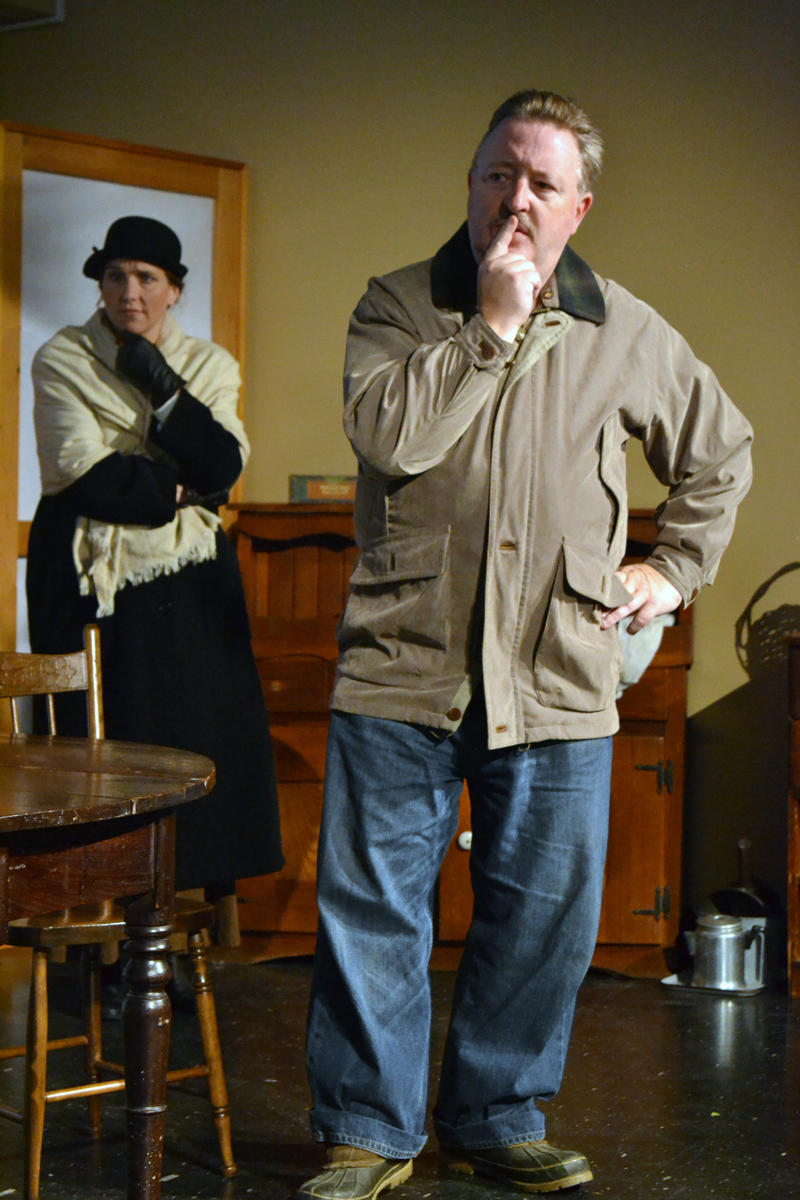 River Company one-acts: Last Wednesday, Oct. 17, I attended the dress rehearsal for the one-act plays that River Company is currently in the midst of staging in the Porter Meeting Hall at Skidompha Library in Damariscotta. “Trifles” and “Frankenstein,” directed by Ruth Monsell and Torie DeLisle, respectively, feature some well-known local names, such as Sumner Richards, Mitchell Wellman, and Joe Lugosch. Lugosch stars in both plays – as the county attorney in “Trifles” and as Victor Frankenstein in “Frankenstein.”

“Trifles” was written by the late Susan Glaspell, who, according to British theater critic Michael Billington, is “American drama’s best-kept secret.” It was first staged in 1916.

According to the program notes, written by Monsell, “Trifles” is “loosely based on a 1900 murder and trial in Iowa, one Glaspell knew well as a young newspaper reporter … Not really about trifles at all, it is about moral choices. How do we act on the knowledge we have? When does the right thing outweigh the letter of the law? How do male and female perspectives differ? What happens when one sex patronizes or underestimates the other?” To say that “Trifles” is a feminist play would not be incorrect.

The director and cast do a fine job of setting the mood and time in the short whodunit period piece. Wellman is strong as a farmer named Mr. Hale. His character has some effective lines, such as when he answers the question “What did he die of?” with “He died of a rope around his neck.” Or: “Women are used to worrying over trifles,” which likely hits most audience members as trivializing the lives that women lead.

All three male characters in “Trifles,” in fact, serve to drive home Glaspell’s point that men suffer from culturally supported self-importance that gets in the way of seeing certain things as they truly are, and that looks at women’s pursuits and viewpoints as less significant.

Lugosch, as usual, is entertaining. His “Trifles” role takes good advantage of his more comedic, camp side, as he offers an almost caricatured portrayal of his character.

Similarly, Lugosch’s portrayal of Victor Frankenstein in Vincent Hannam’s 2017 stage adaptation of Mary Shelley’s classic book “Frankenstein” mines his more philosophical tendencies (as anyone who knows Lugosch knows he has).

Missie Liu plays against expectations as The Monster, giving this “Frankenstein” a feminist twist. And Mike Lee, making his acting debut as Captain Walton, is fabulous, convincing Irish accent and all.

“I was pleasantly surprised by the size of the audience and how well they seemed to respond,” said Monsell following the dress rehearsal. “I feel very fortunate to have such a talented, experienced, and dedicated cast. Four of the five I’ve had the pleasure of directing before.

“I particularly like that this ‘little gem’ isn’t really about trifles at all, but strikes some timely, contemporary chords.”

My only complaint is that I thought “Trifles” was a little too short, ended a little too abruptly, but that is the way Glaspell wrote it.