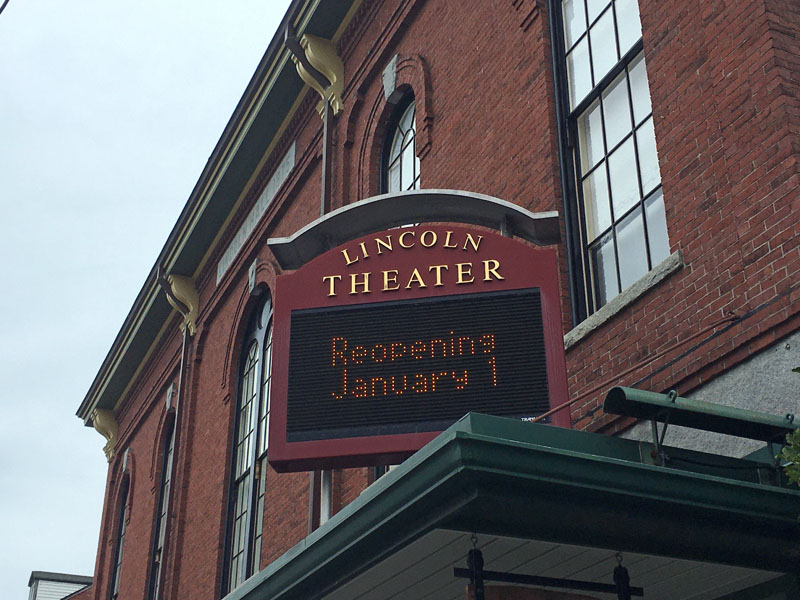 The board of Damariscotta’s historic Lincoln Theater has unanimously approved a targeted reopening date of Jan. 1, 2021.

In June and September of this year, the theater engaged with the community through an online survey regarding what would make patrons feel safest when returning to events at the theater. The information, gathered from approximately 600 participants per survey, was incorporated into the theater’s reopening plan.

In comparing the results from September to June, the most recent survey revealed that respondents’ top priorities for “feeling safe and comfortable returning to events at the theater” remained consistently the same, though their order of importance changed slightly.

These six priorities include:

-Restrooms cleaned after each event has started;

-Ability to avoid long lines of people; and

-Ability to sit with friends/family

The September survey results also showed that people are feeling more concerned now about coming back to the theater than they were in June and that, as the cold months return and people move inside, addressing issues of ventilation and masking becomes even more important.

As part of Lincoln Theater’s reopening plan, the theater is upgrading its ventilation system so that the entire air mass will move through filters, UV-C lights, and a bi-polar ionization airborne disinfection system approximately every ten minutes, or six times an hour. It will also fully replace the inside air with outside air twice an hour, with roughly 30% of the air being replaced every ten minutes.

The theater is also installing a user-friendly online ticketing system that creates a contactless process allowing for advance ticket purchases, seat selection, and self check-in. The system will enable patrons to sit together with friends and family all the while automatically generating six feet of social distancing between other parties. The ticketing process also acts as a secure contact tracing system.

Other upgrades include installing 13 new hand sanitizing stations throughout the building and renovating the public restrooms so that they are as touchless as possible and accessible to only one person at a time.

The theater plans to reopen slowly and conservatively. For example, in the beginning, no concessions will be sold, and we will require masks to be worn at all times by both patrons and staff. The public will be updated more and more throughout the fall about new plans and protocols.

Links to the survey results and summary comparison can be found on the Lincoln Theater Facebook page.