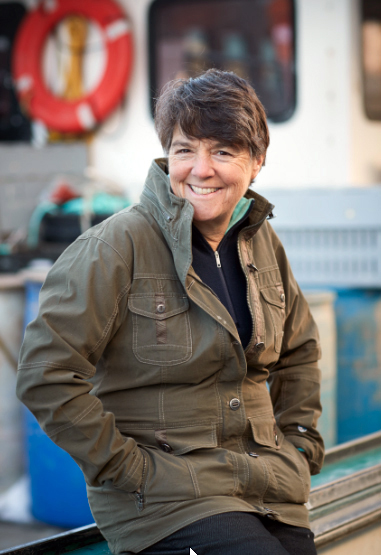 On Wednesday, June 7 at 10 a.m., New York Times bestselling author Linda Greenlaw will once again speak at Skidompha Library, at 184 Main St. in Damariscotta, as part of its Chats with Champions series. Greenlaw will discuss her newest mystery, “Silver Hitch,” the third in her Jane Bunker series.

While Greenlaw is best known for her nonfiction, her mystery series combines her excellence at writing about Maine and the ocean with a talent for telling a good story. In “Silver Hitch,” Jane Bunker thought she would escape the pollution, noise, and dead bodies of the big city when she left her job as a Miami homicide detective and moved back to the idyllic town of Green Haven, Maine. But through her work as a marine insurance investigator, it appears she has left behind the bustle of the city, but not the murder.

When Jane is called to the remote Acadia Island to assess the damages from a house fire, she also finds a badly burned body in the charred rubble. It turns out that the victim is the owner of the house, a wealthy woman who happens to be one of the most hated women in town. As Jane investigates further, she becomes embroiled in a plot as thick as New England clam chowder, involving convicted felons, a real estate scam, and the deep conflicts between the locals and the summer folks. Author Sebastian Junger said, “Greenlaw proves that she’s as skillful as a mystery writer as she is a fishing boat captain — and that’s saying a lot.”

Greenlaw stepped on board her first commercial fishing vessel at age 19. It was a swordfish boat, out for 30 days at a time. She signed on as a cook to earn cash for college. Upon graduating from Colby College as an English major in 1983, Greenlaw began fishing year-round. According to Greenlaw, her parents were not happy about her decision to become a commercial swordfish fisherman as they believed she would be wasting her education.

Three years later, in 1986, she was named captain of the 67-foot swordfish fishing boat Gloria Dawn as the only female swordfish-fishing boat captain on the East Coast. In 1991, Greenlaw, then the captain of the Hannah Boden, was fishing with a companion boat, the Andrea Gail. She was the last person to speak with the captain of that boat whose tragic loss was the feature of Sebastian Junger’s bestseller and subsequent film, “The Perfect Storm.” Greenlaw was prominently featured and praised in both book and film. The widespread fascination with commercial fishing and the seas led to Greenlaw being featured as captain of the Hannah Boden on the Discovery Channel, “Swords: Life on the Line.” In 1997, Greenlaw began lobstering on her 35-foot boat, the Mattie Belle.

With Junger’s success on the bestseller’s lists, Greenlaw began receiving calls from publishers to pen her own book, leading to the birth of “The Hungry Ocean.” This book rose up on the New York Times bestsellers list, the first of her three books to achieve that distinction, “The Lobster Chronicles” and “All Fishermen Are Liars” being the other two.

Greenlaw’s writing has included additional titles about commercial fishing, two cookbooks co-authored with her mother, Martha Greenlaw, and two additional mysteries in the Jane Bunker series. In 2013, Greenlaw published “Lifesaving Lessons: Notes from an Accidental Mother,” an intimate memoir about her becoming a mother at the age of 46. Greenlaw was the recipient of the American Library Association’s Alex Award, the U.S. Maritime Literature Award, and the New England Book Award for nonfiction.

In addition to becoming a parent later in life, Greenlaw married in September 2012 at age 51 to Steve Wessell, owner of Wesmac Custom Boats. Raised in the Bath area, she currently resides in both Isle au Haut and Surry, Maine. Her current lobster boat, the Earnest, is a 41-foot vessel that she fishes inshore for lobster and halibut.

After her talk, Greenlaw will sign copies of her books, made available by Sherman’s Maine Coast Book Shop.

Chats with Champions is a free community offering. For more information, call 563-5513.