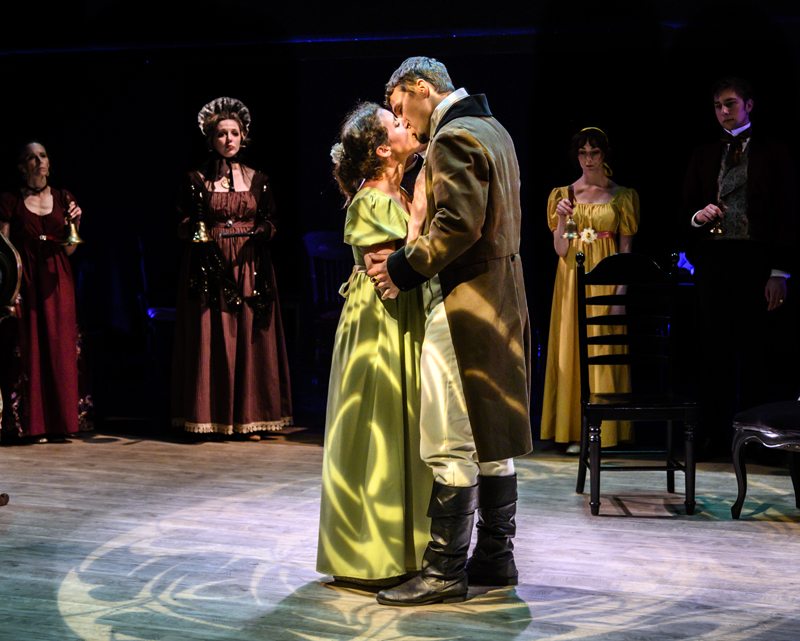 An exhilarating version of “Pride and Prejudice” sparkles on the Parker B. Poe stage at Lincoln Academy through Aug. 7, in Heartwood Regional Theater’s first full-scale live production since 2019.

Just four days before its premiere, the company canceled a sold-out run of “Guys and Dolls” in March 2020, due to the COVID-19 global pandemic.

There’s a thrill only live theater can bring to an audience, especially welcome after a year and a half of shuttered stages and too many Netflix binges.

Griff Braley, Heartwood’s artistic director, said, “I didn’t want to come back in and do doom and gloom. I love dark drama, but I just felt this was the thing to start with. It has a core theme of love.”

Joy Braley reminded him, “You said it was a joyful way to reenter.”

This version of “Pride and Prejudice” was written by award-winning New York playwright and actress Kate Hamill.

The play is a fresh and lively version of the novel with a contemporary approach that remains true to Austen’s regency sensibilities and underlying themes. It premiered at the Hudson Valley Shakespeare Festival in 2017, and soon became one of the most produced plays in the country.

“I think this script stands up as a piece of literature in its time and place,” Griff Braley said. “Hamill has her own sense of humor that permeates the entire piece.”

A variety of stylistic devices modernize the original work without removing the audience from the time frame. “That idea that the old is new and the new is old – there’s a sense of lightness and comedy in that,” Griff Braley said.

“It’s a tricky play. And it’s tricky for the actors because they really have to shift gears sometimes from the chaos that Hamill wants in the scene to something that feels more like you’re seeing a direct adaptation of Austen,” he said.

“Hamill says, ‘I want my actors to speak the lines as fast as they can think them.’ That was my primary direction for the whole show. Faster.”

Elizabeth Bennet and Mr. Darcy may be the central love story, but the play is more an ensemble piece than a star vehicle, despite any expectations set by the Keira Knightleys and Colin Firths of movies and BBC productions.

While Jenny Brown is an expressive delight as Lizzy Bennet and Ray Huth is beautifully brooding as Mr. Darcy, the rest of a talented cast produces many moments of broad humor, clever wit, exacting mannerisms, and, when called for, subtle emotion.

“They are really reacting to one another, not just waiting to do their lines,” Joy Braley said.

“Theater is not film. Theater is not novel. Theater is not anything except theater. This script doesn’t work on its own. It’s the energy and the pacing that the actors bring that brings those characters truly to life,” Griff Braley said.

“There’s no more tomorrow,” he said following the last dress rehearsal on Wednesday, July 28. There’s a sense of regret in his tone and it is clear he enjoys the process of producing the play as much as the premiere.

But the cast is eager to react to an audience; to be live – to feed off that energy. “The audience is the last cast member. They just show up really late,” Griff Braley said.

The production is an open concept with minimal props; chairs and tables are swiftly switched between scenes. The back of the stage in shadows is filled with characters waiting their turn in the spotlight, a silent Greek Chorus that fades in and out with the stage lights.

Joy Braley said there are certain aspects of the play that feel different, that jolt the audience out of the gentle lull of Austen’s world. “They make you look again and in studying the play you see that she uses that comic stuff to really good effect to suddenly deliver you into the dramatic scene.”

Jenny Brown, the show’s lead actress, “has been in a couple productions with us,” Griff Braley said. “I went to see her in a production in Portland. I watched her development and when this part came up, she seemed like the right person for it.”

“Nanette Fraser (as) Mrs. Bennet, I’ve worked with her bunches of times. Our audience loves her. She’s a really gifted actress and she’s an absolute team player. I would cast Nanette in any show,” he said.

Regarding the theater space, Joy Braley said that while it has its challenges, “that communal aspect of it is palpable.” The proximity to the stage and the proximity to each other is part of the experience.

“One of my favorite things is to watch the audience,” she said.

“Our audience wants high quality stuff,” Griff Braley said. “They want to see fully realized shows with competent actors. And the community wants us to do student education as well – they want to see kids growing.”

Griff Braley teaches film and theater at Lincoln Academy. Education is a primary focus for Heartwood, and includes summer camps for middle and high school students, workshops geared for all ages, and an ongoing internship program that teaches the elements of stagecraft and production.

Heartwood’s audition process is open, though, and many local actors from the community fill the roles. The theater also attracts actors from outside Lincoln County when needed, some from as far away as California, Florida and Texas.

Heartwood started out with a lavish production of “Les Miserables” in 2003.

Over the years Griff and Joy Braley produced plays as diverse as “Beowulf,” “Sweeney Todd,” “Enemy of the People,” “Arsenic and Old Lace,” and “Charlotte’s Web.”

Asked what play he most aspires to tackle, Griff Braley chose “Hamlet.”

“I think ‘Hamlet’ should be the last play any director ever directs – I think it’s the hardest play there is,” he said. “Of any great piece of literature I think ‘Hamlet’ contains most of the ideas that humans have to deal with – all in one play. And you need a spectacular Hamlet.”

After the footlights fade and “Pride and Prejudice” takes its place among the long list of Heartwood productions, Griff Braley will go into his office “for probably three days and just read scripts. It’s like chess pieces. I just keep moving them around the tabletop until I see this is a season.”

The 2022 season for the Heartwood Theater may see a version of “Oklahoma.”

But it probably won’t see “Hamlet.” Not yet.

“Pride and Prejudice” runs at 7:30 p.m. Wednesday, Aug. 4 through Saturday, Aug. 7, at Poe Theater. Tickets are $5 for students and $30 for adults. For more information, call the box office at 563-1373 or email info@heartwoodtheater.org.