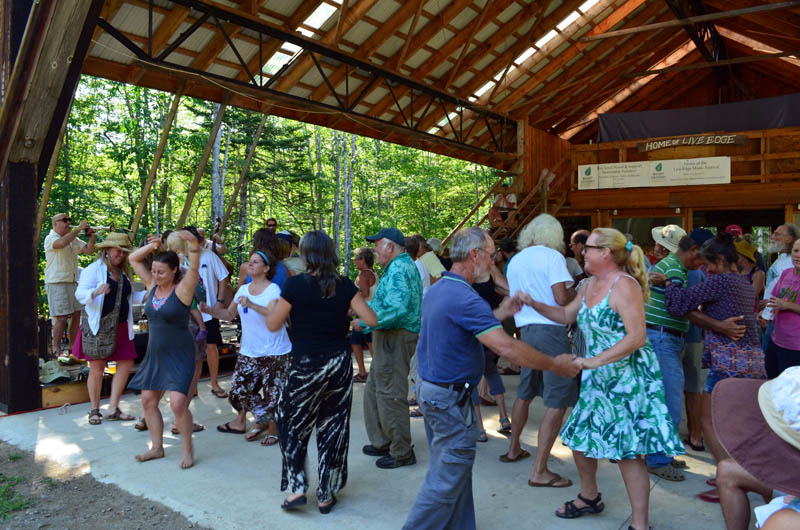 Audience members dance to the music of Primo Cubano during a previous edition of the Live Edge music festival at the Hidden Valley Nature Center in Jefferson. (Photo courtesy Midcoast Conservancy)

Live Edge is a fun-filled day of live music, great local food and beer and wine set in the midst of HVNC’s 1,000 acres of trails, pond shore frontage and bogs. This year’s all-Maine musical line-up includes Primo Cubano, The Gainers, The Hot Suppers and Papa Tim and the Desperate Man’s Blues Explosion.

The Hot Suppers are beloved musicians of Waldo County who meld captivating original music with their favorite rock, blues, old country, and Americana tunes for a sound that is dynamic, harmonic, rhythmic, and electric! Each member of the band lends strong lead and harmony vocals to the mix. The band includes Annadeene Fowler, with Russ and Travis Lloyd on guitars, Tom Fowler on mandolin and baritone sax, Jeff Densmore on percussion, Adam Nordell on bass, and John Pranio playing country fiddle and bluesy harmonica.

The Gainers are a band of local musicians rocking the stage with a combination of original songs and classic covers. With Graham Walton on guitar and vocals, Griffin Han-Lalime on bass and vocals, and William (Thumper) Fulton on drums, no one can stay in their seat when the Gainers are playing.

Led by vocal powerhouse Papa Tim, a wildly enthusiastic entertainer and soulful balladeer with a voice described as “equal parts Baptist preacher and bluesman” and backed by a “supergroup” of area-based musicians, the Desperate Man’s Blues Explosion brings their incredible talent and musical prowess to the stage with a selection of original jams and some twists on a few popular favorites that are guaranteed to have everyone in the audience clapping, dancing, moving, and grooving right along.

Perennial favorites Primo Cubano need no introduction. Their son music is the most popular style to come out of Cuba and is the primary contributor to the blend of Latin styles today known as salsa. Guitarist Paul D’Alessio learned to play son music on a guitar-like instrument native to Cuba called the tres and subsequently formed Primo Cubano.

Trumpeter Marc Chillemi also plays percussion and sings on the choruses. Lenny Hatch plays the congas, the bongo, and other percussion instruments. Eric Winter sings and plays maracas and is the newest addition to Primo Cubano. Last but not least, Duane Edwards joins in on the bass.

As in past years, for $20, advance ticket buyers will receive a voucher good for up to $20 on a second entrée at nine fantastic restaurants: Slates, Liberal Cup, River House, Me Lon Togo, Damariscotta River Grill, Newcastle Publick House, Best Thai, A-1 Diner, and Ada’s Kitchen.

Festival entry is practically free once the voucher is used. Tickets are available now at midcoastconservancy.org, and are available for in-person purchase at Mexicali Blues and Sheepscot General Store.

Live Edge is supported by long-time sponsors Cribstone Capital, Ames Supply and Mexicali Blues; proceeds from Live Edge support Midcoast Conservancy, an innovative conservation organization whose mission is to protect and restore vital lands and waters on a scale that matters. For more information, go to midcoastconservancy.org, Facebook/midcoastconservancy.org, or call 389-5150.