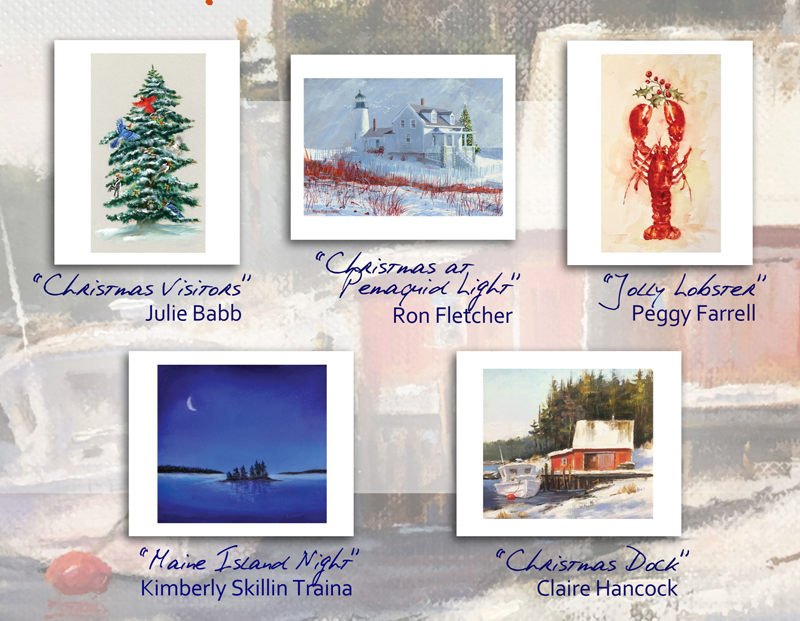 Packages contain eight cards, either all of one image or as an assortment.

Babb was born in New York City, but went to Mexico City as a very young child.  She attended the Lycee Franco-Mexicaine and completed two years at Mexico City College, now called the University of the Americas.  Babb moved to Maine in 1962, and met and married her husband, Bruce, that same year.  They moved to Rochester, N.Y. in 1963 for Bruce Babb’s employment with Eastman Kodak Co. After almost 30 years with Kodak, Bruce Babb took early retirement and the couple moved back to Maine in 1992.  They have two daughters and three grandchildren.

Julie Babb’s love of nature has always been a part of her life. Growing up in Mexico, she was surrounded with birds, animals, and flowers all year round.  Drawing and painting were always present in the home, as her mother, father, and sister were all artists.  Babb enjoyed art as a hobby, but her interest grew as her children got older and she had more time to pursue it.

While in Rochester, Babb began to take various courses at the University of Rochester’s Memorial Art Gallery. Her focus was on classical drawing, color theory, and portraiture.  After moving to Maine, she decided to make art a full-time career.  Babb has taught many courses in the community, including “Drawing for Kids” at Round Top Center for the Arts in Damariscotta, adult education “Sketching from Nature,” “Introduction to Gouache,” and “Calligraphy & Illustrated Manuscript”; and classes in basic drawing for both Elderhostel and Senior Spectrum.

Babb’s work has been featured in many exhibitions, including a one-woman show, “Our Maine Birds,” at Coastal Maine Botanical Gardens in Boothbay. Babb continues to teach painting and drawing classes at River Arts in Damariscotta and she also gives private lessons.

Babb has won numerous awards for her work, which can be seen seasonally at Pemaquid Art Gallery, on Pemaquid Point, and online at covehousestudios.com.

Farrell is largely self-taught and developed her talent attending workshops and community education programs in Pennsylvania, New Jersey, and Massachusetts.  Art has always been a pursued interest and has included exploring mediums such as stained glass and calligraphy. Farrell has painted in oils and spent a number of years studying decorative and tole painting techniques.

But it is watercolor that has evolved as Farrell’s favorite and most natural medium. She has gained more insight into the watercolor medium by studying with Maine artists: the late Jean Harris, Maude Olsen, Hannah Ineson, and Julie Babb. Farrell’s watercolor technique is continually developing and she has recently experimented with the medium of gouache (opaque watercolor).

Maine is Farrell’s primary source of inspiration. There is no shortage of artistic stimulation from the harbors on the coast, in the rolling farmlands, in the small villages, and in the changing seasons.  Farrell’s realistic and light-filled paintings reflect an appreciation for the landscape and its distinctive architecture.  She is often moved to paint old barns, sheds, and rural homes, as well as harbor and waterfront scenes. Monhegan Island is often a focus of her work.

With gardening as a favorite pastime, not surprisingly a number of Farrell’s paintings spotlight floral and garden themes. She delights in the colors and special light that the Maine coastal landscape provides. Her portrayal of light and strong sense of color are hallmarks of her work. Farrell has recently been focusing on painting birds, possibly a reflection of her bird-watching interests.

When asked, “Why do you paint?”  Farrell responded, “When I am painting, I’m just quietly me and I cherish that time.”

Miles Memorial Hospital League reprinted the late Ron Fletcher’s card again this year in memory of Fletcher and the many beautiful, original works he painted over the years to benefit LincolnHealth.

Fletcher was born in Boston and was educated in and around the city. He graduated from Vesper George School of Art in Boston in the late 1960s.

Fletcher spent his earlier years painting on the seacoast of New Hampshire while operating a fashionable picture frame business for over 40 years in the town of Rye, N.H.

Fletcher moved to the Bristol village of New Harbor and opened Fletcher Gallery. After his first year in New Harbor, he fell so in love with the area that he never wanted to move away. His inspiration came from the working harbors, lighthouses, island coves, and craggy coastlines all within minutes of Fletcher Gallery.

Painting professionally for over 50 years, Fletcher’s work is hanging in numerous corporate collections as well as private collections throughout the United States and abroad.

Bremen artist Claire Hancock has no trouble finding inspiration to nurture her lifelong love of painting. She merely needs to spend an afternoon browsing through crowded shelves of local thrift stores, antique shops, or the attics or cedar chests of neighbors and friends.

Fringed with nostalgic memories and cherished objects, Hancock’s Simple Pleasures series marries the past with the present by bringing salvaged treasures, needlework, and natural objects together in pastel paintings that evoke wistful emotion.

Painting was merely a beloved hobby for Hancock until 1996, when she left a job she liked to pursue the pastime she loved. Only a year later, she was juried in as a member of the Pemaquid Group of Artists and her works are now displayed in private and corporate collections across the United States.

Hancock’s awards include a 2012 Hilton Head Plantation Art Association Best of Show award and a Best of Show in Maine’s Art in ME show, also in 2012.

Hancock is a member of Damariscotta’s River Arts and also Pemaquid Art Gallery, where her original work can be viewed throughout the summer. Email her at dhancock@midcoast.com.

Kimberly Skillin Traina was born in Maine and raised in Massachusetts, and graduated from the University of Massachusetts Dartmouth with a degree in design and photography.

Since 1985, Traina has owned and operated a design and photography business, originally in Massachusetts, and now in Edgecomb.

In 2011, Traina wanted to develop a creative expression that didn’t involve working on a computer. Working with soft pastels allows her to work with her fingers, feeling the medium as she applies layers of color. She loves the intensity of the colors of soft pastels, which are made of pure pigment. By layering and brushing away, pushing and pulling the medium, Traina captures a feeling, a quality of light, the essence of a moment in time found in nature.

If Traina is not painting en plein air, she starts with a photograph she has taken, but the end result is always its own story. She hangs her pastels in her studio for months, picking them up to add a color or change a shape until the story that wants to be told is complete.

Painting keeps Traina connected and focused, living in the moment, reminding her she has a choice in how she views the world around her. As an artist, it is her hope to ignite a spark, stimulate a response, and convey her passion for living in Maine.