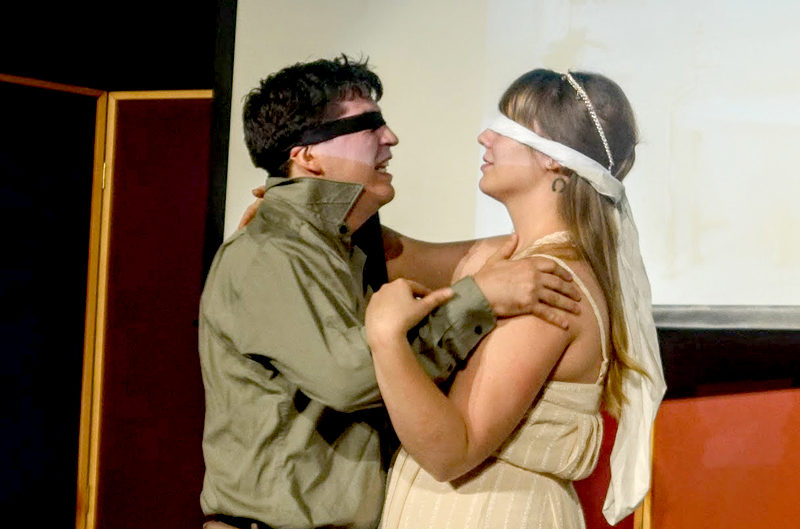 Tyson Bailey and Lainy Catalino in “The Answer” try to stick to the age-old rule, “Don’t see the bride before the wedding.” But they need to talk. (Eleanor Cade Busby photo)

River Company’s production, directed by Mitchell Wellman, is a departure from his usual roles onstage or behind the scenes. Wellman ably directed seven of the nine scenes in the show, while Mallory Adams and Tyson Bailey debuted by directing one vignette each. All scenes were seamless and kept the fast-paced entertainment moving along nicely.

Open auditions were held for the first time in River Company history, opening the doors for new talent to take the stage. It was a good choice in the local theater environment, which has recently seen the demise of many true community-theater groups and the opportunities that come with them.

In the nine scenes that make up the play “Love/Sick,” couples meet, break apart, or learn to love each other more. Many of the premises are not new, yet the jokes here are easy-going and snark-free. It is audience-friendly writing. This is the kind of harmless fun that allows an audience to breathe a sigh of relief. There’s no preaching, no deep lesson, nothing to tax the already-taxed and tired patrons. Escapism? You bet.

One piece, “Uh-Oh,” finds a woman trying to put a spark into her dull marriage. The chemistry and comic timing between Tyson Bailey and Lainy Catalino in this scene and in “The Answer” brought to mind some other two-person plays that the two might consider acting in. The possibility of directing these two able actors in one of these might lure a dusty director out of mothballs to stage it. 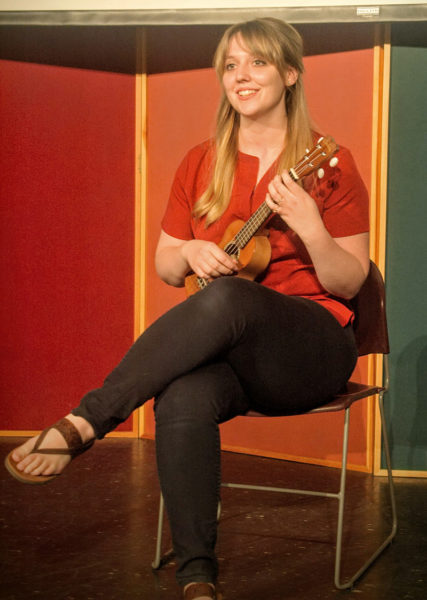 “What?!?” has a man grappling with a stress-related disorder that jeopardizes his love life. William Burleson and Stephen Wallace gave this scene the only really tender moments in the production, gently handling a situation that could be a deal-breaker.

In “Lunch & Dinner,” Mark (played by Stephen Wallace) and Kelly (Christine Andersen) are distracted by their phones. Kelly answers the innocuous question “What did you have for lunch?” honestly and the ensuing conversation about food is a highlight of the evening’s entertainment. Andersen’s deadpan delivery is brilliant.

In “The Singing Telegram,” with Tyson Bailey and Thalia Eddyblouin, a reluctant deliveryman must deliver a message he would rather avoid. Bailey’s expressive reactions offer a wonderful foil to Eddyblouin’s enthusiasm and charm.

Each scene has its charm; each is praiseworthy. Tom Handel and Andrea Handel are back at it in a scene requiring perfect timing, which they provide. As in the first scene, they set the tone and break the ice. No one can break the ice like two Handels.

“Forgot” requires a suspension of disbelief for anyone who knows actress Allison Eddyblouin, who plays Jill opposite Stephen Wallace’s Kevin. Eddyblouin is the last person on earth, in real life, who would “forget” what these two have forgotten, which adds a new layer of hilarity to the scene. When her iPhone reminder, set years earlier, tells her “have baby,” the couple sweetly and sadly notice what they “forgot.”

“Where was I” features Judy McQuillen and Christine Andersen as a couple who have misplaced what brought them together. “Destiny” features a couple (Mike and Beth Rowe) who reconnect after their carts collide at the SuperCenter.

While “Love/Sick” is billed as a “darker cousin” to “Almost, Maine,” there is nothing dark here. Several of these stories may dip their toes into melancholy but the show’s joy is what delighted the audience on opening night.

Perhaps the best review is a spontaneous comment that was made by Jack Larsen, of Boston, as he left the library Friday night: “I needed a break from the world, from the sadness and confusion. This little show was a gift.”