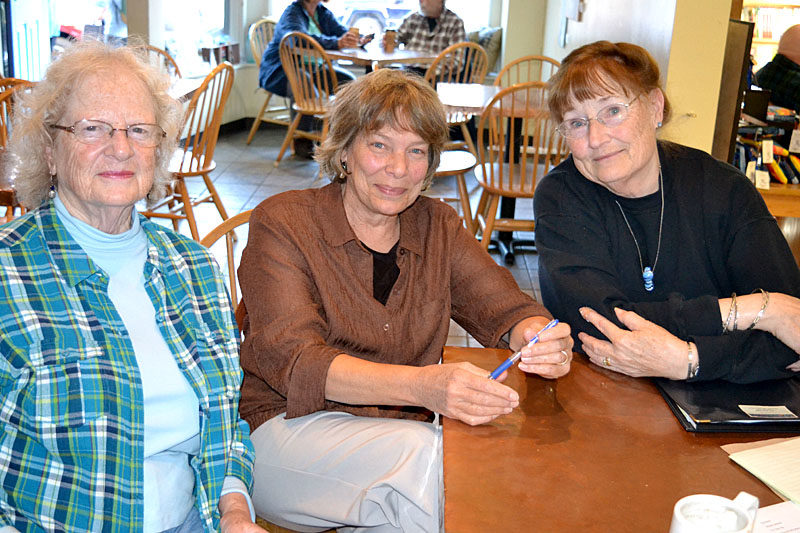 This fall marks the 30th anniversary of the creation of the Miles Memorial Hospital League art committee. To celebrate the occasion, Connie Bright, director of volunteers at LincolnHealth and a longtime member of the art committee, got together with fellow committee members Pemaquid artist Julie Babb and Bristol artist Judy Nixon on a recent sunny fall afternoon at Sherman’s Maine Coast Book Shop cafe. The women chatted about the committee’s history and projects, and their hopes for the work of the 14-member committee down the road, including the annual jurying on Tuesday, Oct. 18 of artwork to be considered for LincolnHealth – Miles Campus’ 2017 series of Hall Gallery art exhibitions.

“The art committee, under the auspices of the Miles Memorial Hospital League, was formed in the fall of 1986,” said Bright. The committee, which originally consisted of six members, “piloted putting art in a gallery area of the main area of Miles Hospital and in waiting rooms,” she said. “After a year, it became such a success, it was decided that this was going to be an ongoing process.”

In 1988, a three-person group from the art committee was designated to begin the process of “putting a print in each patient room … seascapes and tranquil, patient-friendly scenes” purchased from regional art studios, Bright said. Before 1988, there was no art in patient rooms.

The hospital league “was so delighted with our endeavors they matched our funds and we were able to get 10 prints instead of five prints,” Bright said. Additionally, the committee earned money in the form of commissions from exhibited art that was sold, thus aiding in the expansion of the committee’s activities.

“We were able to make decisions as a committee that we would replace prints (in patient rooms) with original artwork,” Bright said. “The artists on the committee were able to call friends and artists in the community to gift their art at a reduced rate.

“That’s what the art committee has been doing all these years,” said Bright, “bringing artwork into the hospital to brighten patient rooms, waiting areas, and public halls. … We have some beautiful works.” Some of those works include a framed quilt made by the late Lou Archer and donated in her honor by Dean Archer, and Damariscotta artist Bertil Whyman’s “Sanctuary,” a large, eye-catching oil painting that hangs prominently in a second-floor hallway of the hospital. Whyman and his wife Amelia donated the painting earlier this year.

The project to fill patient rooms with original art was completed about 10 years ago, said Bright. But the art committee stays busy. In addition to having formal meetings twice a year, and helping exhibiting artists hang and take down their shows, the committee also does an annual inventory of the art throughout the hospital. “We replace frames, mats, and some glass, if it’s broken. We get brass plaques for donations and corporate purchases,” said Babb.

Babb, Nixon, and Bright are excited about the upcoming annual jurying for the rotating Hall Gallery art exhibition. Oct. 18 is the date that all 14 members of the art committee – including Newcastle photographer Chesley Farrell and well-known Damariscotta artist Debra Arter, among others – will consider the submitted artwork of those vying to exhibit at the hospital in 2017.

Interested artists are asked to come to the Arrowsmith Building, on the corner of Belvedere Road and Route 1 in Damariscotta, at 10 a.m. on Oct. 18 with three framed pieces representative of their work, a short biography, and a list of prices for their artwork. No three-dimensional pieces or textiles can be accepted, due to fire regulations. Artists are asked to leave their work for a couple of hours and return to pick it up on the same day. Artists who have shown previously in the Hall Gallery become eligible to show again after a three-year period, but must go through the jurying process to be selected. From 20-25 pieces are needed to fill the space for each six- to eight-week show, and all pieces must be for sale.

The artwork must also be of a calming nature. “Things need to be lovely,” Babb said. “We discourage political, controversial pieces. Be mindful that it’s a hospital.” 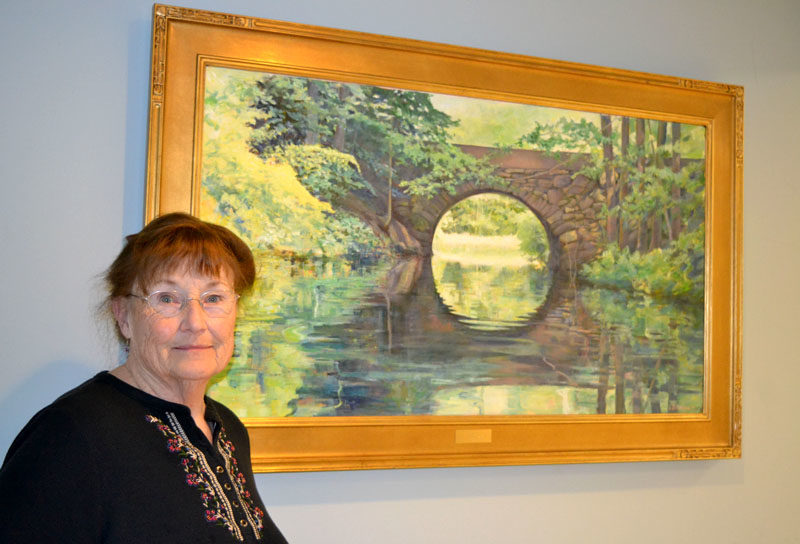 Both established artists and those in the early stages of an art career are encouraged to submit works, such as “some of the younger artists that are moving into the area that may not know the avenues of where to show,” Bright said.

Two-person shows are also a possibility. “In other words, you can split a show if you don’t have enough stuff” to fill out a 20- to 25-piece show, Babb said.

“It’s a great venue to get started,” said Bright.

“It’s a good service for the community,” said Nixon of the rotating Hall Gallery exhibit. “And it’s enjoyable to me – meeting new artists and helping with the hanging.”

“I like hearing people oohing and aahing during the hanging,” Bright said. “It is a gift from the artist to the community and the patients, something to look at when you are pacing up and down the hall.”

In light of the fact that LincolnHealth’s proposed new 2 1/2-story outpatient center is on the horizon, to be built on the Miles Campus between the hospital and Schooner Cove, will the art committee expand its decorative reach into that building, too?

“At the moment, we have not discussed any plans for the expansion of the health center,” said Babb, adding, “I’d like to think that the art committee would, at some point in time, have a function there.”

Contact Babb at 677-3458 or jbabb@tidewater.net for more information about the Oct. 18 jurying event.