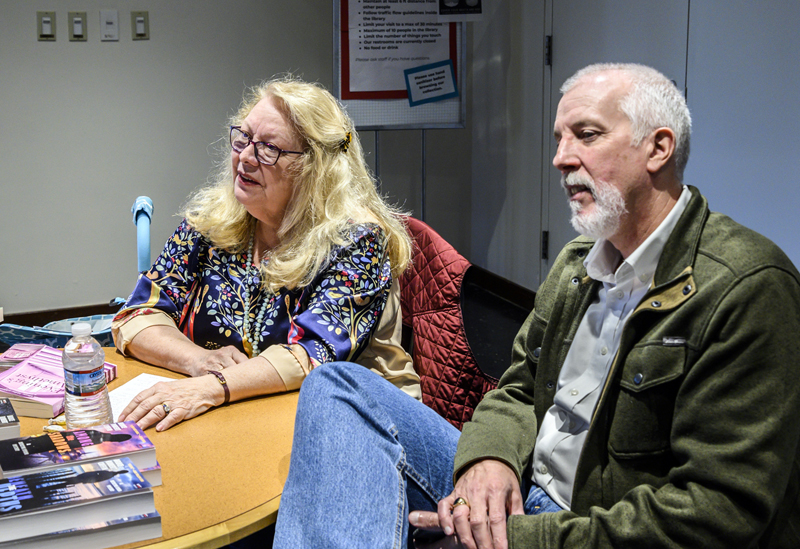 Mystery writers Marni Graff and Bruce Robert Coffin take questions during an author appearance at Skidompha Library in Damariscotta on May 4. When asked what order to read their series, Coffin said he built a character arc over the course of the books, but the writing gets better as they go. (Bisi Cameron Yee photo)

Two award-winning mystery authors convened for a conversation at the Charles Talbot Porter Meeting Hall at Skidompha Library in Damariscotta on May 4.

That conversation between Marni Graff, author of the Nora Tierney English Mysteries and the Trudy Genova Manhattan Mysteries, and Bruce Robert Coffin, author of the Portland-based Detective Byron mysteries marked the return of literature programming at the library after a more than two-year absence.

“I’m the one with the prepared list of questions,” Graff said to get things started. She asked Coffin, whose work has been praised by writer Joseph Wambaugh as “authentic and gripping,” to talk about his background in police work.

Coffin worked in law enforcement for 28 years and knew he wanted to tell a story that could only be told by someone with that specific experience.

“Allowing the emotion you feel on the job to bleed onto the page is the hardest thing,” he said. Coffin struggled with showing vulnerability in his writing until a mentor gave him the permission he needed to write his character as flawed. “And it was like a switch flipped,” he said.

Authenticity is a hallmark of Coffin’s series. “In real life if you’re a good detective, everything else takes a backseat to the job. Except for the victim and the victim’s families,” he said. “Being a police officer can be hard on a marriage, hard on a family.”

Coffin enjoys unearthing the history of Maine – his protagonist is a second-generation cop, which allows Coffin to showcase 40 years of Portland’s history. Coffin said the city burned down three times but “there are still pieces that stick up here and there. Diamonds from the past.”

Graff’s Nora Tierney series is a combination of police procedural and cozy mystery and Coffin said her work is “proof positive that cozies can be dark.”

Graff’s protagonist is a former journalist with an urge to find the truth, to suss out the story behind the crime. In doing so she butts up against police procedures which have stricter requirements: justification, a more structured approach.

“I just thought that dichotomy would make for good reading,” Graff said.

Graff looks for a contact, a working detective willing to answer questions about police procedures in each city she writes about.  Insider knowledge is valuable. “It adds a layer of reality to the books that I think people appreciate,” she said.

“Openings are the part I rewrite the most. I’ve grown to be okay with that,” Graff said, calling the opening scene critical. “It sets the tone for the rest of the novel.”

“The opening scene of the first book sets the tone for the series,” Coffin said. Coffin said he wrote and rewrote his first opening scene until he got a note back from his editor that it felt overwritten. One more rewrite, using the least amount of words possible, finally nailed it.

After eight false starts, Coffin is currently at work on a standalone thriller written this time from a female perspective. He said he is “trying to channel his inner Beth Dutton,” after finding inspiration in the “Yellowstone” character for his newest protagonist, a demoted Homeland Security agent forced to babysit the Portland bus station with its connections to Boston Logan International Airport.

Coffin said he’s not afraid to write a strong female character: “I’ve had strong women around me my whole life.”

Graff is working on alternating series. She starts each mystery with “who did it and why” and then creates a character bible that delves into their childhood. “To know the character you have to do that,” she said.

Coffin’s process is less rigid. “I think you always allow for happenstance,” he said. “An overarching idea will come to me and I’ll think “man I can write a story around that.”

Graff keeps a folder for the next book where she collects snatches of conversation overheard while dining out, ideas and thoughts that she’ll toss into it for the future.

Coffin said he used one overheard conversation verbatim, typing it on his iPad as two strangers at the next table spoke. “You never know when there’s a writer listening,” he said.

Graff was a nurse for 30 years, writing poetry and screenplays on the side. She decided to write crime novels when she retired, because they’re what she read the most and she knew the conventions of the genre.

Graff was mentored by one of the great mystery authors, P.D. James, who, according to Graff, used to handwrite an entire outline in bullet points on yellow legal pads at her kitchen table and never had writer’s block. “Once you have that outline, you can see what trouble the character can get into,” Graff said.

“Every one of us started as a fan,” Coffin said of authors. He wanted to be the next Stephen King, even standing in line to meet him. “You feel you have a connection with the writer,” he said.

Graff said readers are drawn to mysteries because they are a puzzle being solved. “There’s a sense of control, of justice being served.”

“Even more so in times of chaos,” Coffin said. “In real life, there’s a cost but in the books justice can win. It’s a way of setting the world right.”

“I think people like the idea that something unsolved can still be solved,” Graff said of cold cases, one of which is the catalyst for “The Evening’s Amethyst,” her newest book. “And that these people haven’t been forgotten.”

“It’s justice, even if it’s meted out later,” Coffin said. “In cold case stories, readers are rooting for the victim more than the good guy … because they want the closure.”

When asked what order to read their series, Graff and Coffin agreed that the best book is the most recent, but to get the most out of the books read the series in order.

Graff is from Belhaven, N.C., but she likes to end her book tours in Maine with a visit to Skidompha where her son Matthew is the executive director. She met Coffin at a mystery writers’ convention and when she learned he was from Maine, the two became fast friends.

Coffin and Marni Graff have visited Skidompha together before – they were featured speakers in a Chats with Champions event in October 2019, before COVID-19 came to Maine.

Chats with Champions is a volunteer-driven program that brings people from an array of backgrounds – arts, science, literature, government – to speak to audiences in Lincoln County. Skidompha Executive Director Matthew Graff called it “a crown jewel” of the library’s programming.

“It felt wonderful, a little weird … like reawakening old muscles,” Matthew Graff said of this first foray back into event programming. He was energized by the attendance and looks forward to the momentum continuing.

While Skidompha has strong programs to promote youth and teen literacy, Matthew Graff said he is gratified to see adults included again.

“It’s a frequent thought that libraries are on the way out,” Matthew Graff said in a May 17 phone interview, noting the trend toward technology, the reliance on computers and Google. But the engaged audience, the insightful conversation, the give and take between writers and readers evident as Coffin and Marni Graff explored and explained their process proves that, as Matthew Graff said, “Nothing could be further from the truth.”

Skidompha Library has a full slate of programming planned for the upcoming summer season including regular online meditation and poetry groups, genealogy events to research and share stories about seafaring and naval/military ancestors, the Oceans of Possibility adult summer reading program, and a wide variety of special programming around local art, music, history, science, and nature.

For more information go to skidompha.org.