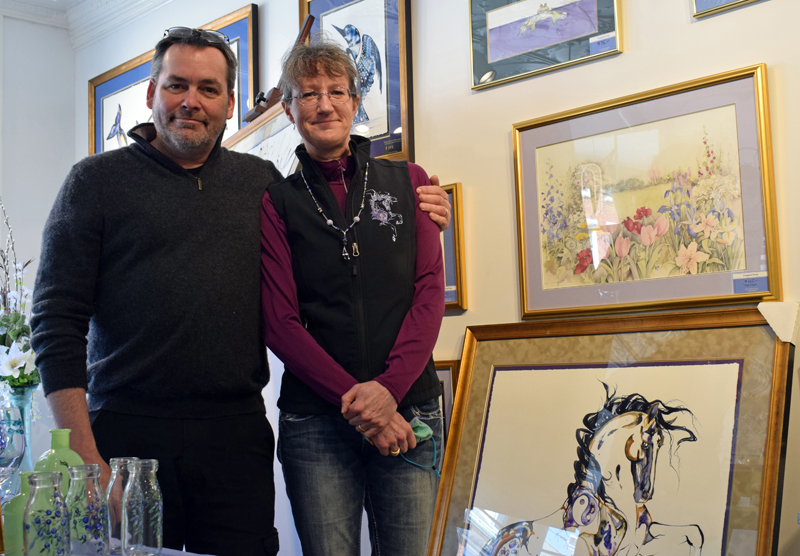 Todd and Sarah Richards stand in the new Sarah Richards Gallery in Damariscotta on Saturday, April 3. On the right is a floral watercolor by Sarah’s late mother, Lyn Snow, above one of Sarah’s horse watercolors. (Evan Houk photo)

The Sarah Richards Gallery is in the Damariscotta Center building, at 157 Main St., where a storefront window is packed with colorful and realistic paintings that jump right out onto the street.

In addition to original watercolors and reproductions by Sarah and her late mother, Lyn Snow, the gallery also offers hand-painted glassware, printed coffee mugs, vases, and containers, as well as clothing with Sarah’s artwork on it. 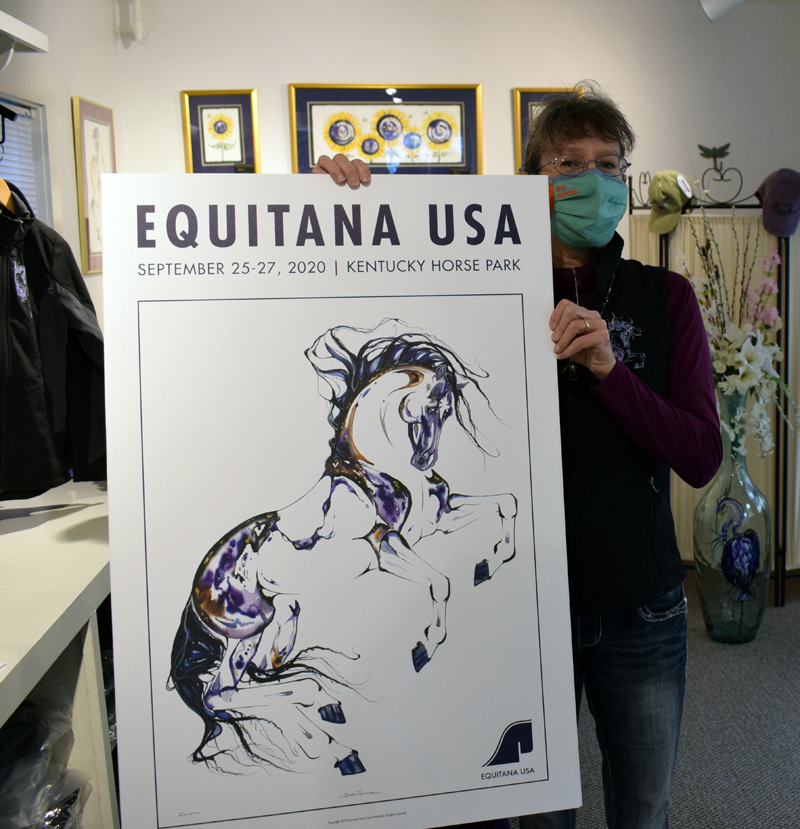 Sarah Richards displays the poster she designed for Equitana USA, a horse show that was set to take place in Kentucky last September. A poster is included with each purchase at Richards’ new gallery in Damariscotta. (Evan Houk photo)

Much of Sarah’s art depicts horses. For 23 years, she and her husband, Todd Richards, who manages her art business, have showcased her art at high-profile horse shows around the world.

Sarah is known for her accuracy and attention to detail in her horse paintings.

Todd, during an interview at the gallery on Saturday, April 3, said that horse enthusiasts laud Sarah’s work for its “confirmation,” which is a mark of accuracy in the depiction of the horse.

“She’s incredibly respected in the equine industry. I’ve seen dozens of people cry and shake when they meet her at festivals,” Todd said. 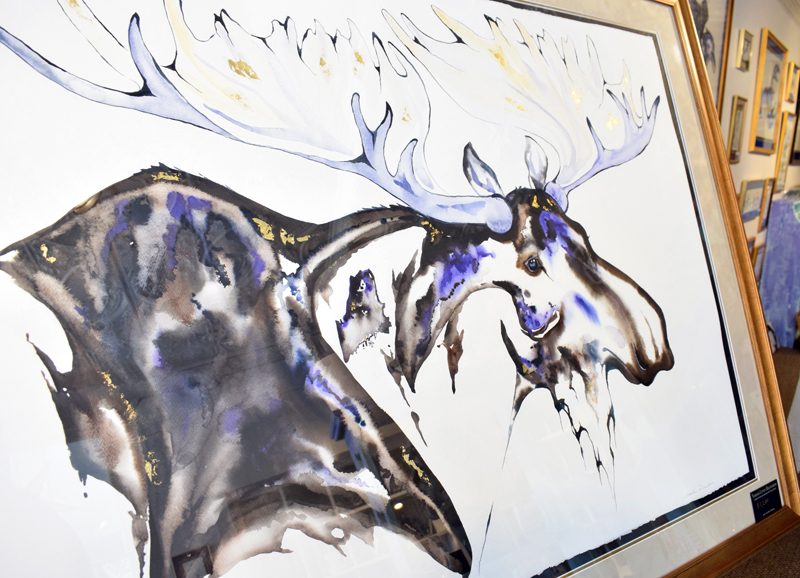 A watercolor painting of a moose by Sarah Richards is displayed in her new gallery in Damariscotta on Saturday, April 3. (Evan Houk photo)

Sarah has been drawing horses ever since her second-grade math glass, where she would doodle images of horses in the margins of her math book.

She has been riding horses and painting watercolors since she was young, when she learned how to paint from her mother, Lyn.

Lyn was well respected for her watercolors in the area, Sarah said. After she passed away a few years ago, Sarah acquired a lot of her work, which is now available at the Sarah Richards Gallery. 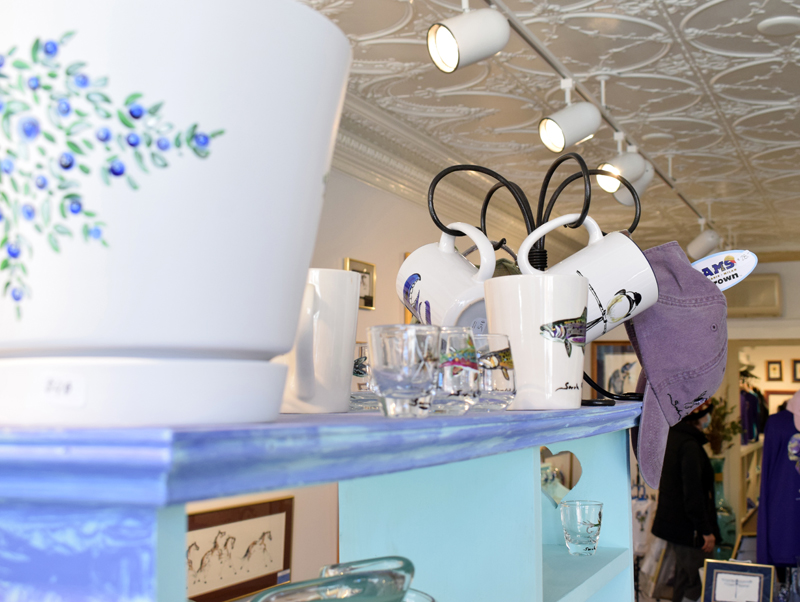 In some of her paintings, Sarah even includes a snippet of a Lyn watercolor inside her own. For example, a painting of a lobster has one of Snow’s blueberry watercolors inside the lobster, a remarkable mash-up.

“We had a lot in common that comes out in the artwork — gardening, riding,” Sarah said of her mother.

Sarah and her mother operated a gallery in Rockland for about 10 years before Sarah and Todd began traveling to art shows.

Eventually, they both realized Sarah’s unique talent for painting horses.

“It was obvious that the equine stuff was her true gift, so we slowly gravitated away from the art shows to horse shows,” Todd said.

Sarah said that the horse show most Americans would be familiar with is the one that takes place at the Kentucky Derby, but there are a multitude of horse expos and competitions around the globe that are even bigger. 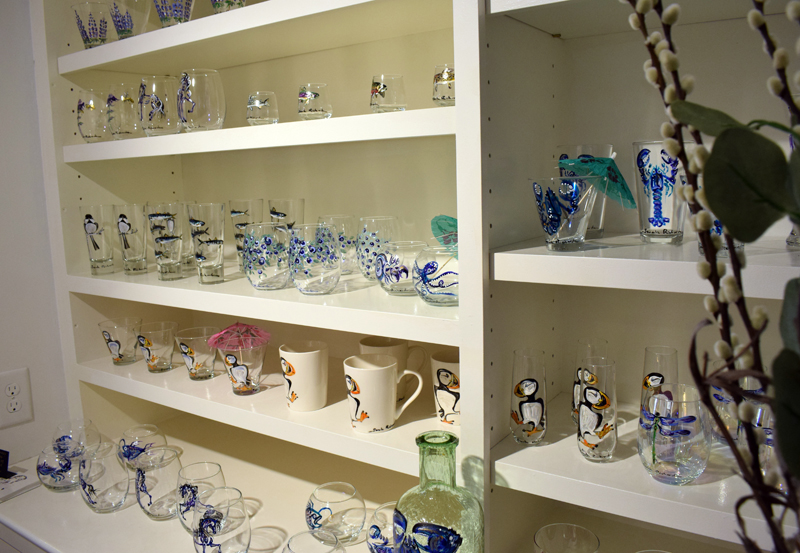 An array of hand-painted glassware is displayed at the new Sarah Richards Gallery in Damariscotta on Saturday, April 3. (Evan Houk photo)

Last year, Sarah was commissioned to design the poster for a large horse show in Kentucky that was set to take place in September — Equitana USA.

But because of COVID-19, Sarah and Todd’s art business ground to a halt in March 2020, when Equitana USA and all the other shows they had booked were canceled.

“We sort of muddled through the last year like everybody else,” she said.

When a space opened up in the Damariscotta Center building, Sarah and Todd saw an opportunity to set up their own shop in town.

“It dovetailed into what we were hoping to do someday. It just came a lot faster than we realized,” Todd said of the gallery.

Sarah has shifted her work from mostly horses to several different types of Maine wildlife for the gallery. The gallery has paintings of lobsters, puffins, chickadees, porpoises, and a moose on display.

“If I’m not painting, I’m doing something outside, either running or riding my horse,” Sarah said. 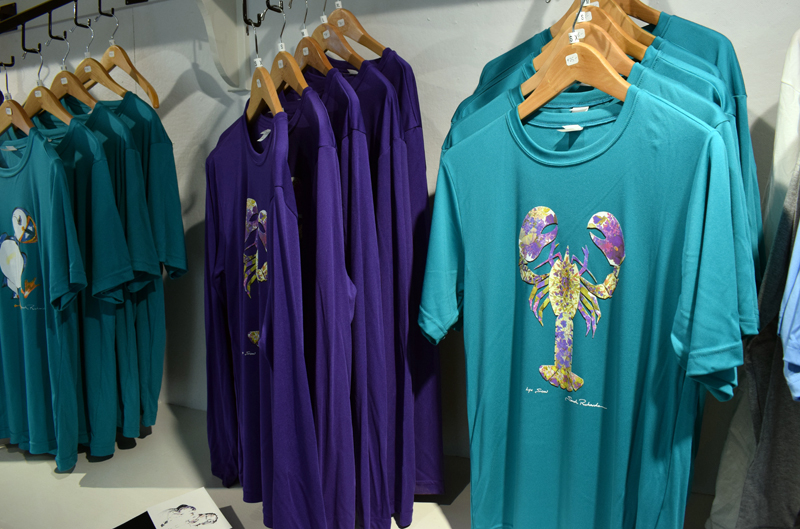 The new Sarah Richards Gallery in Damariscotta sells apparel with Richards’ work printed on it. The gallery is open from 10 a.m. to 5 p.m. Tuesday-Saturday. (Evan Houk photo)

She said her “happy, happy place” is coaching track and cross-country for students in grades five through eight at Great Salt Bay Community School in Damariscotta, which she has done for the last nine years.

Sarah’s family is originally from Maine, but moved to Northern California when she was young. She summered in Maine before she and her family eventually settled back in the state.

She and her husband Todd have lived in Bristol for the past 20 years, where she has a home studio.

“I’ve had a lot of support from my family,” Sarah said.

The Sarah Richards Gallery has seen a steady stream of traffic since opening Thursday, Sarah and Todd noted.

The gallery is open from 10 a.m. to 5 p.m. Tuesday-Saturday. For more information, visit sarahlynnrichards.com.