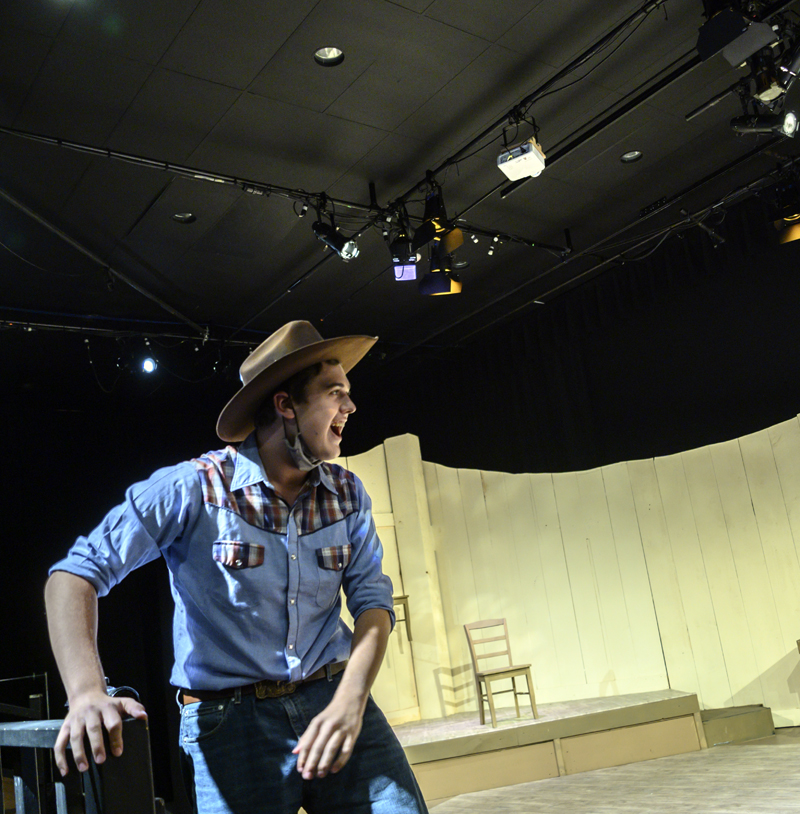 Harrison Pierpan as Curly takes the stage during a dress rehearsal for Heartwood’s production of Oklahoma at the Poe Theater in Newcastle on Oct. 30. (Bisi Cameron Yee photo)

Heartwood Regional Theater’s student production of “Oklahoma” is a blend of the classic Rodgers and Hammerstein musical and the more somber 2019 Broadway revival conceived by Tony award-winning director Daniel Fish.

“Oklahoma” marks the return of Heartwood’s focus on student productions after a COVID-enforced hiatus of two years.

Artistic Director Griff Braley said that because of that pause there are kids who graduated without having the chance to perform in a musical. But almost 30 student performers will be taking the stage for seven performances starting Nov. 4.

Heartwood’s “Oklahoma” preserves the rousing numbers, humorous dialogue, and the fundamental love story of the original musical. But it also reflects on the inherent conflicts and violence that existed just below the surface in the familiar theater production and in the beloved 1956 movie version.

Braley navigated between those iterations of “Oklahoma,” making adjustments as needed to ensure the musical would work as a student production. The result is a more stripped down version. Less nostalgic, more thought provoking.

According to Braley, when “Oklahoma” premiered in 1943, it was near the end of the jazz and vaudeville approach to musical theater. “Oklahoma” was the first musical to open with a single voice.

“They were imagining a new type of theater,” Braley said. “It has these horrible things that happen in it that you just miss when you watch the regular musical.”

Choreographer Michelle Bruckner said, “You almost get blinded by the big dance numbers.”

According to Bruckner, “Rodgers and Hammerstein made a lot of commentary about American society as it was at the time. They commented on racism, societal relationships, and hetero-normative behaviors in terms of how men and women interact.”

“It’s a tough musical in shape and form. It’s got some dissonance in it,” Braley added.

Braley chose “Oklahoma” for the cast size and the spacing on stage. COVID is still a consideration – the production needed to work for the requirements of the school and the safety of the young performers.

Kids can’t have contact right now, so kissing scenes became more challenging. Braley used a running gag to make those intimate scenes “stagey,” and steered some of the more serious scenes away from kissing altogether.

Performers are unmasked but only on the stage, and blocking for the production focused on maintaining distance and minimizing face to face time as much as possible.

Masks are required for audience members.

Heartwood had less than a week’s notice when its last student performance was canceled in March 2020 due to COVID, so Braley knew he needed “Oklahoma” to hold until spring 2022 if necessary.

“Until people are sitting here and the lights come up, we have learned not to count our chickens,” Bruckner said.

“Oklahoma” starts the process of rebuilding Heartwood’s student program from where it left off two years ago with 66 kids involved in “Man of La Mancha.”

Braley’s expectation is that every show be a training ground to get that group of kids to the next level, but “the program’s not moving the way it normally would from year to year,” he said.

And very few kids in the current production have any historical memory of performance to build on.

Bruckner, who performed on Broadway and now teaches at the American Musical and Dramatic Academy in New York, built the dance numbers for “Oklahoma” from scratch.

Bruckner’s high school ballet teacher was in the movie version of “Oklahoma” and Bruckner actually met original choreographer Agnes DeMille while she was a senior in college.

But while there are a “couple nods I snuck in there… a little wink, a little head bow,” Bruckner said her take on the dance performance is very specifically not a DeMille reproduction.

DeMille choreographed a seminal dance solo for the original production that was over 13 minutes long, but Bruckner cut it down to four-and-a-half minutes of evocative movement that makes the almost empty stage a canvas for the emotional heart of the story.

Rehearsals are recorded and uploaded so Braley and Bruckner can observe and take notes and so that the kids can review and critique their own performances. Bruckner said she watched Cumming’s dance rehearsals via Zoom.

This production differed from previous years for its particularly challenging timeline. Casting typically happens in the spring and performers practice vocals through the summer. But this year auditions were in late August and casting took place in the first week of school.

The students had only a couple of months to learn the music. And there were a lot of first timers. But after more than 30 rehearsals, they all had the music, dialogue, and mannerisms down.

Harrison Pierpan as Curly moves from amiable to menacing with ease as he woos Laurey and subtly threatens Jud.

Sophia Scott plays Laurey with the right mix of confidence and naiveté in her first lead role. And Ben Schwink as Jud Fry inhabits a character both frightening and tragic.

The more amusing love triangle between Alicia Flis as Ado Annie, Mitchell Straus as Will Parker, and Benno Hennig as peddler Ali Hakim act more broadly, playing up the   humor, and helping hold the tension at bay.

Rebecca Tomasello is strong and feisty as Aunt Eller, perhaps more in control than the character is often portrayed.

“They’ve worked hard,” Braley said. “I think they’ve got a show on their hands.”