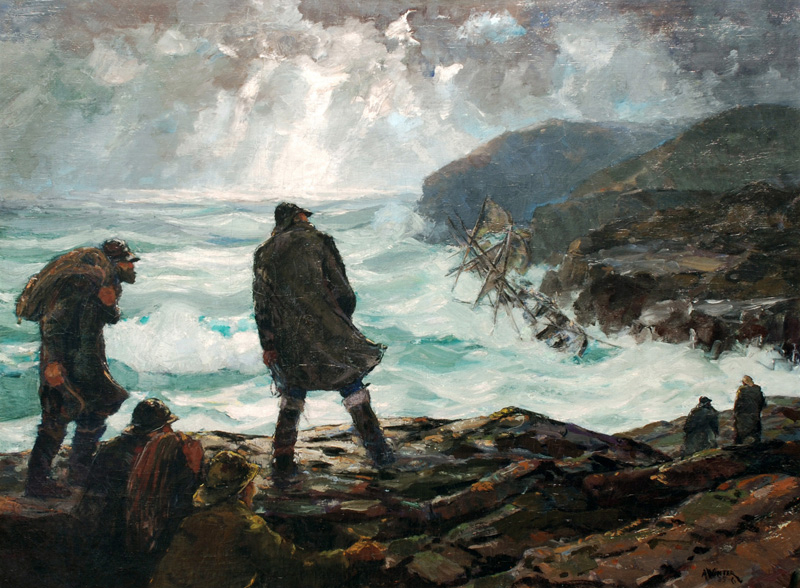 Andrew Winter’s Morning After the Storm”

“Art in the Twentieth Century” opens at the Wiscasset Bay Gallery in Wiscasset on Saturday, July 8 and will continue through Friday, Aug. 4. The exhibition explores the pluralistic nature of the art world in the 20th century, with developing styles that include cubism, expressionism, realism, and abstraction.

Of particular note is a work by late German-American artist George Grosz executed in New York in 1936. Grosz was born in Berlin in 1893. He became an important member of the Dada movement and openly rejected the rising German nationalism during the second decade of the 1900s. The Dadaists sought to escape the rationalism and logic that they believed led to World War I. Bringing an experimental, playful, and even irrational approach to art, Grosz and the Dadaists sought a return to humans’ child-like nature.

After Grosz emigrated with his family to New York in 1933 because of his strong anti-Nazi sentiments, he became a teacher at The Art Students League of New York. A few years later, Grosz painted “New York Skyline” in his loose, ethereal style with calligraphic marks accenting the tugboat and Manhattan skyline.

Contrasting Grosz’s abstracted, spirited work is Andrew Winter’s “Morning After the Storm.” Rooted in a clear, realistic style and drawing on a dramatic event, the artist depicts four sailors on a cliff viewing the remains of their ship off the coast of Monhegan Island. Other significant 20th century paintings and sculpture include a large modernist oil, “Woolwich Ferry Slip,” by John Folinsbee, and a major bronze by William Zorach, of his daughter Dahlov Ipcar, titled “Innocence.”

Wiscasset Bay Gallery is located at 67 Main St. in Wiscasset. For further information, call 882-7682 or go to wiscassetbaygallery.com. The gallery is open daily from 10 a.m. to 6 p.m.