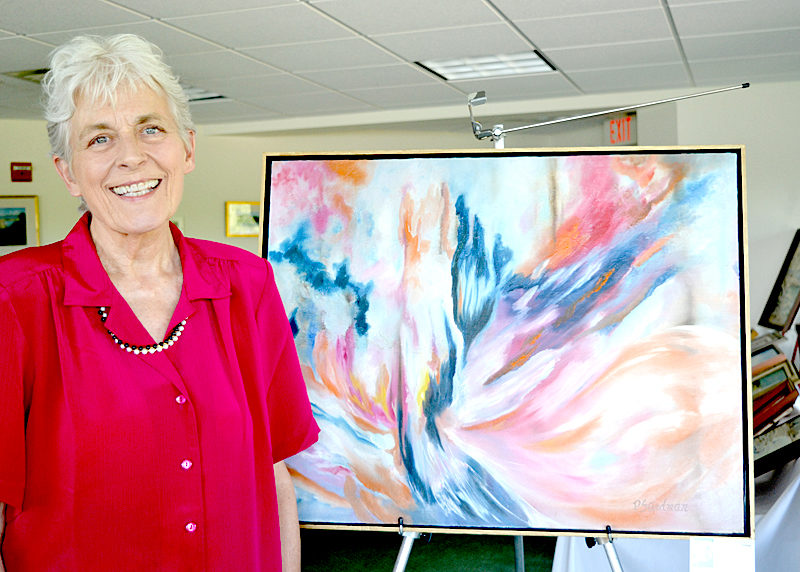 Damariscotta artist Polly Steadman stands beside her “wet-on-wet” oil painting “Phoenix” at her recent retrospective show at The Lincoln Home in Newcastle during the Twin Villages ArtWalk. (Christine LaPado-Breglia photo)

For one evening only – Friday, July 15 – The Lincoln Home in Newcastle played host to a 46-year retrospective of the colorful paintings of Damariscotta artist Polly Steadman. The occasion was the second Damariscotta-Newcastle ArtWalk of the year and Steadman was on hand at the event to mingle with Lincoln Home residents and other ArtWalk attendees snacking on hors d’oeuvres, sipping wine, and asking questions about her artistic process.

Steadman, as those who spoke with her likely discovered, began her career creating realistic landscape and seascape paintings – a far cry from the dreamy abstracts she is now known for. A little less than half of the paintings in this retrospective show were from that pre-abstract period, which ended more than two decades ago, when Steadman discovered the joy and freedom of “wet-on-wet” painting.

The wet-on-wet oil-painting process involves painting wet paint onto wet paint, unlike Steadman’s previous technique, which required drying time for applied paints before others could be added – a process that took much longer than her current “one-session” method.

“Trevett circa 1970,” a small landscape painting featuring the post office in the village of Trevett, is from Steadman’s realism period. It was displayed on a table along with other early pieces, such as “Gateway,” of a white church in the snow, and the self-explanatory “Farm View.” “Trevett circa 1970” is the first painting she ever produced.

“I don’t like it,” she said of the skillful painting.

“This is my favorite,” she said, beaming.

“There’s such joy in Polly when she talks about her new technique,” said Grace Goldberg, owner of Savory Maine Dining & Provisions in Damariscotta. Goldberg, who has long been familiar with Steadman’s wet-on-wet abstracts, was at the ArtWalk show “to see her older stuff,” she said.

Steadman’s abstracts, which make up the majority of her ArtWalk show, draw in the viewer with their dream-like swirls and strokes of color. One sometimes perceives intriguing impressions of the waves, skies, and flowers from her realism period; her abstracts often evoke the natural world. Some pieces feature moons located on barely perceptible horizons in a field of variegated color. Others are gentle explosions of color, almost primeval, big-bang-like.

“Passion Fruit” – in purple, red, yellow, and white – evokes a flower, a candle, even female sexuality – all at once.

The roiling blues and greens of “Seabright” give one the feeling of being on the ocean without it being a realistic representation of the ocean. In fact, it is the intuitive, abstract nature of Steadman’s art that lends it a feeling of movement that does not seem to occur with traditional seascape paintings. Ditto for “Water,” an inviting piece that evokes both water and the Northern Lights, with its yellow, pink, light blue, and green colors hovering in the top half of the painting.

“Deja Vu,” another painting selected by Steadman to be displayed on an easel rather than the long tables that held most of her artwork, is intriguing. The large piece features dark and light blues placed on the canvas to seemingly suggest water and sky. Two tiny, very blurred figures offer the barest hint of being sailboats; from them extend long, wavy, barely perceptible “reflections” that almost blend into their surroundings.

The painting epitomizes Steadman’s commendable ability – evident in all of her wet-on-wet paintings – to evoke comforting hints of realistic images with her imaginative, surrealistic abstract approach.

Waldoboro painter Pamela Hansen will be the featured artist at The Lincoln Home’s next ArtWalk event, which will take place from 4-7 p.m., Friday, Aug. 19.

The Lincoln Home is located at 22 River Road, Newcastle, and is stop No. 1 on the Twin Villages ArtWalk map.