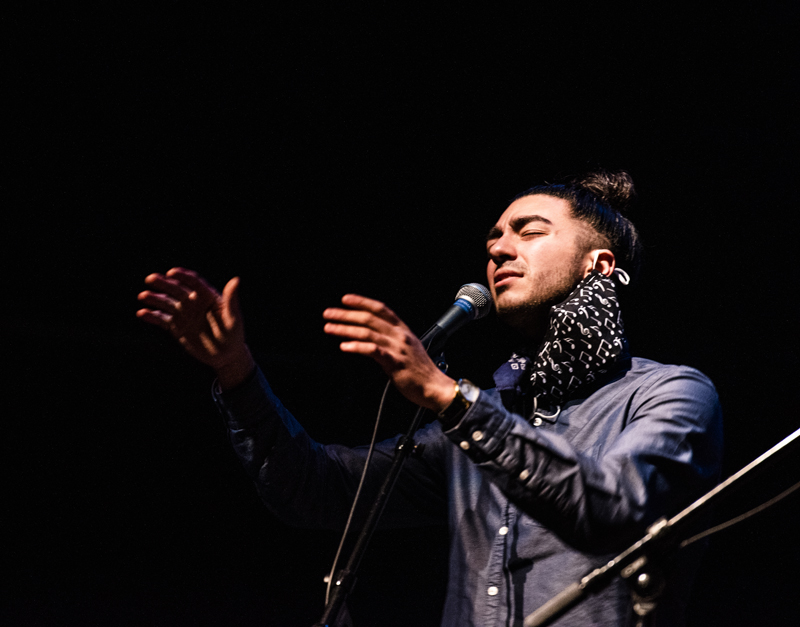 Sean Oshima sings during rehearsal at the Waldo Theatre in Waldoboro on Thursday, Dec. 3. The historic venue hopes to raise $20,000 by the end of the year in order to win a matching grant from an anonymous donor. (Bisi Cameron Yee photo)

The Oshima Brothers “grew up at the end of a very long dirt road in Whitefield in a house with many, many instruments and not so many neighbors. Childhood was running around in the woods and getting lost in music,” Sean Oshima said. Younger brother Jamie “started banging on a full drum kit at the age of 4 — every parent’s nightmare,” before picking up guitar when he was 7 or 8. “Music never felt forced,” Sean said, “it was always happy.”

Their Dec. 3 concert at the Waldo Theatre was a homecoming of sorts, as they returned to Lincoln County to support the renovation of the theater.  “The performance has been many days, months, years, a long time coming,” Sean said. “We always loved the Waldo from afar and have been cheering them on.”

The duo even performed in two fundraising concerts for the Waldoboro institution, one in the summer of 2018 and one at the Lincoln Theater with the Adam Ezra Group in 2019. But Dec. 3 was the first time they have actually taken the historic stage.

While there was no audience in the velvet seats of the Waldo Theatre, the performance was seen virtually by fans in 15 states. “I’m so pleased for them,” said Kate Fletcher, executive director of the Waldo, “so glad they got to have the kind of concert on stage that they know and love, and that they got to be seen and heard.” 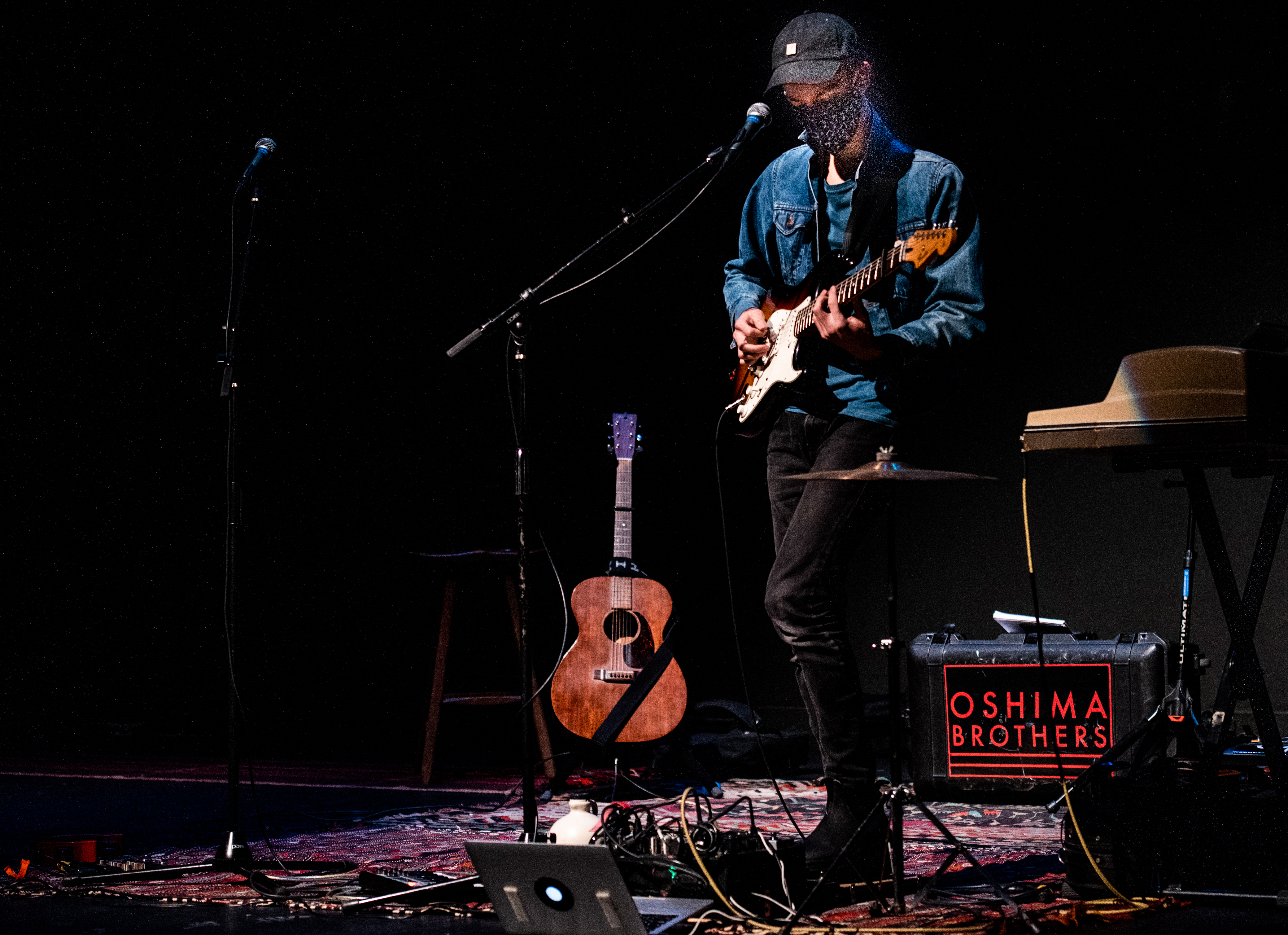 Jamie Oshima plays guitar during a sound check at the Waldo Theatre in Waldoboro on Thursday, Dec. 3. Jamie produces and audio engineers all the band’s music. (Bisi Cameron Yee photo)

Fletcher began talking to the Oshima Brothers about performing at the venue in the fall of 2019. In those pre-pandemic days, the young singers were already touring nationally, and booking them was challenging.

“They are such good musicians, such good showmen, so connected to the Midcoast but with a national following,” Fletcher said. “I knew they would be a great early concert for us, especially after their fundraising efforts on the Waldo’s behalf.”

Sean Oshima, a gifted poet, writes most of the songs and says their music “feels very rooted in Maine.” Metaphors he uses “can be traced to the landscape — the coastline, the mountains, and the seasons.” He draws inspiration in broad brushstrokes from places they know around the state.

The lyrics of 2019’s “Nine Mile Kite” include the lines, “I called you to tell you / That it’s raining in Whitefield … And I wanted to find you / Before the memories fade / I’ve checked all the back roads / And I’ve looked by the ocean / But you’re always in motion / And you never come home.”

Their music is described as folk pop or Americana and Sean described their sound as “roots-based pop that is from the heart and hopefully full of joy.” But he went on to say, “I think that genre is so fluid — I like when listeners decide for themselves what our music is.” 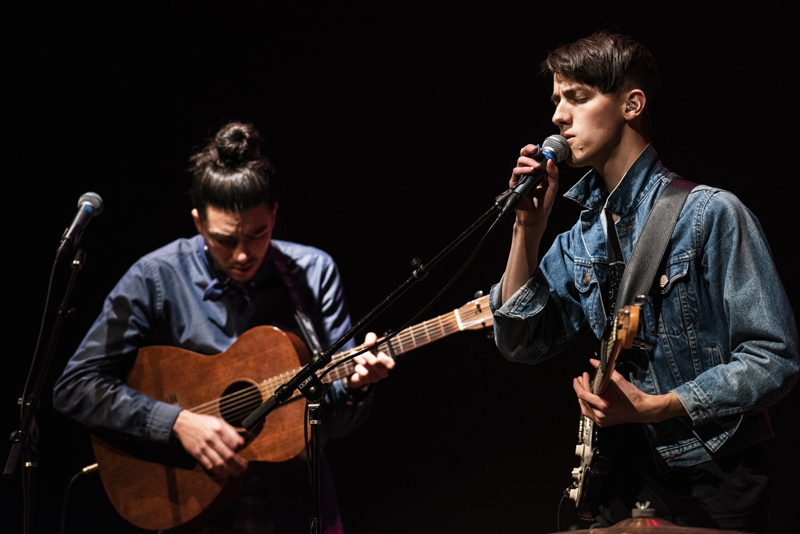 Brothers Jamie (right) and Sean Oshima perform during a livestream concert from the Waldo Theatre in Waldoboro on Thursday, Dec. 3. A portion of the proceeds from the concert will help fund the Waldo’s restoration. (Bisi Cameron Yee photo)

“For a very long time we have settled into and love playing together,” Sean said. But their music often feels bigger than the two of them. With their impressive musicality and the aid of Jamie’s computer, they are able to build layers of sound. Jamie plays drums with his feet, plays guitar and fiddle, and sings. Sean sings and plays guitar as well. Both play keyboards. “Together we try to make as much sound as possible,” Sean said.

Jamie conceives and produces all their videos. “Video is the last moment to be creative, to interpret what Sean has written. It’s one more extension of the song,” he said. He is self-taught, still learning the craft of production, but his work feels polished and intuitive.

“All the videos come from Jamie’s own brain and vision,” Sean said.

“I learn something new every time,” Jamie said. “I really didn’t know a lot — I just dove in.”

The Oshima Brothers have played a handful of live shows with very small audiences, but most of their concerts these days are livestreamed from their home. “Being a musician in the midst of a pandemic is very challenging. We had to adapt,” Sean said. The brothers lost over 30 concerts and a majority of their touring season in 2020, but there have been positives. 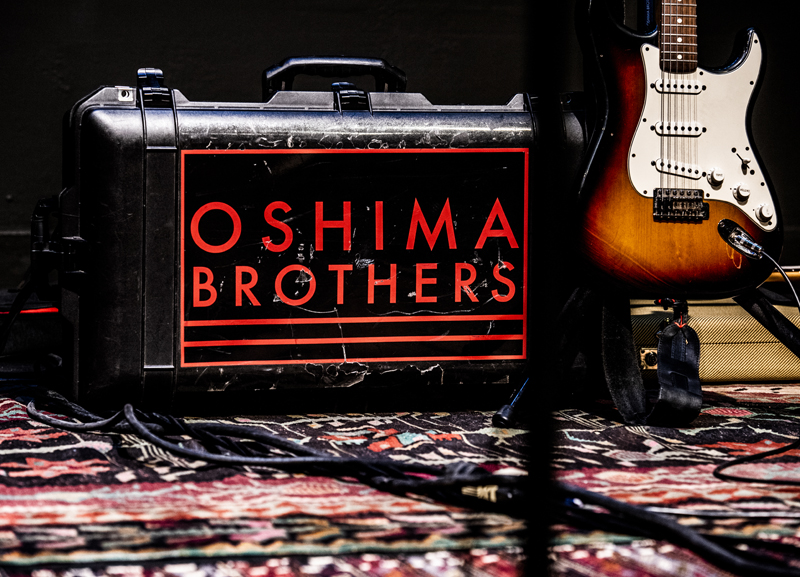 “There are so many things you can’t bring on tour — you can be more creative at home,” Jamie said. “On tour you can’t spend all day setting up your living room with the most intricate, wild lighting.”

The Oshimas believe that, now that livestreaming has been introduced as an option, it’s here to stay. And they find it a fun alternative to traditional concerts. Sean enjoys tuning in to friends making music all over the world, and reaching fans scattered across the country. “But I’m excited to be back on a stage, to hear applause,” he said.

Fletcher, too, believes livestreaming is here to stay. As workers wired the theater for sound and projection over the last summer, they also wired it for streaming. Fletcher talked to the board in August: “This is the future. Everything has changed. No matter what happens, the world has changed in terms of how people receive their content.” The board agreed. 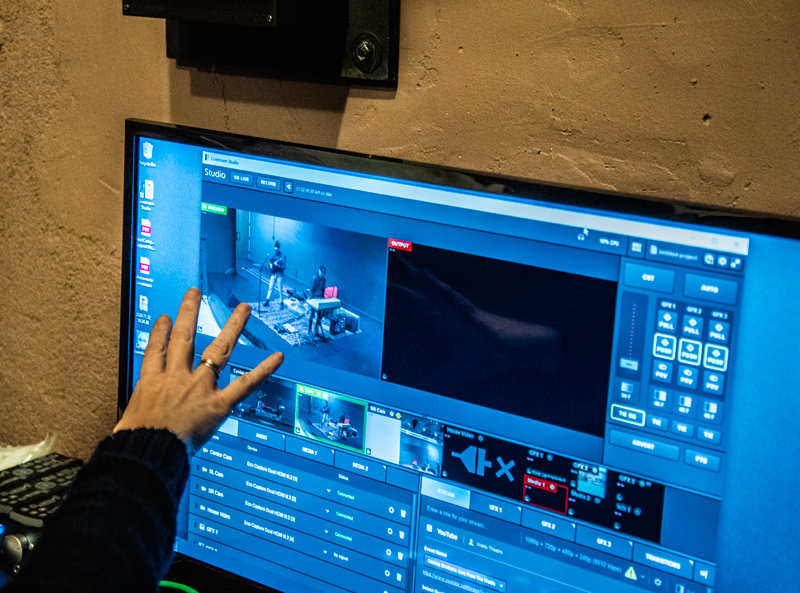 Kate Fletcher demonstrates the livestreaming system in the projection room at the Waldo Theatre in Waldoboro on Thursday, Dec. 3. The system has the ability to smoothly transition between three cameras that cover the extent of the stage. (Bisi Cameron Yee photo)

The prospects are exciting. “This will be part of what we do,” Fletcher said, listing possibilities that include educational programs, TED-style talks, touring theater groups, even candidates forums — “now and years into the future.”

“Even when 250 people are in the audience, grandparents can watch their grandkids in school plays, people who grew up with the Waldo can visit it virtually, seasonal residents can tune in and support the theater and the performers,” Fletcher said.

Difficult times have brought necessary changes to the theater, followed by new possibilities. The Waldo will be able to reach a larger audience than it ever envisioned just as so many performers are seeing their venues disappear.

“People see the renovation as a sign of hope,” Fletcher said, citing letters she has received from donors around the country. “We are grateful that the restoration of the Waldo has become synonymous with a bright future.” 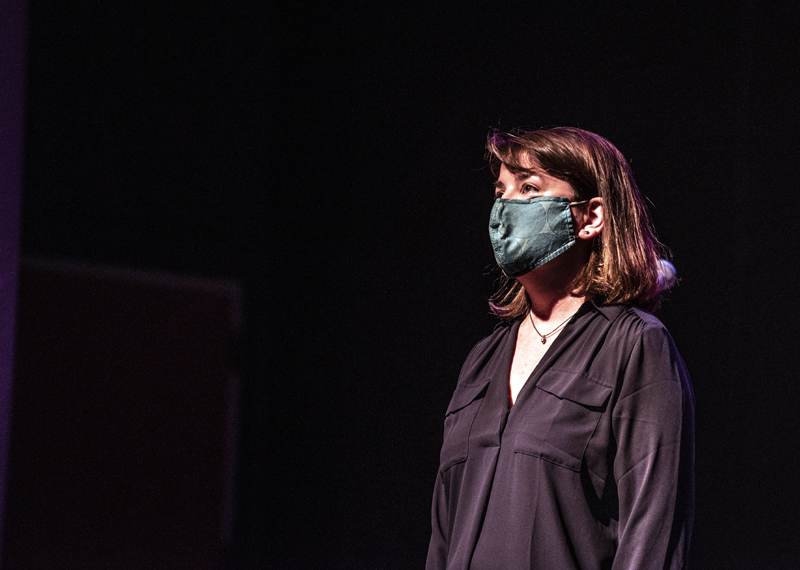 Executive Director Kate Fletcher welcomes a virtual audience to the Waldo Theatre in Waldoboro on Thursday, Dec. 3. Fletcher introduced the Maine-based Oshima Brothers, the second act to perform since the renovation of the historic theater. (Bisi Cameron Yee photo)

The Oshima Brothers released an EP, “Sunset Red,” at the end of summer — “all things Maine and summertime warmth.” They are currently working on new recordings in the studio at their Portland home, including their newest song, “Cadence,” released Dec. 4.

The Waldo continues to raise funds for ongoing renovation projects. The organization has spent the better part of 2020 seeking donations to meet an anonymous $43,000 challenge grant. They have raised $135,000 since February and need to raise another $22,000 by the end of the year to meet the terms of the grant.

To donate, go to waldotheatre.org/pages/donate or to the theater’s GoFundMe page at gf.me/u/y77xk7. The address for donations by mail is P.O. Box 587, Waldoboro, ME 04572.