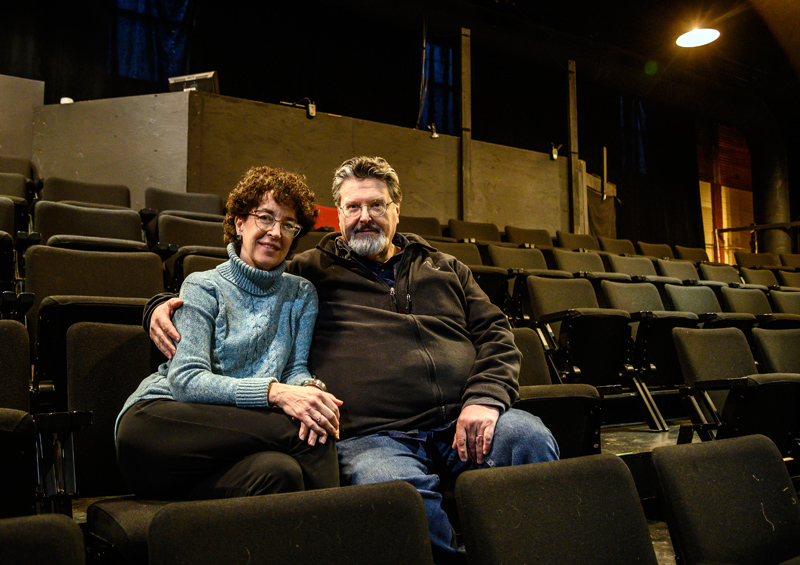 Joy and Griff Braley sit in the seats at the Parker B. Poe Theater in Newcastle on Dec. 21. The couple has described Heartwood Regional Theater Co., which they founded 20 years ago, as a “mom-and-pop” operation. (Bisi Cameron Yee photo)

Heartwood Regional Theater Co.’s 20th season began with an ambitious reflection on its roots and will build to a show that artistic director Griff Braley said will probably be “the hardest thing I’ve ever done.”

The Heartwood Theater was founded by Griff and Joy Braley in 2003 as a side project to Griff Braley’s work as an educator, teaching theater and English at what is now Wiscasset Middle High School. Heartwood’s first offering in its 2003 opening season was a traveling youth production of “A Village Fable” followed by a well-received performance of Brian Friel’s play “Molly Sweeney” at the Skidompha Library in Damariscotta.

“I just wanted to do the biggest, coolest production I could possibly do,” Griff Braley said.

That show, performed by students from schools throughout the Midcoast and staged in the school’s gymnasium, posted the largest audience in Heartwood’s history, selling 400-plus tickets a night, more than 3,000 in total. The elaborate production cost over $50,000 and had a cast and crew of more than 70.

The Heartwood shows that followed over the years may have been less elaborate in scale, but they remained ambitious in scope. With Griff Braley as the company’s artistic director developing a reputation for stimulating and high-quality productions and Joy Braley in the role of executive director, building and nurturing connections within the community, Heartwood grew 30% year over year for the first seven years of its existence.

In 2005 Griff Braley left Wiscasset High School after a 21-year tenure and accepted an offer to build a full theater program at Lincoln Academy in Newcastle. That offer marked the start of a collaboration that has produced a steady stream of acting and technical opportunities for LA’s theater students while giving Heartwood a permanent home in the Parker B. Poe Theater on campus.

Heartwood’s audiences have enjoyed more than 80 productions at the Poe, ranging from Greek tragedies to Sondheim musicals, from Broadway entertainment to original plays.

Former Heartwood board member Pam Gormley pointed to Federico Lorca’s Spanish tragedy “Blood Wedding” as an example of the kind of challenging material that fans of serious dramatic theater have found at Heartwood.

“I thought, ‘boy, how is anybody going to see that in Midcoast Maine?’” she said.

Current board President Jaja Martin has fond memories of “Down along the Cove,” one of Griff Braley’s original works.

“I loved it for so many reasons. It’s very Maine, it’s very fun, and it’s also sad … It takes you by surprise sometimes, and it’s larger than life sometimes. And smaller sometimes,” she said.

Jenny Mayher, Lincoln Academy’s communications director and the liaison between Heartwood and the school started out as an audience member, dating back to “Beauty and the Beast” in Heartwood’s third season.

“I was completely taken with just the high quality of production for a small town, for a high school cast … the attention to detail and the quality of the acting and singing,” she said.

A new production of “Les Miserables” was this season’s opener, selling out all shows and providing an apt bookend for Heartwood’s first 20 years.

Finding the right work to close the season was harder. In the end the Braleys chose “Hamlet” to be the capstone production. With its “brutally difficult” word-centric nature and its challenging casting, Shakespeare’s opus has long been at the very top of Griff Braley’s wish list.

Those who have been part of Heartwood’s journey and whom the Braleys credit with the company’s longevity and success – the students and teachers, sponsors and small business owners, board members and audience members – all have strong ideas about how and why Heartwood achieved its milestone season.

Choice of material, production value, and community support all played important roles, but most agree that the way in which Heartwood integrates education into its mission is where it shines brightest.

For Gormley, a Heartwood performance is “a different beast,” a unique style of theater that she considers a hybrid, where education shares the stage with entertainment for the benefit of performers and audience members alike.

“I think Heartwood offers a different level of theater experience … pulling in from all parts of the community, offering roles in the shows, offering behind the scenes work, offering this education,” said Mary Boothby, a local actress well known to Heartwood audiences. “Griff is very particular about the shows he picks. It feels like a master class every time I do a show with him.”

For Susie Stedman, the first president of Heartwood’s board of directors, ensemble acting is one of the cornerstones of the company’s mission, particularly in the youth productions.

Letitia Munson was one of those young people. She was a high school sophomore and a member of the stage crew in that first production of “Les Miserables.” She pursued a degree in theater production and wound up serving as Heartwood’s technical director for five years.

She sees the passion Griff and Joy have for not only educating and trying to get young people involved but also for sharing the magic of live theater with the community as the key to Heartwood’s ability to build and sustain the audience involvement that remains critical to its future.

From its earliest days Heartwood has focused on developing the talent necessary to bring live theater to the stage with educational outreach to schools throughout the Midcoast, with productions geared specifically toward high school and middle school students, and with a robust summer camp program that introduces young actors to both musical theater and Shakespeare.

Actor Stephen Shore made his professional debut in a Heartwood production. He found the experience transformative and returned to Heartwood not only to act but also to teach Shakespeare and stage combat in the company’s summer camp program.

“Expectations can feel high but the students come and they meet them,” Shore said. “It’s just incredible to watch them grow. They’re so talented and I remember them coming in and … being so small and so shy and they just command the space now. I see it when they walk on stage.”

“(Griff) doesn’t tell (students) what to do or what their character will do; he poses questions,” Martin said of how Heartwood challenges and inspires its performers. “You can see them … exploding out of their bodies, just reaching higher and higher and higher … just so enthusiastic, pushing their voices, maybe even too hard, in their enthusiasm to grasp the golden ring.”

For Mayher, who also functions as Heartwood’s photographer, one of her favorite parts of the job is watching students she knows blossom during rehearsals – the athlete on stage for the first time, the shy kid delivering a perfect soliloquy.

Mayher called Griff Braley “a brilliant educator,” one whose impact on young actors in Lincoln County and beyond has been profound.

“One of the gifts Griff gives to kids … is helping (them) understand what excellence is. He helps them see what they are capable of as an ensemble and as an individual. And then they get it. They snap in and they’re like ‘OK I want to be excellent. I understand why it matters,’” Mayher said. “Theater education helps kids plant themselves in center stage and say ‘hello, world.’”

For more information about Heartwood Regional Theater, go to heartwoodtheater.org.