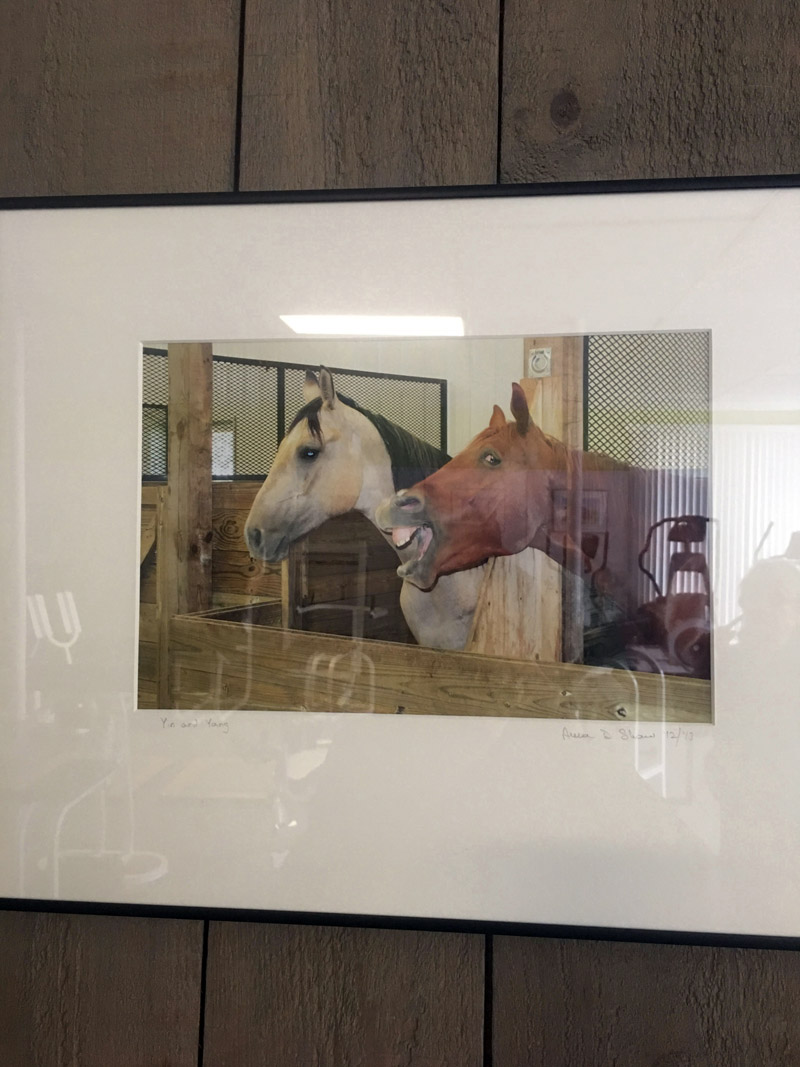 Newcastle photographer Anna Shaw’s sense of humor is front and center in “Yin and Yang,” a photograph of two horses — one very serious and camera-shy, the other clearly a ham. The workout equipment at Shapers Fitness Gym, where this photograph is on exhibit, is reflected on the surface of the piece. (Christine LaPado-Breglia photo)

Local photographer Anna Shaw’s current show on the walls of Shapers Fitness Gym in Damariscotta, like the one she exhibited there last year, is a delight for gym-goers as well as for visitors dropping in to see the art. Unlike last year’s show, though, which worked around the theme of memory, nostalgia, and place, Shaw’s new show is a simply a collection of pieces that she likes.

“Each time I have been invited to show my work at Shapers, I have tried to follow a theme, so that there will be continuity in the show,” Shaw writes in the statement accompanying the current exhibit. “The problem with that is there are pictures I enjoy sharing which don’t fit a big enough group to follow a theme. This time, I decided to simply share some miscellaneous pictures which I have enjoyed having. Some have been part of other shows and some are simply themselves.”

To say that there is no theme does not mean that there is not a type of continuity to this show. The 10 color photographs exhibited by Shaw – from the pretty, digitally altered image titled “Sheepscot Village” to the funny “Yin and Yang,” featuring a laughing horse, to the joy-inspiring “Sunset Boogie” – offer the viewer a taste of Shaw’s obvious interest in and contentment with what life has to offer.

The viewer cannot help but chuckle out loud when looking at the perfectly titled “Yin and Yang.” Shaw was in exactly the right place at the right time when she took this photograph of two horses – one white and reserved, the other darkly colored and seemingly hamming it up for the camera.

She was also similarly in the right place at the right time when she captured a cloud formation over her hometown of Newcastle that looks uncannily like a mountain peak poking through clouds, a piece she titled “Mt. Newcastle.” If one did not know better, one would think that there really is a mountain with that name.

Both “Sunset Boogie” and “Joy!” capture the exhilaration of people at the beach. “Sunset Boogie” features what appears to be a father and his two young children having fun at the surf’s edge. The youngest of the two is, endearingly, a tiny nude girl prancing toward the water. In “Joy!” a couple stands atop worn-down pilings holding hands that are raised up in obvious happiness. 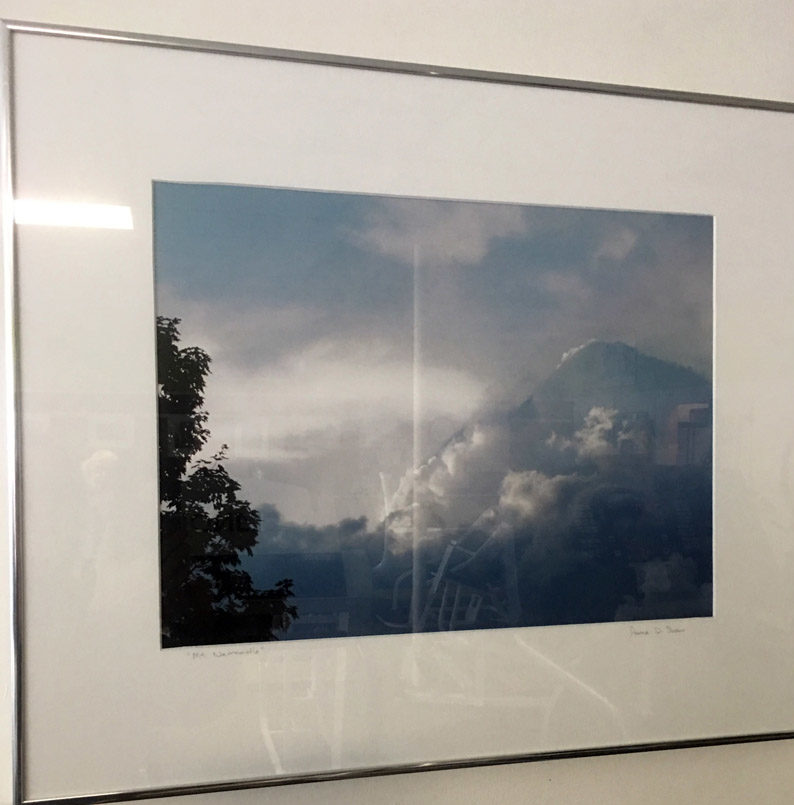 “Mt. Newcastle” is Anna Shaw’s magical photograph of a cloud formation that looks just like a mountain. (Christine LaPado-Breglia photo)

Other photos in the show include “Networks #2” and “Networks #3,” digitally manipulated images of colorful fishing nets that almost have the appearance of abstract paintings; “Lindisfarne Town and Gown #1,” of a peculiarly shaped wooden hut near the water’s edge and a castle in the far distance; and “Holy Island Beacon,” of a tall, cross-shaped gravestone or monument on the bank of a body of water with other monument-like objects in the distance. In the case of the latter two pieces, one wonders what the story is behind each image. When, for instance, was the last time people lived in the areas depicted?

All of Shaw’s pieces invite the viewer to place her- or himself in the scene to either explore its interesting elements or simply to delight in the immediacy of the image, as in the case of “Yin and Yang” and “Sinking, But Still Sheltering,” of a falling-down wooden shed that still houses a tractor.

Shaw’s work is well worth seeking out. Her show will run through Wednesday, May 31. Shapers Fitness Gym is located at 90 School St., Damariscotta. Call 563-3030 for more information.