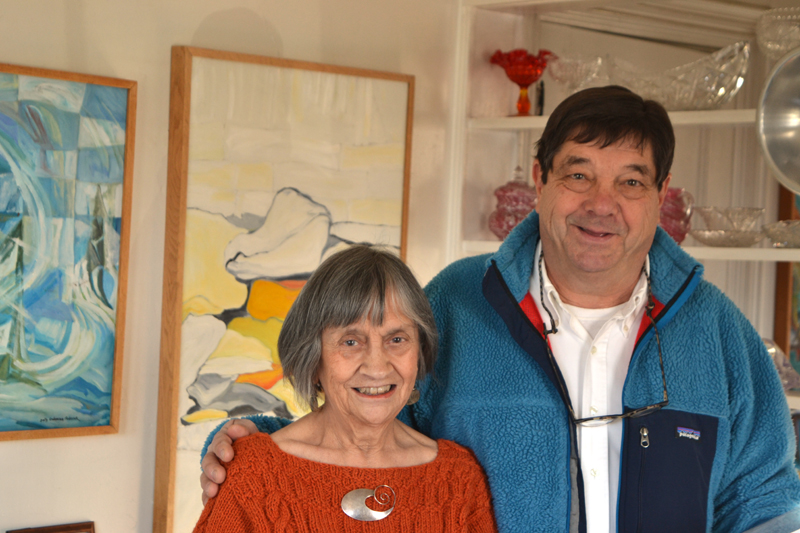 The Dec. 3 opening reception for artist Sally DeLorme Pedrick’s first local exhibit since 2011 was well-attended, even an hour before the official start time of 3 p.m. People were already showing up in significant numbers at about 2 p.m. on the crisp Sunday afternoon at The Library Art Studio, Pedrick’s home studio in Round Pond, enthusiastic to view the artwork on display in her current show, “A Mirrored Age.”

Pedrick’s most recent show before “A Mirrored Age” took place at the Eptek Art & Culture Center on Canada’s Prince Edward Island late last year. She has shown her work at a number of prestigious places over the years, including The Art Institute of Chicago, the Delaware Art Museum, the Farnsworth Art Museum in Rockland, and the National Museum of Women in the Arts in Washington, D.C.

“A Mirrored Age” features numerous oil paintings from Pedrick’s lengthy career, several of them incorporated into frames that also contain mirrors. A sizable number of her beautiful woodcut prints are on exhibit as well, including some in process on a work table. It is a nice touch for visitors to see how Pedrick gets from point A to point B in her woodcut work, and the friendly Pedrick is more than happy to elaborate for anyone wanting more information. 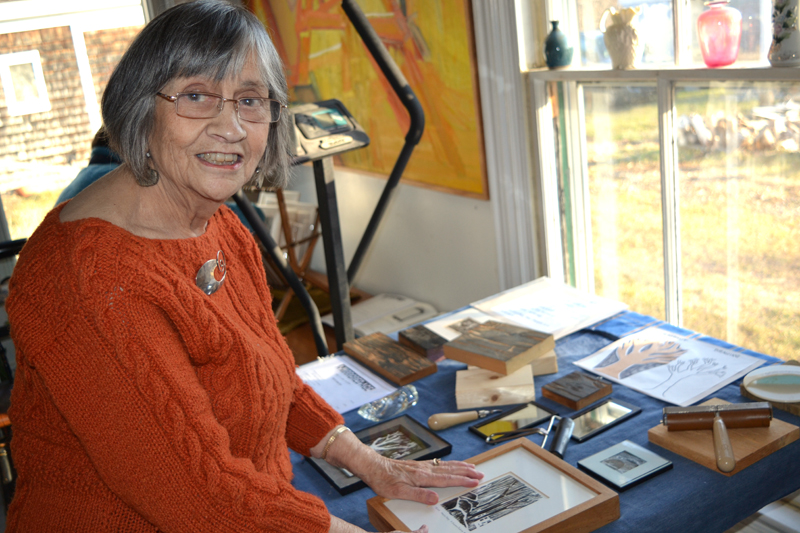 Sally DeLorme Pedrick, who creates woodcuts in addition to painting and blowing glass, talks about her woodcut process at a Dec. 3 opening reception at her home gallery, The Library Art Studio in Round Pond. (Christine LaPado-Breglia photo)

Pedrick’s “Empress of the Sea” is painting No. 6 in the gallery’s Bay Window Room, according to a handy handout available from Pedrick. It is a large oil painting on linen depicting a ship’s figurehead at the Maine Maritime Museum in Bath. Pedrick brought the figurehead to life by portraying it facing into a green, gray, yellow, and white abstract wind. Pedrick said took it her 40 years to complete the painting, which was thus wet at various times over the years.

In a corner of her kitchen, Pedrick has hung two lovely pieces that play off one another nicely. “Transparency” is an oil painting in blues and greens of a glass jar inside another see-through container. Below it is “Bronze to Glass,” a bold woodcut of a Mason jar standing in front of a pitcher of sorts.

Pedrick is a glassblower in addition to being a painter and printmaker. Nods to her glass work appear in such paintings as “Molten Glass,” depicting an abstracted bright-orange glass factory set against a turquoise background. (“Molten – the whole building becomes a glass furnace,” said Pedrick.) “Mining Sand for Glass” is a very large, colorful, intricate piece that Pedrick exhibited at the Delaware Art Museum. 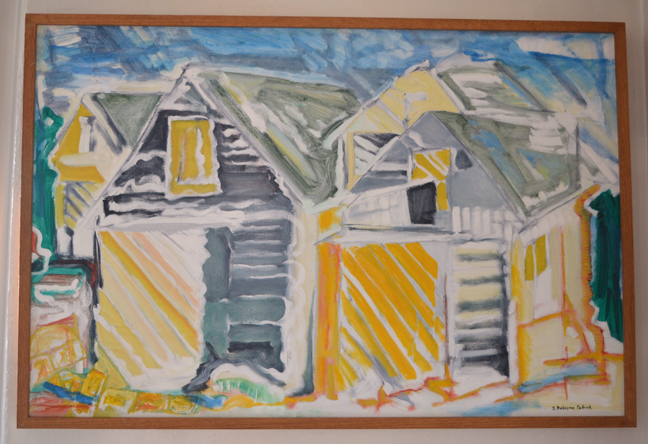 “Box Six” is a small, highly abstracted piece Pedrick created when she was living in southern New Jersey upon reading a manifest from the 1700s after a ship carrying 66 boxes of window glass sank in Delaware Bay. Pedrick said she had intended to do a painting representing each of the 66 boxes, but only “got as far as box 6 and said, ‘That’s enough!’”

Pedrick’s locally focused “Headwaters – Damariscotta River” is a beautiful abstract painting in blues featuring forms that suggest boats and reflections on water. “Hopscotch Barn” is another striking piece centered on a local feature – the barn that resides in Pedrick’s backyard after having been moved four times around the Round Pond area over a number of years. Pedrick said she included four different rooflines to allude to the barn’s four incarnations.

Pedrick’s work on exhibit in “A Mirrored Age” is spectacular and well worth seeking out between now and the show’s closing date of Jan. 14, 2018.

The Library Art Studio is located at 1467 State Route 32, Round Pond (Bristol). Call Pedrick at 529-2345 to set up a time to view her current show, or drop by – if she is home, she will gladly accept visitors.