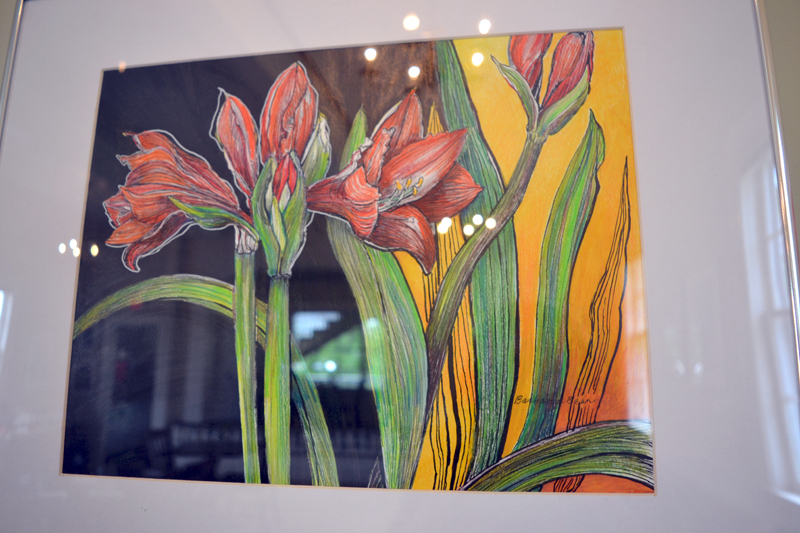 Brunswick artist Barbara Bean, a retired clinical social worker, spent a great deal of her pre-work years drawing. During her 30 years as a social worker, she encouraged children with developmental disabilities to draw as a means of self-expression. Since her retirement, Bean has been expressing herself in her home studio for many hours a day. Some of the beautiful results of her long hours indulging her passion for drawing – and painting – currently hang on the walls of Savory Maine Dining & Provisions in Damariscotta.

Botanical art, which almost seems like a lost art, is Bean’s forte. “In botanical art, the emphasis is on the plant or flower but without the requirement for all the information required by the botanists,” according to the website botanicalartandartists.com. “There’s more of an emphasis on the aesthetic value to be found in the plant or flower.” Bean’s pieces, while not lacking detail, definitely focus on the aesthetics of her subject.

“Dendrobium,” a large mixed media piece, pictures a dendrobium orchid, drawn in detail in black ink and colored in with what appears to be both watercolor paint and colored pencil in shades of red, orange, and green. “Phalaenopsis & Friend” is the title on the wall card accompanying a finely detailed mixed media piece that is titled “Phalaenopsis and Chysis laevis” on the piece itself, written in pencil in the lower left across from Bean’s signature. Both titles refer to the two types of orchid pictured. The Chysis laevis orchid is fully fleshed out in yellow and green while the Phalaenopsis orchid appears in largely uncolored pen-and-ink form, providing a pleasing contrast between the two. Bean’s method of representing the Phalaenopsis orchid drives home the point that she is more than capable of drawing a flowering plant in great, accurate detail, and color is an extra frill we get when she really wants to elaborate. “Reservation for Six,” of a flowering plant done entirely in black ink, drives home this point. 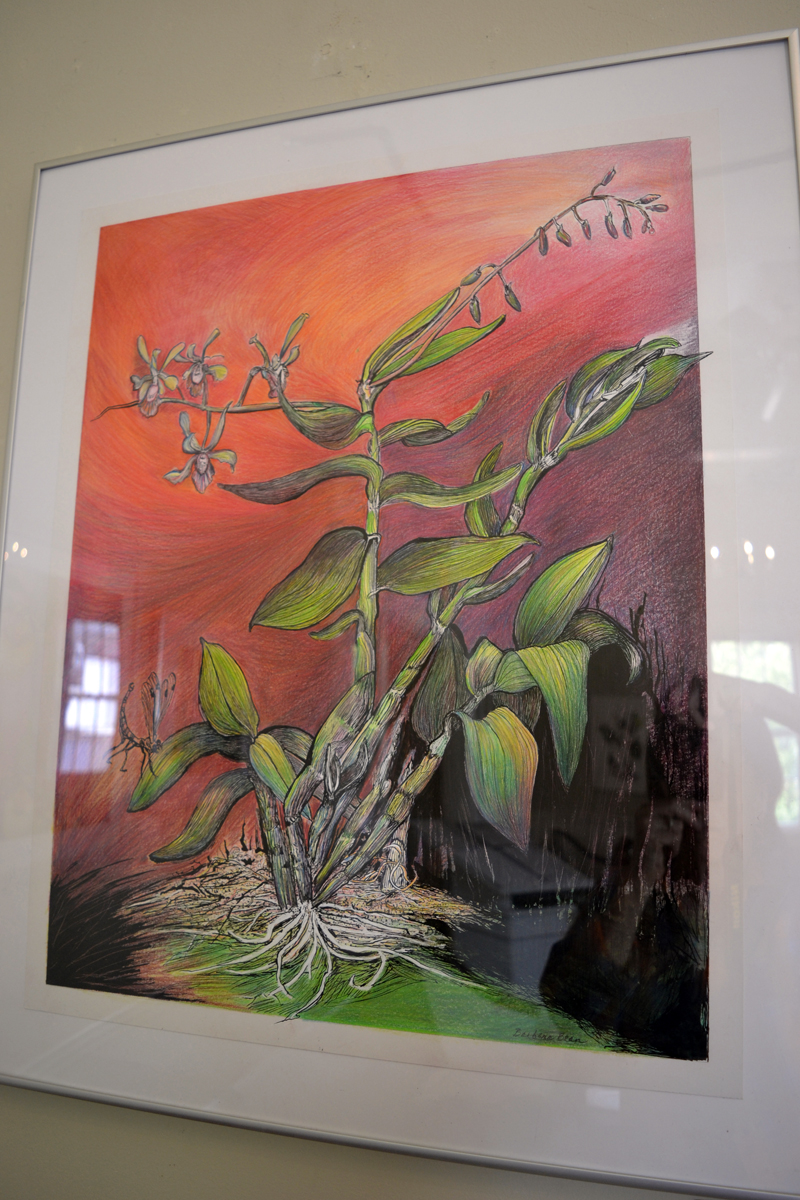 It is a rewarding experience to study such colorful, detailed pieces as “Cymbidium Gone Wild,” a large mixed media work of Cymbidium orchids against a plain white paper background (she does not add color to what might be seen as the sky area), “Studio Cymbidium,” and “Studio Orchid.” One begins to see that the orchid resembles a certain part of the female anatomy, though it does not seem to be Bean’s intention to push that idea in any way. Just as so many people interpreted the late Georgia O’Keeffe’s flower paintings in an erotic way that she insisted she did not intend, it seems that Bean’s work simply represents the flower so well that the viewer is free to make that connection.

As enjoyable as it is to devote attention to each one of Bean’s pieces, one is also challenged when one approaches pieces such as “Seldom Seen” and “At Night in the Studio,” of plants seemingly in the moonlight, with butterflies on them. Those not adequately schooled in botanical identification (as this reviewer admits to being) will find no assistance in identifying the flowers pictured by relying on the titles, as can be done in the case of the orchid pieces. That is not actually a problem, as Bean’s work is easily appreciated without knowing the names of all the flowers one is looking at. But one trusts that Bean knows the identification of each plant that she draws, and one begins to wish she were there to ask.

Bean has successfully merged the world of art with the world of scientific study of plants, and insects, for that matter. This enables the viewer to get joy out of both standing back and taking in the beauty of the color and composition of each piece, as well as scrutinizing each piece up close to take in the fine detail.

One can imagine that Bean’s botanical artwork would do nicely on display in such a place as a botanical garden’s visitor center or other plant-focused destination, such as a nursery. It also does wonderfully as an art exhibition in a serene restaurant space, such as Savory Maine.