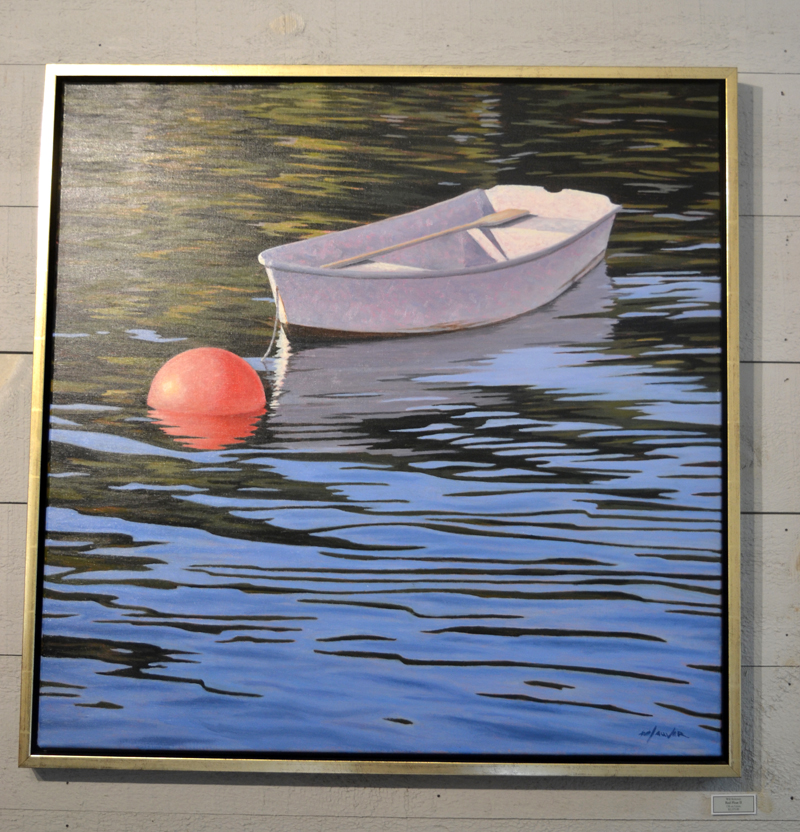 “The Boat Show,” a themed art show that opened Friday, June 30 and runs through Sunday, July 23 at Kefauver Studio & Gallery in Damariscotta, is totally focused on boats and things having to do with boats, as the name of the show implies. It features 22 artists, including gallery owner and painter Will Kefauver. The show is notably rich with photographs and paintings, though there is a smattering of pieces in other mediums, such as Dick Webster’s hand-carved half-hulls and the work of political cartoonist Greg Kearney. This year marks the second year that the gallery is presenting “The Boat Show,” owing to its success last year.

It is interesting to see the many different ways that an artist can interpret a boat. Deborah Kozak has several reduction linocuts in this show, all expertly done and easy on the eye. “At the Ready,” which greets gallery-goers as they enter the front door, pictures two small rowboats at a dock in beige, brown, and muted teal. Not far away sits DiTa Ondek’s small acrylic painting “5 Green Dinghys” on a small easel. Ondek, who had several entertaining paintings of old trucks in last year’s Christmas-season show at Kefauver Studio & Gallery, turns her eye to boats in this show, and to great success. 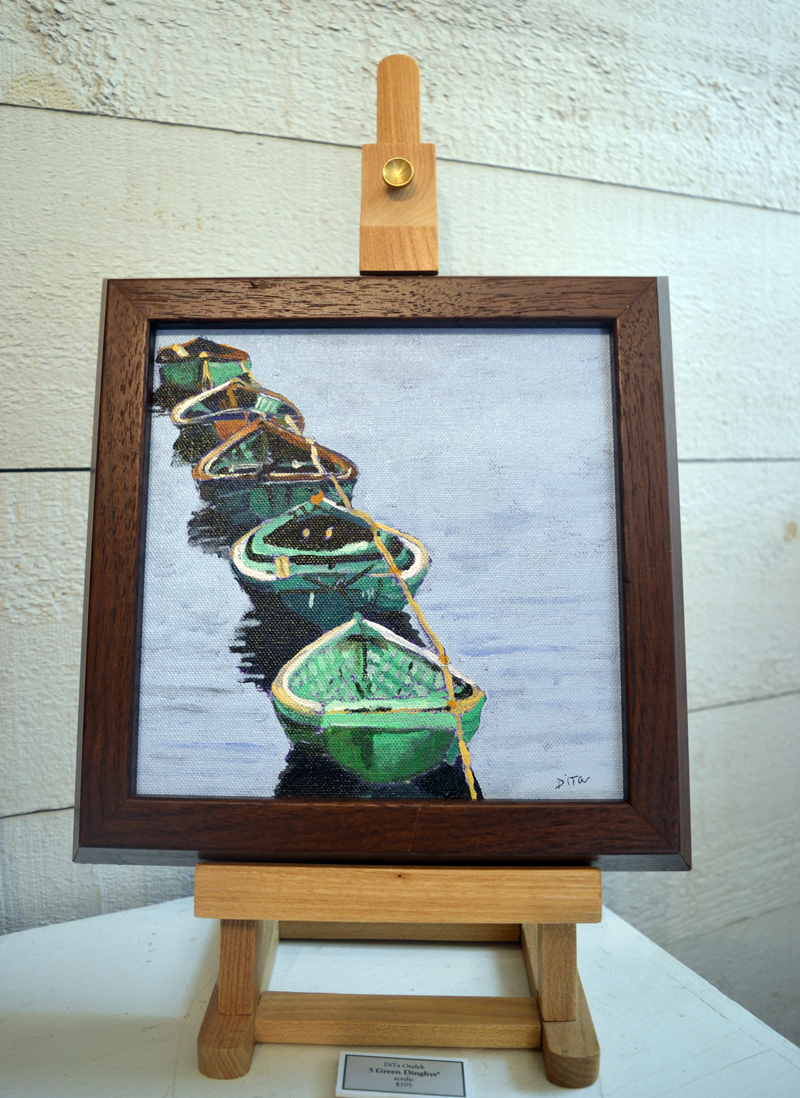 Photographer Rachael Wyman, who lives on a boat, offers an eye-pleasing photo of that very same boat, the front of it entering the frame from the left. Photographer Michael Fillyaw’s “Waiting in Cape Porpoise,” a photo on acrylic, nicely resembles a charcoal drawing from a distance. His photo on aluminum, “Home to You,” of a man rowing a small boat toward two larger ones at either sunset or sunrise, is also very nice.

Photographer Jim Nyce, who left the corporate world after 35 years to concentrate on his photography, as his artist statement points out, has three excellent pieces in “The Boat Show.” One in particular, “layers,” features a skiff sitting in still water, the light hitting just right so that the boat casts two shadows in the water beneath it, each of a different size and color.

Marcia Brandwein’s painting “Inside the Barn” is notable for its resemblance to the work of the late sculptor Louise Nevelson. Its interpretation – in shades of beige, brown, and gray – of a boat standing on its end alongside other objects stored in a barn reminds one of Nevelson’s monochromatic wooden assemblage pieces.

Lydia Kaeyer’s watercolor “The Western Wave at Rockland Pier,” one of three watercolors she has in this show, is striking for the heavy lines she employs in defining her subject matter. Judith Fischer’s two paintings, of boats from unusual angles, are also striking, in part for her choice of almost-pastel sunset-like colors and her lovely depiction of clouds. 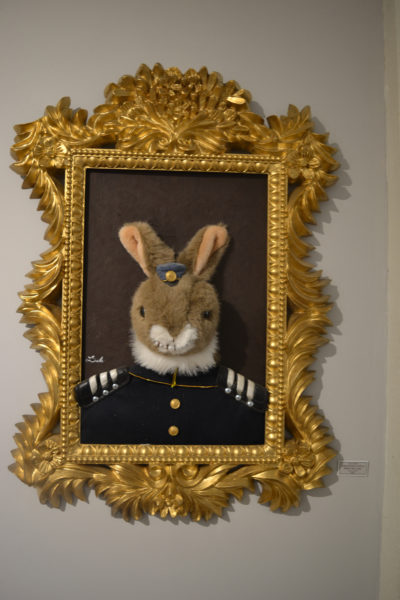 And let it be said that no Kefauver show is really complete without at least one piece by local artist Dale Dapkins. Lucky for show-goers, “The Boat Show” has three Dapkins pieces. “Captain Wilford” is an acrylic piece for which Dapkins took a painting he bought at a thrift store and painted over certain parts to create an entertaining collaboration-of-sorts (he credits both himself and the original painter). Capt. Wilford, after Dapkins’ additions, looks somewhat like a cross between a Wookiee from “Star Wars” and an owl, looking distinguished, of course, in his captain’s hat.

Dapkins’ mixed media piece “Admiral Robert (Call me Rabbit) Hart Lipps,” in its wildly ornate gold frame, is just the type of over-the-top work that Dapkins lovers love. “Admiral Robert” is basically a portrait of a stuffed rabbit, looking dapper with his epaulets made from the tongues of a kid’s old striped sneakers. Near it hangs the hilarious “Perils of the Sea,” another thrift-store paint-over piece featuring an oblivious man with a crazy grin (added by Dapkins) driving a boat in choppy water while a fierce geyser of white-and-gold water bursts through the back of his boat and red, gray, brown, and white smoke explodes from the boat’s smokestack. It is Dapkins at his finest – thanks, of course, to the original effort by someone named Tony DePiero, whose signature is at the bottom right-hand corner of the painting across from Dapkins’ bold signature, “Dale.”

Dapkins, for those wanting more of the witty artist, can be found on Facebook.

Kefauver Studio & Gallery is located at 144 Bristol Road in Damariscotta and can be reached at 226-0974. It is online at kefauverstudio.com.