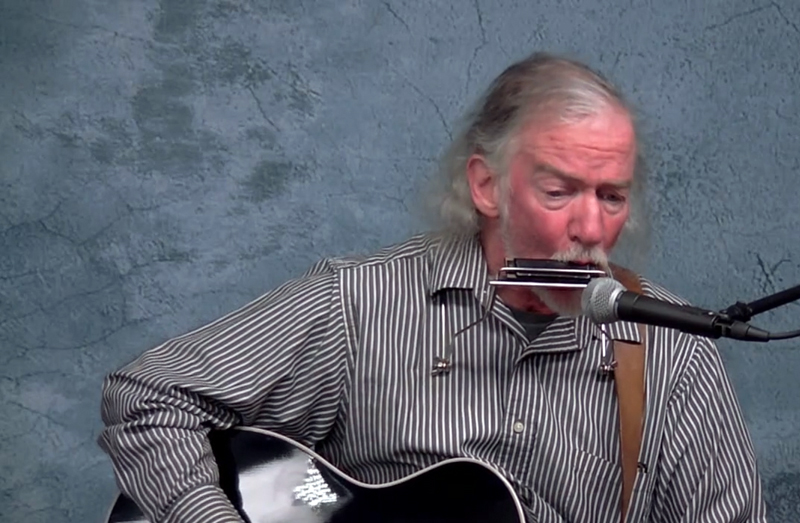 Jon Couch wails on the harmonica and plays guitar for his rendition of “Train of Glory” during Damariscotta Open Mic’s Peaceful New Beginnings show, available for streaming at lctv.org. (Screenshot by Evan Houk)

Performers from Damariscotta Open Mic rang in the new year by recording a collection of cleansing folk performances for a virtual Peaceful New Beginnings celebration, titled “It’s All About Community.”

The stated theme of the performance was “all about keeping the community safe, and keeping the COVID-19 pandemic at bay,” which, unfortunately, involves staying at home as much as possible right now.

The songs and stories do offer some down-home comfort and hope for a brighter 2021, in the form of a mix of folk covers and original songs, as well as a reading of a musical Mark Twain story by Marie Martin. They are a welcome reminder that no matter how chaotic the world or life may be, all that pain can be erased in an instant by simply getting lost in the magic of music.

This is the third annual Peaceful New Beginnings event the performers have hosted to raise money for Inn Along the Way. The event was also a fundraiser for Lincoln County Television, which broadcast the show live on New Year’s Day and has it available for streaming at lctv.org.

Inn Along the Way is building a “unique and innovative community design in which elders live interdependently in a neighborhood-style setting of small, environmentally friendly homes,” according to the organization’s website.

Construction is ongoing on the nonprofit’s property, the former Chapman Farm at 741 Main St. in Damariscotta. 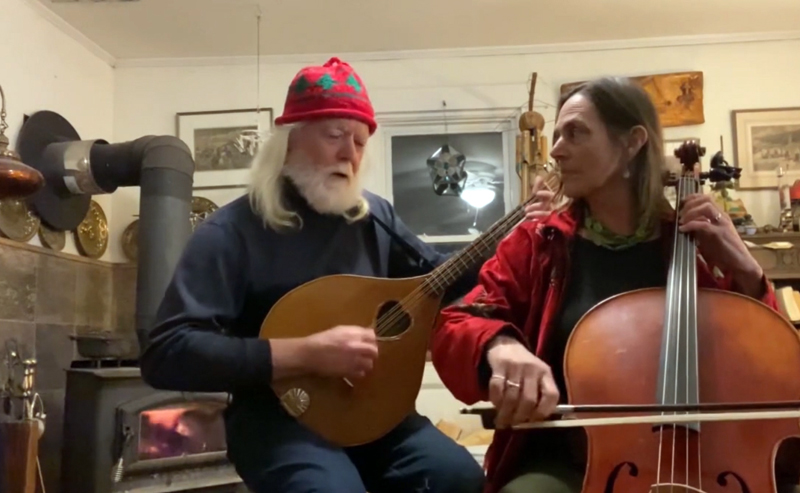 The duo Buxbaum and Dunn performs the original song “Eat the Rich” during Damariscotta Open Mic’s Peaceful New Beginnings concert. Brian Dunn plays an octave mandolin he made himself and Laura Buxbaum plays the cello. (Screenshot by Evan Houk)

The performance starts off with a digital visualization of flipping through scrapbook pages filled with photos of Inn Along the Way and past Damariscotta Open Mic performances at Chapman Farm. This introduction creates a strong feeling of nostalgia for the opportunity to gather together and enjoy live music in person.

This appetite for live music is whetted somewhat by the outstanding musicianship and heartfelt, unique performances of everyone involved in the production — although in my opinion, and I’m sure the performers would agree, nothing beats a live show.

John Couch hosts the event from the LCTV studio in Newcastle, first playing a few tunes and then providing a strong introduction for each succeeding musician or group of musicians, each of whom provided homemade recordings of their performance.

Couch kicks it off with a solo, finger-picking version of Lyle Lovett’s dreamy “If I Had a Boat” and busts out the harmonica holder for an energetic rendition of “Train of Glory.”

Couch then introduces the Waldoboro duo Buxbaum and Dunn, who play two original folk songs. Brian Dunn plays an octave mandolin, an unusual instrument that he built himself, and Laura Buxbaum accompanies him on cello and vocals, with a comforting fire blazing in the black pipe wood stove in the background.

Buxbaum’s cello offers a vague reminder of Nirvana’s soaring MTV Unplugged acoustic concert recorded in 1993, which was accompanied with a cello, unusual for a rock band. 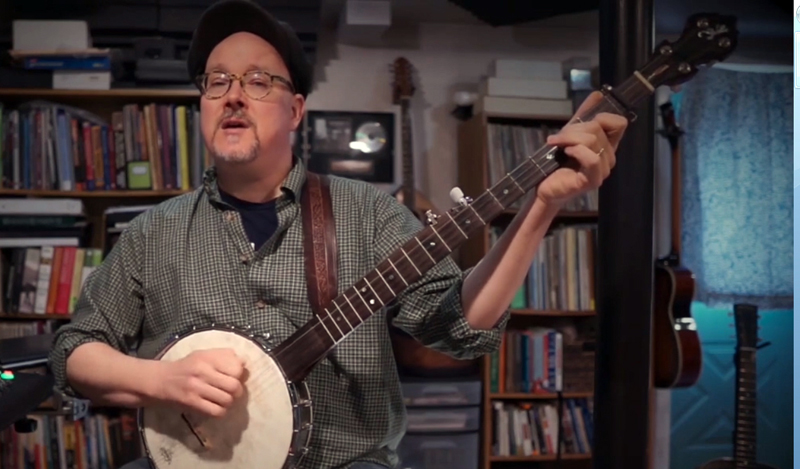 “Eat the Rich” was inspired by Dunn’s older brother, as well as Jonathan Swift, Dunn says. The song is a powerful performance with biting lyrics that make a political statement — although it is left open to interpretation where on the political spectrum the singer lands.

Perhaps the song is merely a statement about the ridiculousness of all the narrow-minded and extreme partisan squabbling that seems to be getting us nowhere. In any case, it surely sets the wheels of the mind turning.

The nationally recognized recording artist Jud Caswell is a clear highlight of the performance, as he plays a brilliant guitar and then banjo accompanied by his pitch-perfect storyteller’s voice and thoughtful lyrics.

This past March, Caswell released an album called “Live at the Seagull Shop Restaurant,” capturing his performances at the iconic seaside shop at Pemaquid Point, where he was a staple until it burned down in September.

After its release, the album shot to No. 1 on the Folk Alliance International chart and, in April, landed at No. 5 on the National American College and Community Radio Chart.

Caswell has since performed benefit shows to raise money for the rebuilding of the Seagull Shop.

Caswell’s second song, “That’s the Way We Climb,” is reminiscent of folk icon Woody Guthrie, with the equivalent moral heft of a Guthrie tune contained in the lyrics. 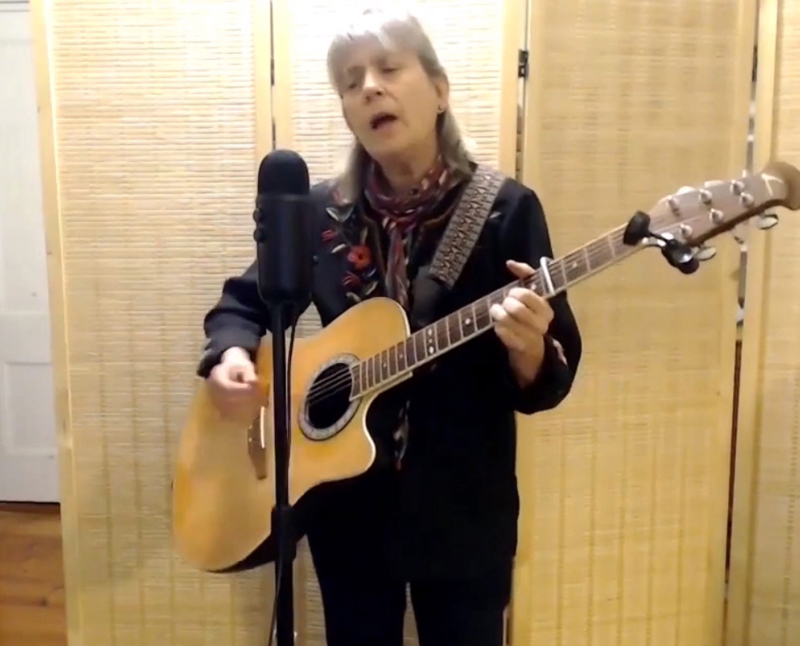 “Lean upon each other / that’s what we can do” is one of the uplifting and practical refrains in the song that provide pertinent advice heading into 2021.

The middle of the show is punctuated with Marie Martin’s reading, accompanied by matching background tunes, of Mark Twain’s “George Washington’s Boyhood.”

The story starts with an introduction detailing Twain’s numerous failed musical pursuits before a hilarious and abrupt conclusion.

Sarah Dawn provides perhaps the most soothing performance of the whole show with her soft, seamless voice and gentle guitar work. Her songs and intimate performance are so soothing, they nearly evoke the feeling of an autonomous sensory meridian response, or ASMR, brought on by specific auditory or visual stimuli. There is a genre of videos on YouTube dedicated to generating this calming effect, sometimes described as “low-grade euphoria.”

Sylvia Tavares then closes out the show with a down-home country version of folk singer-songwriter Kate Wolf’s “Give Yourself to Love,” a gentle reminder of where we should keep our focus.

Damariscotta Open Mic has held numerous fundraisers throughout the years, for organizations such as the Maine Organic Farmers and Gardeners Association, the Damariscotta Mills Fish Ladder Restoration Project, Healthy Kids, and Spectrum Generations’ Coastal Community Center. This past October, the group of musicians held a virtual fundraiser for Inn Along the Way via Facebook Live.