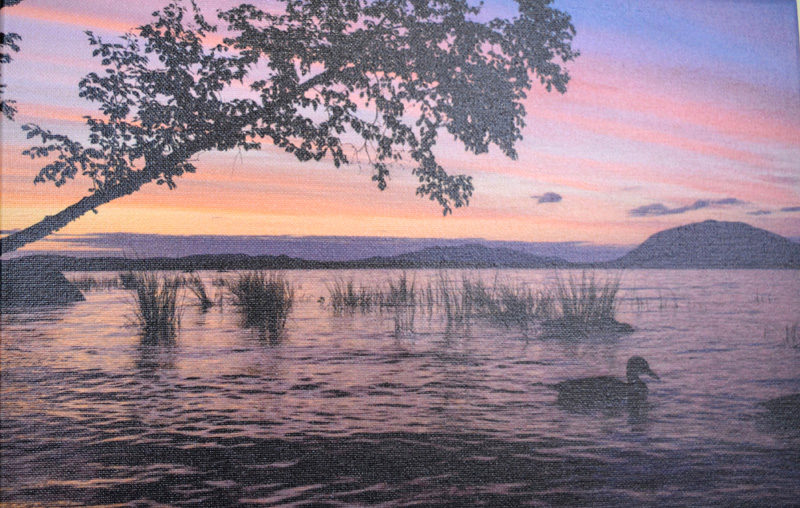 Kate Coupland, a Ph.D. student at the University of Maine’s Darling Marine Center in Walpole, currently has a small, eye-pleasing collection of photographs on exhibit on the walls of the cafe at Rising Tide Community Market in Damariscotta. A relative newcomer to Maine – she has lived in the Pine Tree State for a year and a half – Coupland brings a fresh eye to Midcoast Maine’s landscape and other well-known sights. 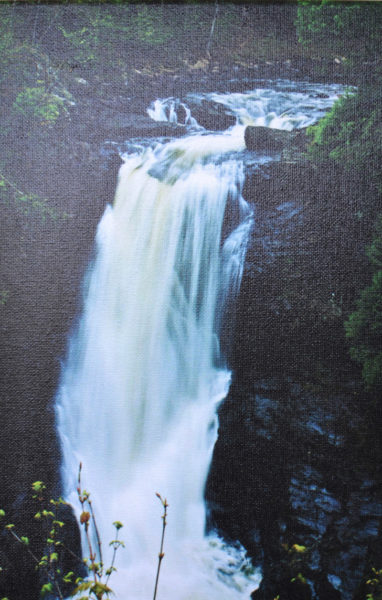 While one of the photographs is somewhat similar to the one many viewers of postcards have seen – taken from the beach looking up over the striated rocky coastline to the lighthouse – the other two are not one’s standard postcard photos.

One is a night shot of the lit-up lighthouse, framed in the picture so that it is off to the right of the canvas. Center stage is what appears to be the aurora borealis, delicately and colorfully lighting up the dark sky. Wild roses in the foreground are, interestingly, partly lit by some source, which adds to the photograph’s air of mystery. Equally intriguing is Coupland’s interior shot of the lighthouse looking straight up through the decorative spiral metal staircase, its ascending swirls fittingly reminding one of a spiral seashell.

“Leaf in Ice” is a photograph of a brown autumn leaf frozen in pond ice. The leaf is surrounded by a somewhat concentric-circle pattern of cracks in the ice. The blue tinge in the lower half of the photo that might be a reflection of the blue sky adds color to this lovely shot.

Coupland’s two animal photos express the innocence of young animals and the experience of those more seasoned. “Bald Eagle on the Hunt” is a strong, framed, profile shot of a stern-looking adult bald eagle sitting on a bare-branched tree in winter, intent on catching its next meal. “Fox Kit at Darling Marine Center” is a sweet photo of a fluffy fox kit standing in forest leaf litter, looking with its big, black, baby eyes directly at the camera.

“Hydrangea in Bloom” is a striking shot of a lime-green-and-white hydrangea flower with pink-tipped petals, taken against a dark background. “Tidal River” nicely captures what appears to be a narrow stream flowing within a river, its clear, snaking water contrasting with the brackish river water surrounding it.

Coupland clearly loves her new surroundings and she has no trouble conveying her affection through her photographs. Her show will run through Wednesday, Nov. 23. Rising Tide Community Market is located at 323 Main St., Damariscotta.