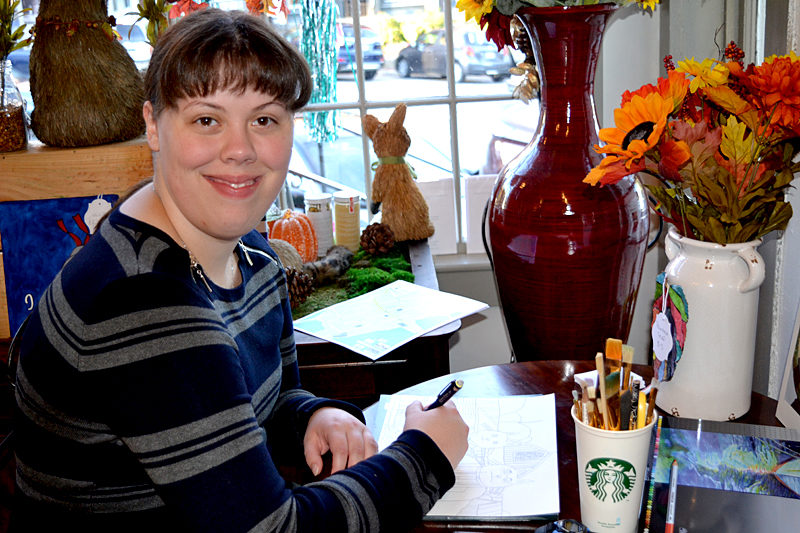 Self-described autistic artist Barbara Welborn, of Wiscasset, creates her take on the iconic Grant Wood painting “American Gothic,” featuring cats instead of people, at Beelicious during the last Wiscasset Art Walk of the season on Thursday, Sept. 29. (Christine LaPado-Breglia photo)

At Beelicious in downtown Wiscasset, Barbara Welborn was at work sketching her take on Grant Wood’s iconic painting “American Gothic” – only Welborn was drawing cats as the subjects of her piece instead of a man and a woman.  The 22-year-old self-described autistic artist, whose colorful body of work is largely feline-focused, was on hand to chat with visitors to the tiny specialty market on Thursday, Sept. 29 during the last Wiscasset Art Walk of the 2016 season.

“I worked really hard on that,” Welborn said of an impressive, large, mixed-media self-portrait on display near the table where she sketched. Welborn – who has been making art “since I was about 3,” as she put it matter-of-factly – was one of a number of artists on hand at the numerous venues participating in the Wiscasset Art Walk. In addition to visual art and artists, musicians – such as Phippsburg folk duo Married with Chitlins – and jewelry and flower vendors were also out and about on the streets of Wiscasset and inside a number of venues, interacting with the sizable number of people buzzing about. 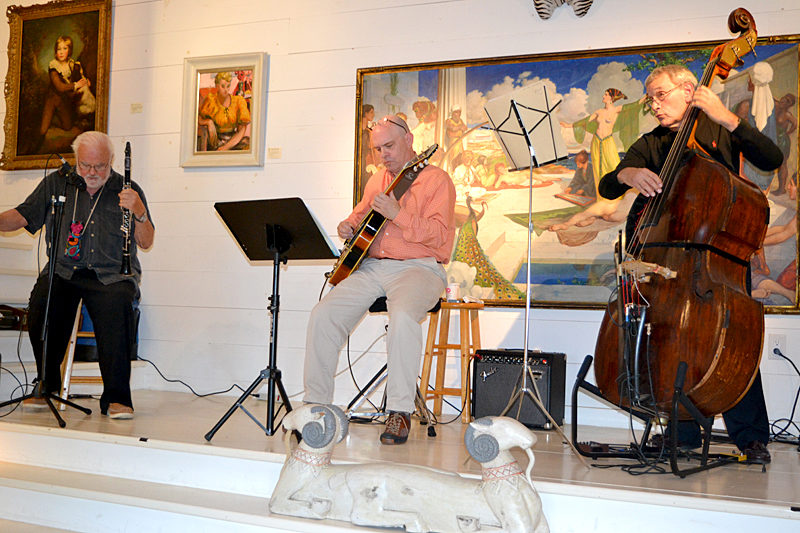 The music of Terry’s trio – finely improvised jazz standards that included Terry executing a jaw-dropping whistling solo – provided a perfect backdrop for viewing the 20th-century paintings by various U.S. and European artists and the boundary-pushing photographs of Keith Hamilton.

Hamilton’s many highly creative nudes occupy a large portion of the WBG space. Not recommended for a tour of schoolchildren, as one person said, Hamilton’s nudes – such as “Naomi II,” of a woman with a goose, and “Winter in Vermont,” a large archival print of a naked man on a bear-skin rug warming himself by the fire in his living room while his wife reads a novel by Nabokov – are interesting, provocative viewing for adult gallery-goers. Hamilton’s “Minor Repairs” is entertaining: a naked, corpulent man seems to attempt to fix a toilet tank with a hammer while a raccoon is seated on the toilet, a wad of toilet paper in its front paws.

“4th of July, American Future” brings to mind the current presidential-election cycle in all its tumult and unpredictability. In this large work, Hamilton presents seven people marching in a ragtag, circus-like parade – one is a large woman wearing only underpants and a fully unbuttoned dress carrying an American flag while she pushes a masked, naked woman in a wheelbarrow carrying eggs and a chicken.

On the tamer side, Hamilton weighs in with a 3-D mixed-media wall hanging of a hen with a woman’s head titled “Polly the Provider.”

Notably, Hamilton’s less risque photos are on display at WBG Modern and Contemporary’s sister shop on Main Street, Wiscasset Bay Gallery. “Poe’s Daughter” features a young, dark-haired, clothed woman holding a crow, and “Naomi” is another photo of the woman with the goose, but the viewer cannot see her breasts. Largely, though, Wiscasset Bay Gallery offers many 19th- through 21st-century paintings by American and European artists, with a focus on mainland Maine and Monhegan Island.

Printmaker R. Keith Rendall’s gallery is next door to Wiscasset Bay Gallery, at 65 Main St., and is a must-see for anyone checking out the abundance of excellent art in Wiscasset. Rendall was in his shop during Art Walk to greet his many visitors and talk about his work, which is physically huge, for the most part, and beautiful.

Rendall focuses on local wildlife – whales, kingfishers, eider ducks, moose – and he never, as he explained to two Wiscasset Art Walk attendees, works from photographs. “I only do images that I have the experience of,” he said. For one piece – his lovely “Great Blue Heron” – it took him about a year of repeatedly visiting the same spot on Rutherford Island, near South Bristol, to get the exact look he was after: that of the heron beginning to take flight.

“A Cupsuptic Crossing,” Rendall’s massive woodcut of a number of moose in an exceptionally formidable wooden frame and stand, is nothing less than magnificent. His shallow-relief carving in jatoba wood called “Brook Trout” is sublime, as is the “woodcut with rust” print, also called “Brook Trout,” that he created using the carved piece. 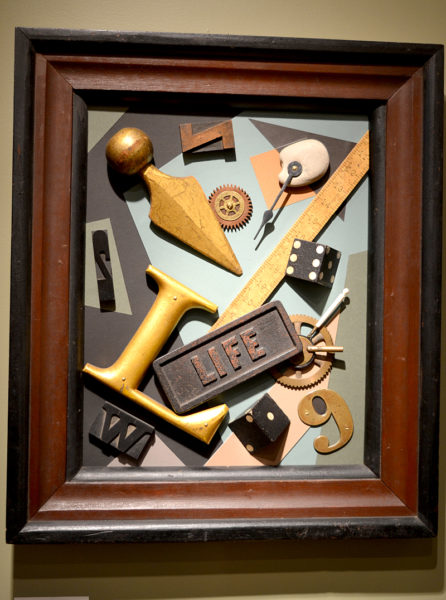 Sylvan Gallery, just up the block from Red’s Eats, on Water Street, was a busy place. While Married with Chitlins serenaded Art Walk attendees in front of the gallery, visitors inside were treated to the fine artwork of Charles Kolnik, Stan Moeller, Wiscasset painter Susannah Haney, Neal Hughes, and more. Over at John Sideli Art, at 43 Middle St., Sideli himself was on hand to talk to visitors about his bold mixed-media assemblage pieces.

Midcoast Conservancy’s Art Walk offering – hors d’oeuvres, live guitar music, and the paintings and presence of Alna artist Kate Nordstrom – was a definite highlight of this last Wiscasset Art Walk. The Water Street venue was abuzz with people stopping in to view Nordstrom’s uplifting large impressionistic paintings of local landscapes, and some smaller pieces, and chat with the very personable Nordstrom.

One of Nordstrom’s large pieces, containing two houses and an assortment of animals, was “a personal narrative, a dreamscape,” she said. “All the others are based on real places in Lincoln County; this one is not.”

Nordstrom pointed out a codfish, a salmon, a snapping turtle, and a snowshoe hare in the painting. “They are all native to this area,” she said.

The “overarching fish” above the house, she said, “is the spirit of the place.” Of the snails crawling on different parts of one of the houses, she said, “Here are two snails which will at some point meet up – but not for a long time.”

It was Nordstrom’s playful, engaged attitude that seemed to capture the spirit of the evening for everyone in attendance at 2016’s last Wiscasset Art Walk.