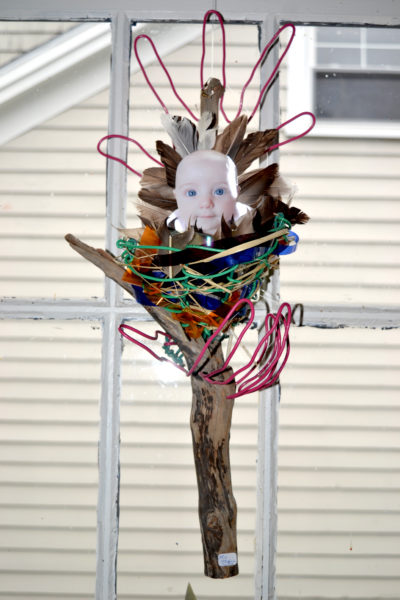 Marnie Sinclair has five grandchildren. They are the Damariscotta artist’s prime motivation for the environmentally focused work she has been creating since 2010. One such piece – a 3-D mixed-media construction titled “Acidification” – draws attention to the fact that an increase in atmospheric carbon dioxide is decimating the world’s coral reefs. Another piece, “Earth Nest,” features a photograph of her 6-year-old granddaughter Winnie as a baby, cradled in a nest constructed of wire and driftwood. The piece’s description card on the wall in her Bristol Road studio-gallery refers to “yet another oil spill … soiling our nest.”

“That is my motivation – my family,” said Sinclair in a recent interview at her cozy studio-gallery space, The Sinclair Gallery. “I’m a mother and a grandmother, and it breaks my heart (to think of) what we’re leaving them.” Sinclair is referring to “the complete devastation created by our species as we power our way to control over our environment,” as she puts it in a brochure for her “Balance & Imbalance” series of mixed-media pieces.

Sinclair – who moved to Maine three years ago from Martha’s Vineyard – stood in the tiny center room of her studio-gallery, where the pieces that express her “political side” are located. (The front room of her gallery houses her more conventional pieces, such as bronze sculptures, a whimsical wire sculpture of a sheep, and six framed tree studies beautifully collaged from theater-gel plastic.) “Earth Nest” is located in the “political” area. So is “Arctic Methane,” a hanging sculpture fashioned from plastic-coated wire, copper, and other metals, depicting the melting of the Arctic permafrost and the resultant release of methane into the atmosphere. Methane, said Sinclair, “is much more toxic than CO2 in terms of destruction.” 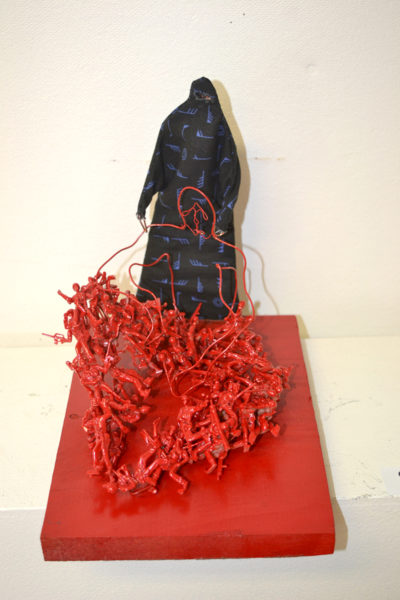 Sinclair motioned to “Migration,” a 3-D piece that is part of her “Adaptation” series, which evolved out of her “Balance & Imbalance” series. “How are we going to adapt to what’s coming down?” is the question posed by the “Adaptation” series, she said. “Migration,” with its tens of little wire stick figures seemingly moving about a sandy desert, depicts the plight of people forced to become refugees, both because of war and because of climate-change-induced issues, such as drought and famine. “Compassion” – in the same room – is a black-and-red sculpture of a woman clothed in a burqa expressing compassion for a number of soldiers that appear to be dead or dying.

Also in Sinclair’s “Adaptation” series is a mixed-media wall hanging called “Coywolf,” depicting the offspring of a coyote and a wolf. “They are totally adapted to urban living,” Sinclair said of coywolves. She seems fascinated by how the animal world adapts to change, how animals evolve over time. Plant survival techniques are equally interesting to her. “Kin Recognition” – featuring colorful upside-down metal flowers with a profusion of thin wire roots, suspended above a mirror – is “about plants recognizing kin,” Sinclair said. The roots of some plants “allow the same species space to grow – otherwise they try to overwhelm (the roots of) whatever the interloper is and kill it.”

As part of her ongoing immersion into the study of the environment, Sinclair recently began taking a 15-week environmental science class at University College at Rockland. “In my next life, I am going to be a scientist,” she said with a smile. 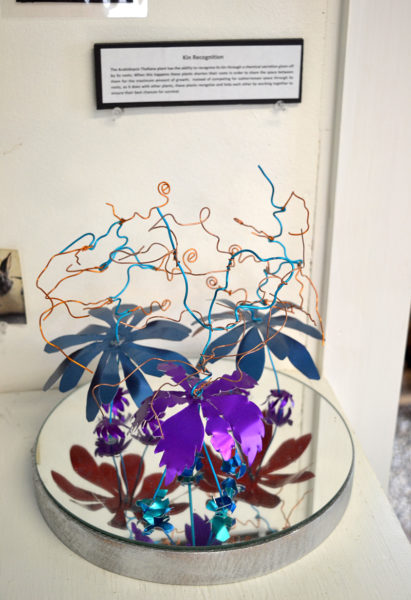 Sinclair has begun work on a new series that she has titled “Camouflage,” another take on the adaptation of beings to their environment. She is partway through the creation of a wire-and-cloth piece centered around the satanic leaf-tailed gecko, from Madagascar, whose camouflage capability is so remarkable as to make it virtually indistinguishable from the tree leaves upon which its sits. For this new series, Sinclair is adding a newly acquired skill to her bag of multimedia tricks: sewing. “I really am interested in trying to do things that are different,” she said, before adding, “And I’m a terrible sewer.”

“My concern is to wake people up with my art,” said Sinclair. “I am interested in having this (work) be educational, using art to talk about scientifically interesting information.” Along those lines, Sinclair, who is also a professional videographer, created a 13-minute-and-20-second video titled “Nature’s Spin Through Art” featuring widely known environmental activist Bill McKibben, founder of 350.org; George M. Woodwell, founder of the Woods Hole Research Center in Woods Hole, Mass.; and retired National Oceanic and Atmospheric Administration physicist Jerry T. Sullivan. It can be viewed at bit.ly/2cjHnEV.

Sinclair invites local teachers to schedule field trips to The Sinclair Gallery to learn more about her environmental art and the timely topics it deals with. Call her at 508-667-6475 to make arrangements.

The Sinclair Gallery is located at 172 Bristol Road, Damariscotta. It is open from 10 a.m. to 6 p.m. Wednesday-Sunday and by appointment. The gallery will be open from 4-7 p.m., Friday, Sept. 16 for the Damariscotta-Newcastle ArtWalk; it is stop No. 13 on the ArtWalk map.