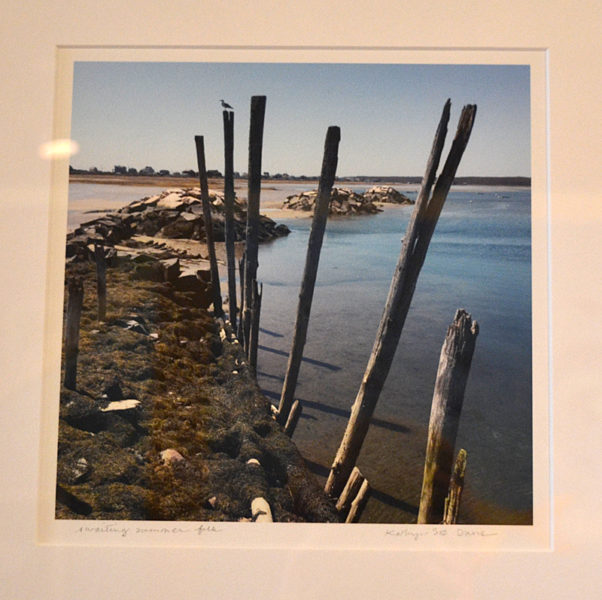 Just as summer is now a memory, the summer-evoking art exhibition of the photographs of Kathryn Simpson Bean Davis, of Kennebunk, and Portland’s Larry Hayden has come down from the walls of the Damariscotta River Grill as of Monday, Oct. 24.

It was a crisp 48 degrees and windy in downtown Damariscotta on the day before Davis and Hayden’s show was due to be taken down. Inside the restaurant, however, one could still bask in the warmth of summer memories by viewing such pieces as Hayden’s “The Spider Lily,” a close-up photograph of a graceful white spider lily in full bloom, or Davis’ “Lake Girl Happiness,” of a small green island with a lone tree on it in the center of a waterway. “Awaiting Summer Folk,” another Davis photograph, is a shoreline scene that includes one seabird standing atop an old wooden piling. One wondered who or what was doing the waiting for tourists. The bird? The land and water into which the ailing pilings were driven? All of them?

Hayden’s collection of photos of robust chickens sprinkled throughout the exhibit reminded one that winter is around the corner and chickens will have to huddle together for warmth, not stand alone and proud like the subject of “Big Blondie.” The fantastic, huge, wood-framed “Big Blondie” held court over the restaurant’s upstairs bar area. 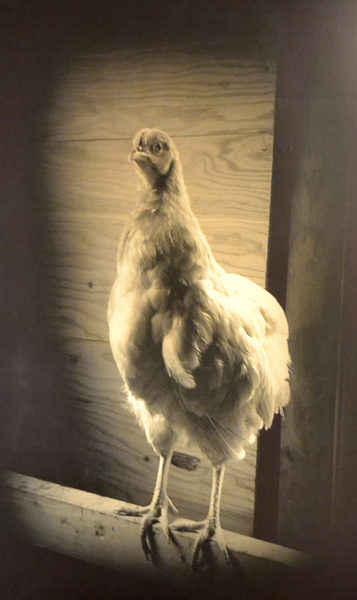 Similarly, “Bambi and Maxine with Sunflower” evoked the freedom and plenty of summer with its two fine hens joyfully eating seeds from the head of a still-green sunflower plant. “Blondie and Buddy,” of a sweet-eyed young chicken standing next to a large hen that we assume is his mother, equally evoked the happiness and warmth of summer.

Davis had a number of lovely flower photographs in this show, as well as some almost-too-cute ones of little frogs. “Portrait,” of a large and a much smaller tulip, was simple and striking. “Subtle Memory” depicted the light-green center of a delicate white flower in close-up. “Illumination” presented an upside-down flower looking very much like a ballet dancer in a graceful tutu.

On the stairs leading up to the bar hung Hayden’s pretty “Bleeding Heart, After the Rain,” a large framed photo not of flowers, but of the leaves of a bleeding heart plant coated with large, glistening drops of water. Upstairs, Davis’ “Orange, La Napoule” decidedly made one think of summer with its bright-orange clementine the center of attention.

Not all of the photographs in the show were directly related to warm weather, such as Davis’ “Detail, La Napoule,” a up-close shot of old wooden scrollwork like that on a staircase, and Hayden’s “The Studio Window,” a dramatic nighttime photo printed on metal of a single lit window in a small building casting light onto the snow outside.

But enough of them reminded one of summer that it is a little sad to see the show go. However, the Damariscotta River Grill, which is located at 155 Main St. in Damariscotta, has not missed a beat as far as its ongoing Art at the Grill series goes. It is currently hosting an exhibit featuring the work of acrylic landscape painter Diane Noble, animal-focused painter Gay Freeborn, and Douglas Houle, who paints dramatic pieces featuring New England buildings, through Tuesday, Dec. 6. 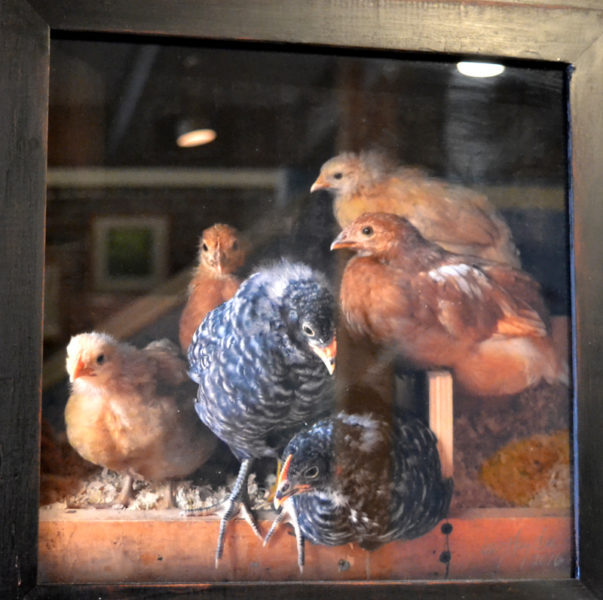