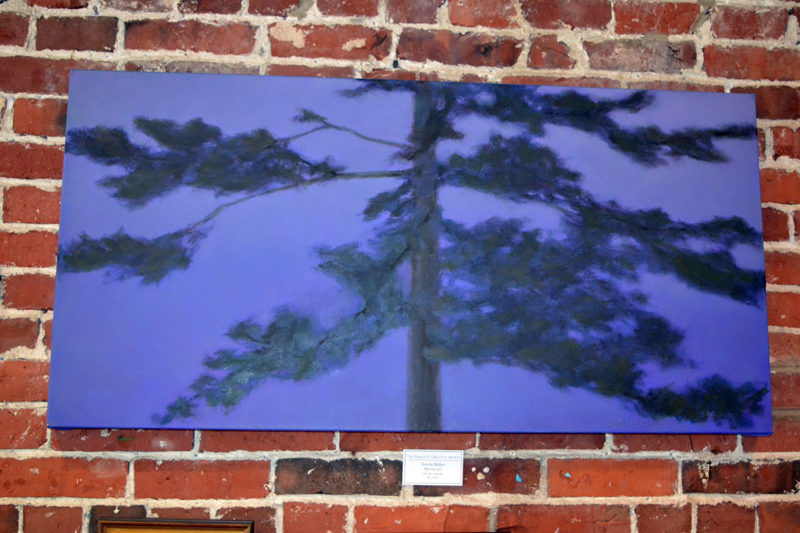 Beverly Walker’s large oil painting titled “Midnight” is one of numerous landscape paintings on display at the Damariscotta River Grill as part of the Pemaquid Group of Artists’ show running through Tuesday, March 21. (Christine LaPado-Breglia photo)

One of the nice things about taking in an art show at the Damariscotta River Grill in downtown Damariscotta is that the two-story restaurant has a lot of wall space on which to display a lot of art.

Another plus is that the quality of the artwork displayed is reliably top-notch. This is certainly the case with the current exhibit by the Pemaquid Group of Artists.

The Pemaquid Group of Artists, for those unfamiliar with it, is the group of 30 well-known local artists that show their artwork from June through October at the Pemaquid Art Gallery at Pemaquid Point Lighthouse Park. 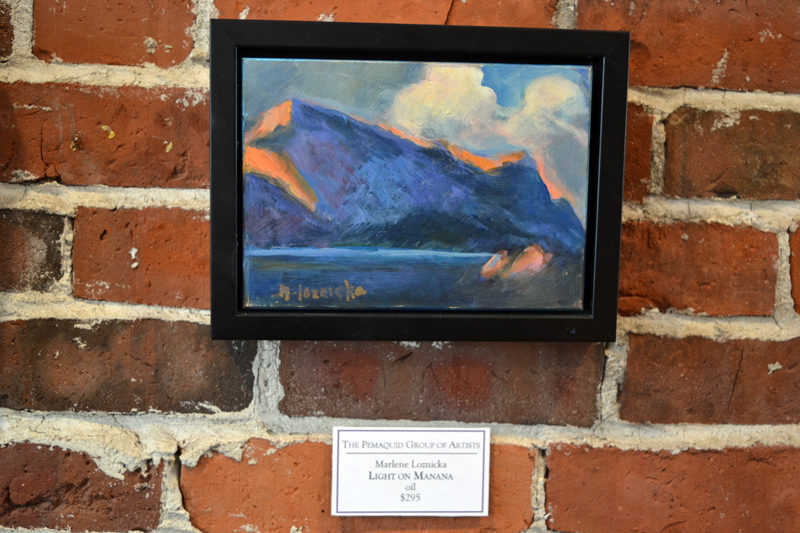 Hannah’s “Saltwater Farm in Winter,” a typically Maine scene of a building sitting alongside a river and backed by densely vegetated hills, hangs upstairs. Nearby hangs Julie Babb’s gouache “American Redstart,” of a bird sitting on a branch. Babb, who is on the Pemaquid Art Gallery board, is known for her finely detailed gouaches of local birdlife.

Thelander weighs in with several pieces, including “Treasures,” an oil painting featuring an assortment of items in a jewelry tray inside an open suitcase, including a piece of bone and a bell. Fans of Thelander’s work will surely appreciate the detail she put into this piece.

Beverly Walker’s striking, large oil-on-canvas called “Midnight,” a close-up of a tree in dark green against a deep-purple sky, graces the brick wall across from the restaurant’s bar area.

Damariscotta watercolorist Jan Kilburn, whose gallery is part of the Bristol Road Galleries group of four galleries, offers a number of pieces in this show, including the large watercolor “Peggy’s Cove, N. S.,” of a peaceful landscape scene in Nova Scotia. The streaky sky in this piece, as in all of Kilburn’s landscape paintings, is quintessential Kilburn – lovely and variegated in color.

Some of the pieces in the current show will be familiar to visitors to the Pemaquid Art Gallery last summer, such as Paul Sherman’s large watercolor painting “Pemaquid Light Bell House.” Sherman’s style is unique; he favors pastel colors and takes a mosaic-like approach to representing his subjects. Thelander’s “Screened Bottles” was also on exhibit at last summer’s show.

There is much to see at this show, and landscapes dominate the subject matter. But one should not leave the building without taking a good look at Claire Hancock’s meticulously detailed pastel still-life pieces “Spring Fresh” and “Daisy Delight” hanging downstairs near the restaurant’s front windows.