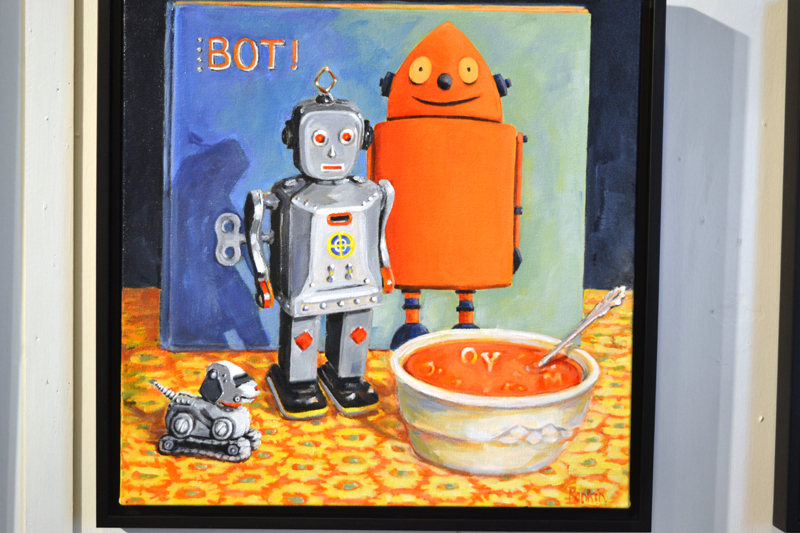 “Robot Lunch,” one of the acrylic paintings in Denise Rankin’s “Robots” series on exhibit at The Stable Gallery in Damariscotta through mid-September. (Christine LaPado-Breglia photo)

Damariscotta artist Denise Rankin’s work is nothing if not fine. The painter and Shaker basket maker excels in both of her chosen mediums. Luckily for art lovers, Rankin’s whimsical, carefully crafted paintings and equally painstakingly crafted Shaker boxes and trays are on exhibit at The Stable Gallery in Damariscotta through mid-September.

Two paintings from Rankin’s “Advice Your Mother Gave You” series – which Rankin fans are familiar with, perhaps most recently from her show at Damariscotta River Grill last year – are in the current show. “Grin and bear it” features those exact words of advice in typewriter-like font below a depiction of a mother and a baby bear. The little bear is standing up, looking like it might be about to do something playful, even mischievous. “Eat your crusts if you want curly hair” is an endearing depiction of a dog with its paws reaching up to a kitchen counter and eyeing a pile of delicious-looking sandwiches on a plate. We understand that the dog would certainly love to eat those sandwiches, crusts and all – no mother would have to tell him twice! Rankin’s play on this bit of motherly advice is a delightful twist. Her choice of yellow for the background works well to set off the colors in the sandwiches, and also evokes the sense of “kitchen,” yellow being an oft-used color for kitchen walls. 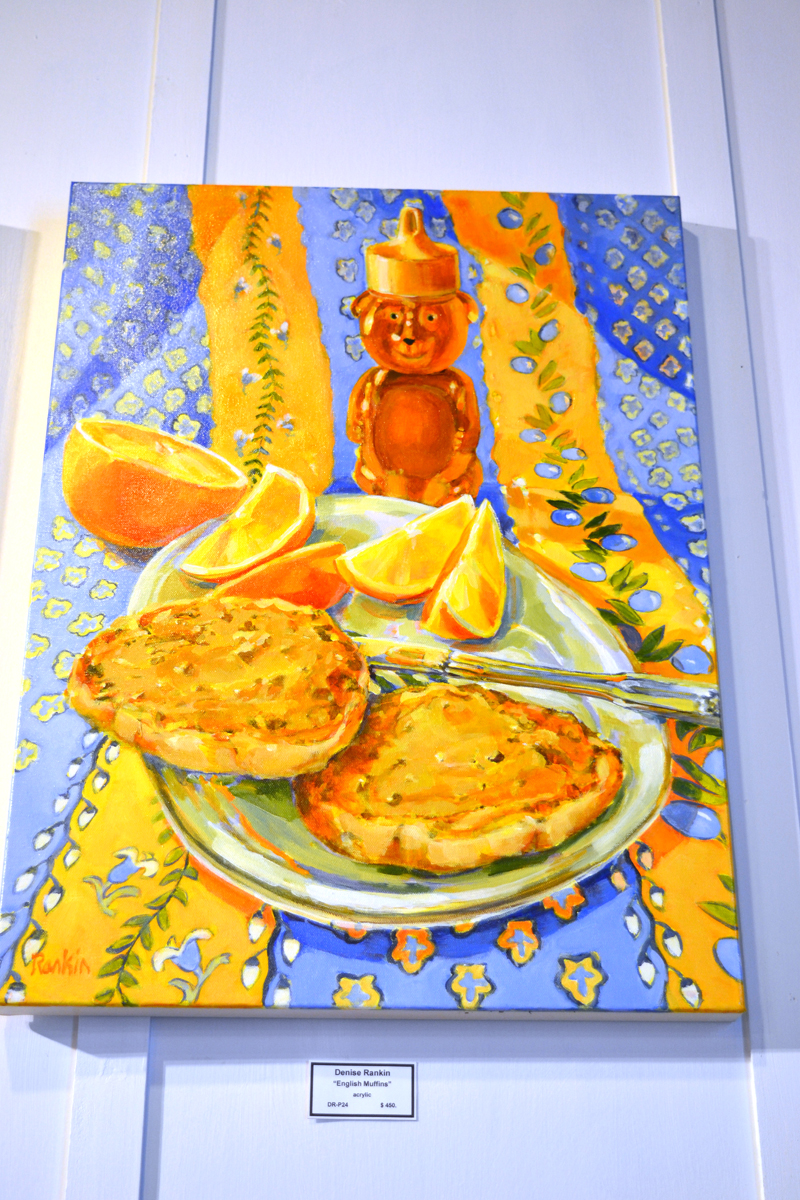 Rankin’s newer “Robots” series is sheer pleasure to take in. “Sometimes I Forget You’re A Robot” pictures a wind-up toy robot standing before a children’s book with the same title as the painting. A simply drawn robot is pictured on the book’s cover, contrasting with the detail of the robot standing before it. Letter blocks, a sharp dart, and a nut (as in nuts and bolts) litter the area around the “real” robot. The primary colors – red, blue, yellow – give this playful painting a distinctly child-like appeal, an appeal that extends easily to adult viewers.

In “Big Bad Robot,” a slightly more imposing toy robot than in “Sometimes I Forget You’re A Robot” stands before yet another kids book, this one with a partially obscured title. We can make out the words “Three Little Aliens” on the book’s cover. A theater-style box of popcorn, some of it spilled, also appears in this colorful painting. Rankin manages to capture the joys of toys, books, movies, and childhood in this one piece. 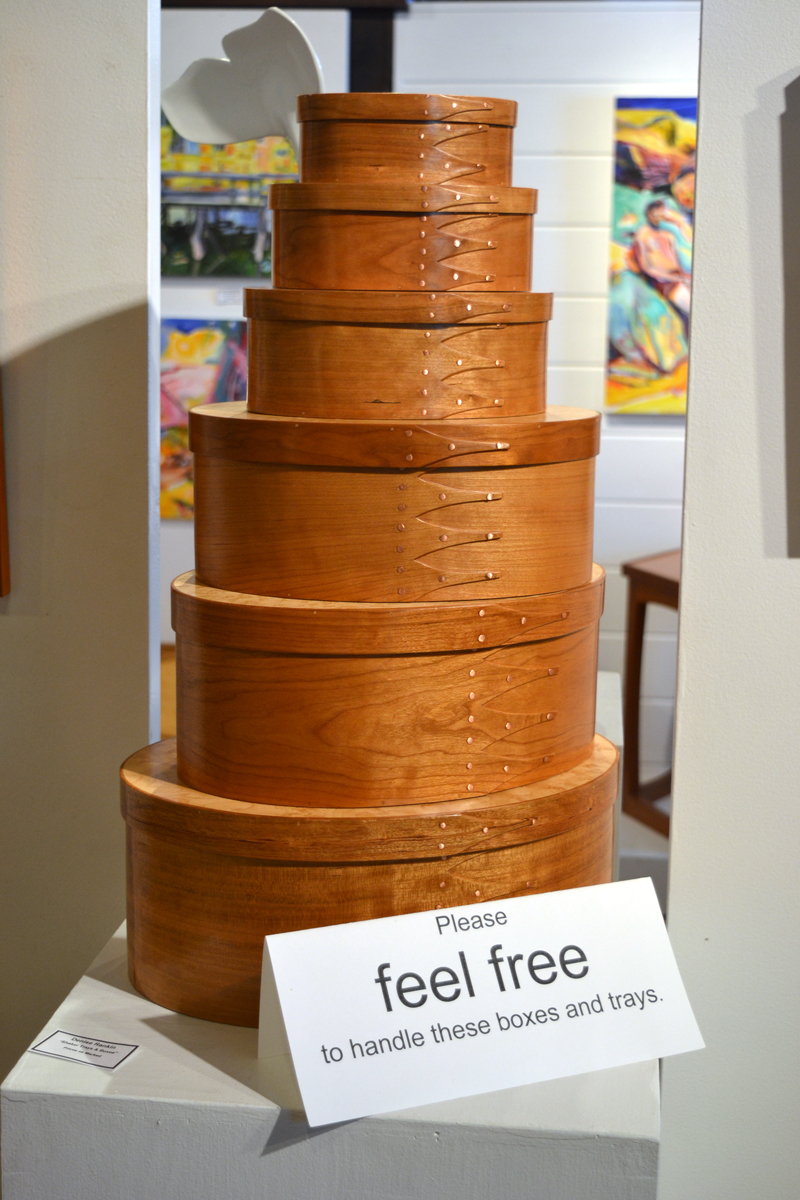 “Robot Lunch” and “Oy, Robot” round out Rankin’s “Robots” series pieces in this show. The book in the background of “Oy, Robot” is called “The Robot,” spelled out in “robot parts,” such as a spring and two nuts for the “B” and a toothed gear for the “O.” Atomic Fireball candies and two letter blocks spelling “OY” round out this painting that would be a decidedly fun addition to a child’s bedroom or playroom. “Robot Lunch” continues the “OY” theme; the word is spelled out in pasta letters in the alphabet soup pictured. In this painting, a toy robot and a robot dog stand on a detailed flowered tablecloth before a book titled “Bot!” featuring an adorable red robot standing at friendly attention. It, like the other “Robots” paintings, shows Rankin’s well-known playful side at its best, as well as her attention to detail.

Rankin’s paintings of food items – “Blueberries,” “Bacon and Eggs,” and “English Muffins” – are beautifully painted. The honey-bear containers pictured in “Blueberries” and “English Muffins” take on a happy spark of life similar to that imparted in the robots of the “Robots” series. Rankin is a master of realistic representation that captures a deeper layer of meaning. In the case of the robots and honey bears, it is as if she has remained connected to the way a child sees the beauty and joy – and inner life – of everything in the world, including inanimate objects.

Rankin’s traditionally crafted wooden Shaker boxes and trays are meticulously made, sleek, and elegant. Having learned her craft at the Fletcher Farm School for the Arts & Crafts in Vermont, Rankin offers copper-riveted oval boxes and trays that are gorgeous in their simplicity of form and that defy the viewer to imagine how they could be any more perfect. One marvels that she can bend and form wood in such a beautiful-yet-functional way. Rankin even invites the viewer to touch her Shaker-inspired work, adding an extra layer of sensuousness to the viewing experience.

The Stable Gallery is located at 36 Water St., Damariscotta. The gallery is open daily from 10 a.m. to 5 p.m.