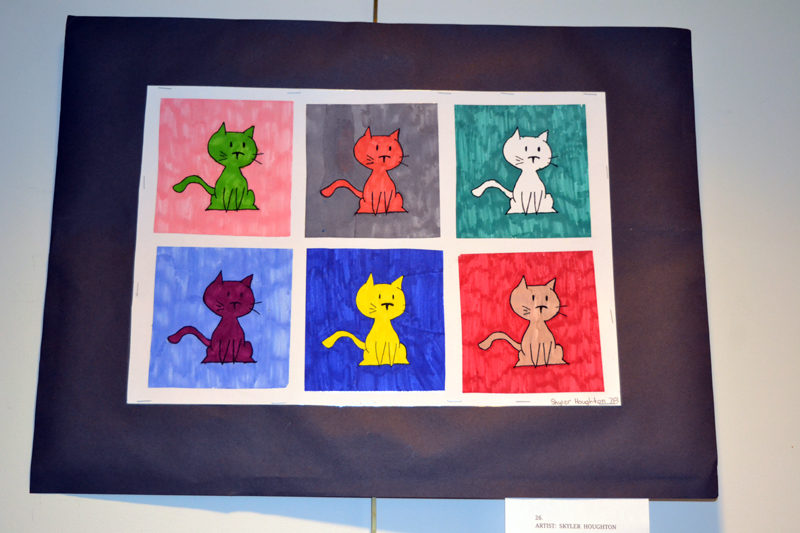 The Carey Gallery at Skidompha Public Library can be counted on for hosting excellent art shows – and the current show on its walls is no exception. The exhibit, which runs through Tuesday, Feb. 28, features the artwork of a number of seventh- and eighth-graders attending Great Salt Bay Community School in Damariscotta.

GSB art teacher Karen Hight is the organizer of this delightful show that includes everything from pencil drawings to paintings made with tempera paint and watercolors to brightly colored pop-art pieces created using markers. One piece, sitting just inside the Elm Street entrance to the library, is a large yellow chicken made of cardboard with an orange beak. This eye-catcher was made by Andrew Nery.

Both Julia Palmer and Emma Lehouillier chose to use colored pencils for their drawings of popular characters from Disney movies. Palmer’s drawing titled “Belle,” of Belle and the beast of “Beauty and the Beast” fame, is well-executed, as is Lehouillier’s “Stitch,” of the adorable, rascally blue character from the 2002 film “Lilo & Stitch.” Near Palmer’s and Lehouillier’s drawings hangs Audrey Perce’s lovely anime-style colored-pencil portrait of a wide-eyed girl with blue-and-brown hair wearing a bright-fuchsia bow on one side of her head. 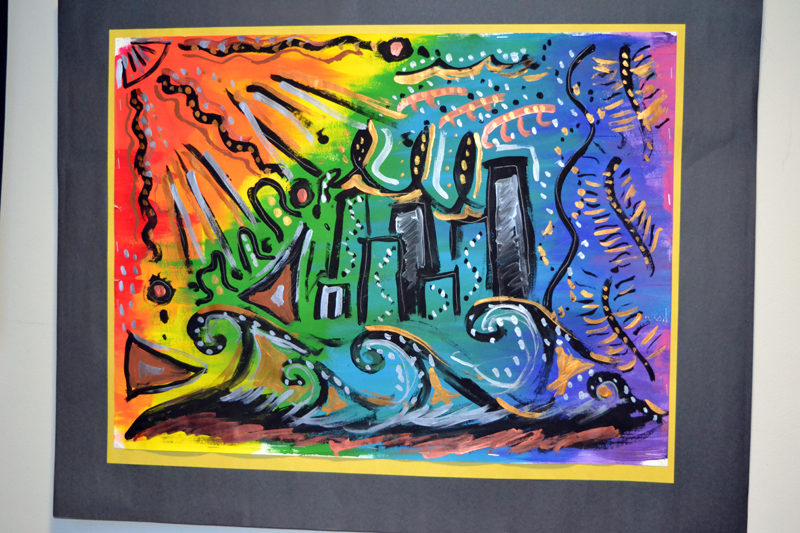 Lizzy Ober’s large colored-pencil piece titled “I Have a Dream” features a black-and-white zippered heart superimposed on a drawing of the Earth. Martin Luther King Jr.’s famous “I have a dream” quote runs around the edge of the world in this thought-provoking piece.

Two of the students with art in this show, Marina McManus and Honora Boothby, are also actively involved with the new GSB Online Gallery of Arts and Literature, designed for artists of all mediums at GSB to have a venue for their creative work. Boothby’s black-ink-on-paper piece depicting a stylized cat with a scaly, dragon-like body is quite intriguing, in part for its portrayal of the cat as if in a photographic negative. McManus weighs in with “Islamic Pattern,” a quilt-like, collaged construction-paper piece in red, orange, and yellow.

One GSB student, Theo Crocetti, created a lovely small linoprint in blue of a puffin in flight.

Sunny Cummings’ untitled tempera-paint work in all the colors of the rainbow is the largest work in this show. The piece depicts a cityscape and is arguably the most striking piece in this thoroughly engaging show.

Some of the pieces in the GSB art show are for sale. “There are prices on some works of art as part of a fundraiser for a Great Salt Bay student who has been ill, to help with medical bills,” a flier accompanying the exhibit states. Those interested in purchasing a piece are asked to email Hight at khight@aos93.org.