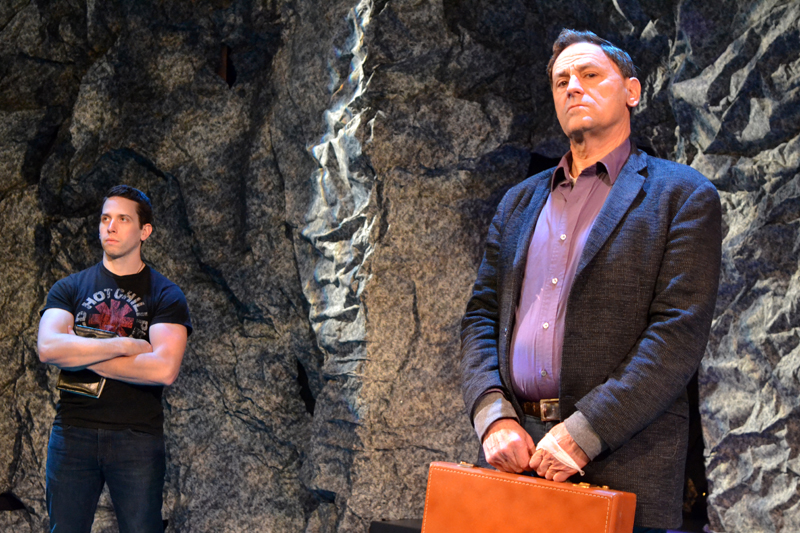 The 2003 play “Eurydice,” written by prominent New York City playwright Sarah Ruhl, is – as New York Times reviewer Charles Isherwood put it – a “devastatingly lovely” modern take on the myth of Orpheus, only from the point of view of his wife, Eurydice. Heartwood Regional Theater Company’s upcoming production of “Eurydice,” opening Thursday, April 27 at Lincoln Academy’s Parker B. Poe Theater, does great justice to Ruhl’s lovely, moving work about love, death, memory, and the power of language.

Just prior to an April 20 run-through at Poe Theater, director Griff Braley reminded the seven-person cast of “the love of words in our play – that’s absolutely essential.” The actors, he reiterated, must at all times “be digging for the beauty of those words.” Nashville-based actors Gina D’Arco, who plays Eurydice, and Austin Olive, who plays Orpheus, listened intently to Braley’s words before launching into the playful opening beach scene between Orpheus and Eurydice.

“All those birds?” asks Eurydice. Orpheus nods and Eurydice responds, “For me? Thank you.”

Orpheus next gives Eurydice the sea. “It’s mine already? Wow!” she says.

D’Arco’s bubbly-yet-intense portrayal of Eurydice is already apparent in this opening scene, and D’Arco only goes up from there. 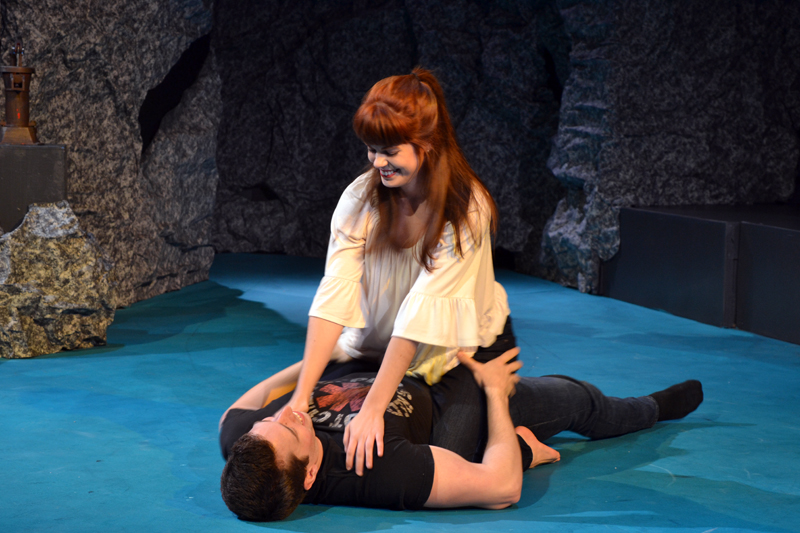 Nashville-based actor Gina D’Arco, as Eurydice, sits astride Austin Olive, who plays Orpheus, in a scene from Heartwood Regional Theater Company’s “Eurydice” at an April 20 run-through of the play at the Parker B. Poe Theater. (Christine LaPado-Breglia photo)

Clifford Blake, as Eurydice’s father, enters next. Blake, who is playing the role of the father for the second time in his acting career, delivers nicely as a man who has died but cultivates a poignant relationship with his beloved daughter. His acted-out fantasy of walking Eurydice down the aisle to be married, for one, is touching.

Local actors Thalia Eddyblouin, Mary Boothby, and Joe Lugosch star as the quirky underworld trio of Stones – Loud Stone, Little Stone, and Big Stone, respectively. They lurk in the background, yet remain in the audience’s awareness, partly due to the ongoing bits of advice they give sternly to the dead. “Speak in the language of stones!” they admonish Eurydice at one point.

Eurydice and Orpheus’ love affair – through life and death – is pleasingly punctuated by Orpheus’ letters and music. The two enter one scene dancing and singing to the catchy, well-known 1940s song, “Don’t Sit Under the Apple Tree (with Anyone Else but Me).” The gaiety of such scenes serve as a balance to the seriousness of other scenes. 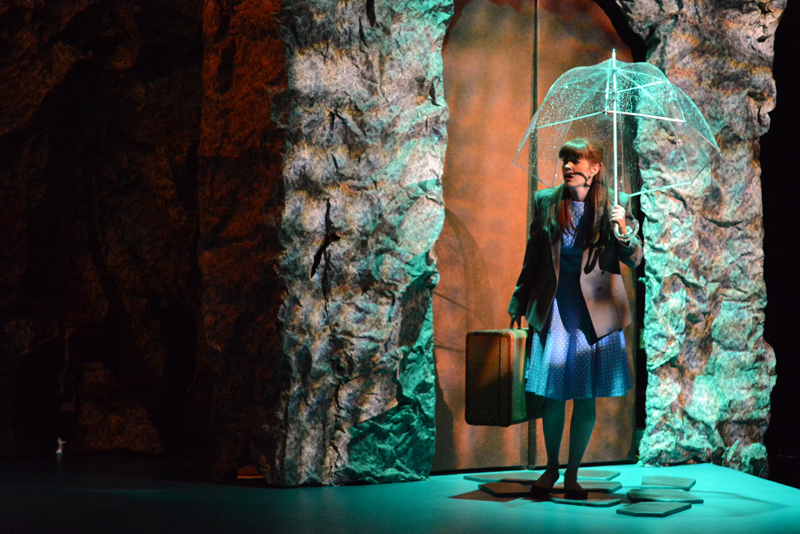 Steve Shema is a standout in this production of “Eurydice.” The Iceland-based actor is brilliant in the dual role of Nasty Interesting Man and Child of Hades. As the former, he is appropriately creepy when he invites a still-living Eurydice to his apartment to see a note from her dead father. In the latter role, he is a scene-stealer, riding onto the stage on a red tricycle, wearing red shoes and goggles, shouting “I’m the Lord of the Underworld!”

The set design for “Eurydice” is spare, and beautiful when beauty is called for, such as when Eurydice arrives in the underworld via rainy elevator, carrying a see-through umbrella. The effect of using real water for this scene is excellent. Also visually lovely is the scene in which Eurydice’s father erects a tent of sorts from string and the umbrella.

Lighting, it must be added, is expertly used throughout the play, setting moods appropriately.

Play-goers can expect a decidedly modern, thought-provoking – but not overly cerebral – piece of theater in “Eurydice,” both visually and content-wise. Heartwood has done an admirable job of bringing this gem to the stage.

“Eurydice” will run Thursday-Sunday, April 27-30 and Thursday-Saturday, May 4-6 at the Parker B. Poe Theater at Lincoln Academy, 81 Academy Hill Road, Newcastle. All shows will begin at 7:30 p.m. except the April 30 show, which will start at 3 p.m. Student tickets are $5 and adult tickets are $25 for all shows except the May 4 show, which costs $20 for adults. Go to heartwoodtheater.org for more information.