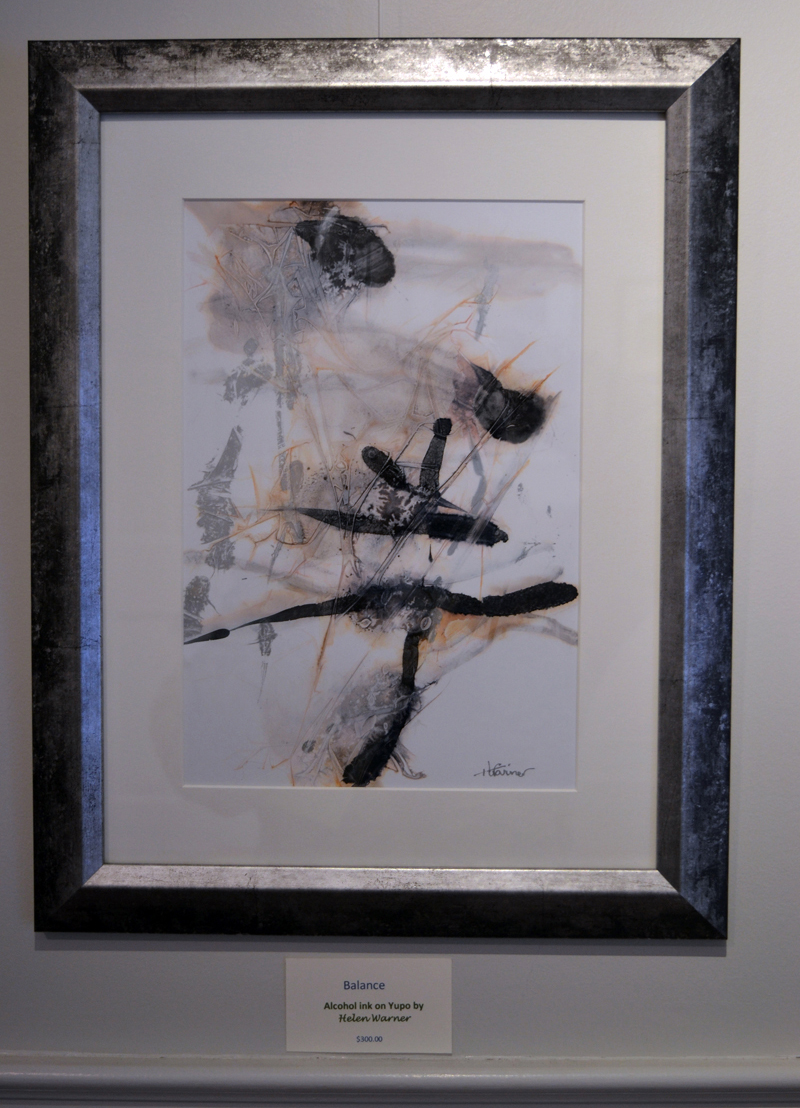 For 40-plus years, Newcastle painter Helen Warner largely devoted herself to a nursing career. Retirement afforded her the time to focus on her watercolor and oil painting. Her nature-focused oils and watercolors were the subject of a summer 2016 exhibit at the Pemaquid Watershed Association office-gallery in Damariscotta.

Now, Warner returns to PWA with her “Nature’s Palette” show, a lively nature-centered collection of artwork featuring her fine watercolors and oils, as well as a welcome new addition to her artistic bag of tricks – pieces created using alcohol ink on Yupo paper, a waterproof synthetic paper notable for its glossy surface. (Contrary to what one might think, ink adheres well to the shiny surface.)

The PWA conference room is where Warner’s oil paintings hang. “Morning Light on Manana” is a fairly large oil-on-canvas piece that beautifully captures the early-morning sunshine in warm orange as it shines onto the island’s rocky cliff. Similarly, “Falling Tide,” another sizable painting, offers a lovely, realistic vision of a tidal inlet as it tapers to a vanishing point near the bottom of the piece. Warner’s deft use of blues, greens, and a smattering of orange-brown and rock gray make for very pleasant viewing.

A number of Warner’s oil paintings depict pounding surf. Some are of trees and flowers. One, “Lupine Fantasy,” an oil painting on linen board, is a little more on the abstract side compared to her other oil paintings.

Warner dives into gorgeous abstraction in her Yupo pieces. She employs black and gray ink for “Summer Storm,” “Balance,” and “Here Kitty, Kitty” – all seemingly inspired by Asian art. The latter is particularly interesting, as it appears that the piece was created rather randomly and only later did Warner “see” a cat in the piece, adding whiskers to draw out the image.

Four small square ink-on-Yupo pieces sit above the window in the PWA’s so-called “middle room”: “Earth, Fire and Sky,” “Sundance,” “Neptune’s Garden,” and “Under the Wave.” All four pieces are colorful abstracts – the first two in red tones, the latter two in blues and greens.

“Lost in the Woods” is a stunning Yupo piece, a colorful abstract take on a forest. “Apple Orchard” is equally lovely and, because it is framed without glass, shows off the Yupo glossiness to full effect. 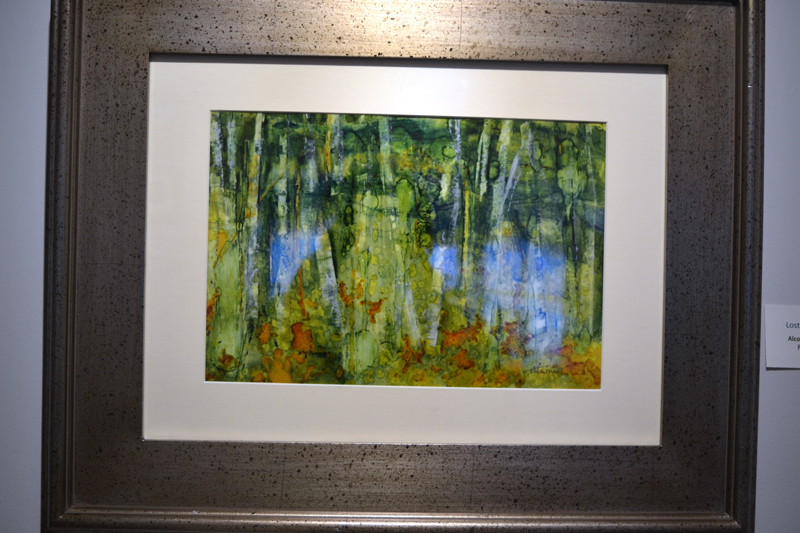 As Warner gets less realistic in her new approach, it seems she somehow is gaining more control over her images, even as they may surprise her occasionally as the alcohol ink interacts with the Yupo paper. Her watercolors seem to be developing similarly. While she clearly has the ability to paint utterly realistic-looking sails, she is also showing a talented hand in extracting just the right amount of detail to portray, say, a sail or a mast.

One would be well-advised to take an hour or so out of one’s day to spend time taking in Warner’s excellent show, which – perhaps refreshingly for some at this point – features no snow depictions whatsoever!

“Nature’s Palette” runs through Friday, Feb. 2 at the PWA office-gallery, 584 Main St., Damariscotta. The office-gallery is open Monday-Friday from 9 a.m. to 4 p.m. Call 563-2196 for additional information.