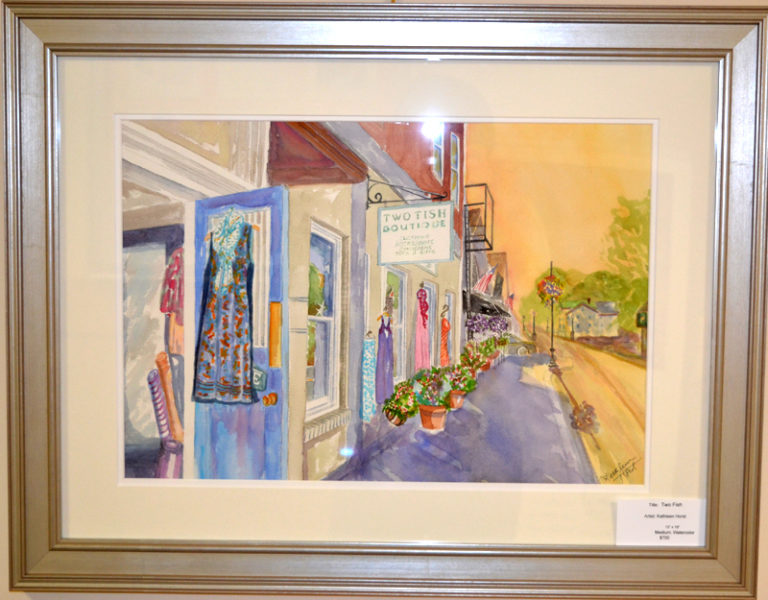 Damariscotta watercolorist Kathleen Horst’s appealing art exhibit titled “Painting Damariscotta and the Midcoast” gives one a good reason to visit the local hospital without being sick or visiting someone who is sick. The sizable show, which runs through Thursday, Sept. 8, is on display in the Hall Gallery in the main hallway of LincolnHealth – Miles Campus, at 35 Miles St., Damariscotta.

Horst, who specializes in painting watercolor portraits of houses and cottages, has branched out into creating paintings of the iconic businesses in downtown Damariscotta, such as Waltz Soda Fountain and King Eider’s Pub, and Midcoast destinations “beloved for gorgeous landscapes,” as her artist’s statement puts it. The former Georgia resident, who summered in Maine with her husband for more than 20 years before becoming a full-time resident of Damariscotta two years ago, opened the Kathleen Horst Studio Gallery in Damariscotta last summer. 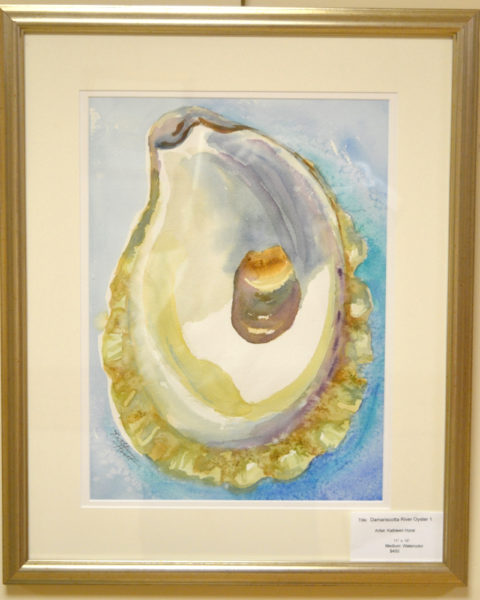 An avid gardener, Horst writes that her “second love is architecture.” She brings both together in her watercolor homages to beautiful buildings and the flora that often grows close to them, as in her commissioned house portraits.

“The Grill” is a painting of the front of the Damariscotta River Grill on Damariscotta’s Main Street. It features the two large pots of purple and red flowers with green leaves that passersby know so well, a blackboard sandwich board inviting people into the restaurant for a summer drink, and the subtle reflection in the restaurant’s front window of yet another iconic old building across the street.

Damariscotta’s Two Fish boutique gets similar attention. In “Two Fish,” Horst captures the beauty of the shop’s exterior – including the dresses hanging outside on hangers and the potted flowers – with her gentle use of color.

“Stars” – of the front of Stars Fine Jewelry and Gifts – portrays the “Maineness” of the store, with its American flag flying out front and pots of colorful flowers, both hanging and placed on the ground near the front door. The reflection of S. Fernald’s Country Store is captured in Stars’ window. A section of the multistory red-brick building next door to Stars is nicely visible. Horst, it should be noted, has a knack for capturing the “brickness” of bricks very subtly, without marking actual lines between the bricks.

Horst’s non-building paintings are just as pleasing to the eye. “Skidompha’s Garden Gate,” for instance, is an inviting painting of the slightly ornate black metal gate and shady garden adjoining Skidompha Public Library. A little sign on the gate reads “Welcome.” In “Round Pond Dinghies,” water and wooden boats make up a typical Maine coastal scene. “Fishing Heaven,” hanging next to the restrooms, pictures three small cottages near a rocky shoreline.

Around the corner from the paintings in the hospital’s main hallway hang a number of others that are also not focused on buildings, such as three small paintings in a row – of lupines, a water lily, and blueberries. Directly across the way from them hang three large paintings: “Rhododendrons,” “Lupines,” and “Damariscotta River Oyster 1,” of the inside of an oyster. A lovely “sister” painting to “Damariscotta River Oyster 1,” of the exterior of an oyster shell, hangs in Horst’s Bristol Road gallery.

Horst’s LincolnHealth show makes for some pleasant perusing. She has even more paintings to take in at her studio-gallery space, located at 179 Bristol Road, Damariscotta. The Kathleen Horst Studio Gallery is open afternoons by chance or by appointment, and it will be open from 4-7 p.m., Friday, Sept. 16 and Friday, Oct. 21 during the final two Damariscotta-Newcastle ArtWalks of 2016. Contact Horst at 478-550-8372 or kathleenmhorst@gmail.com for more information. To learn more about Horst’s house portraits, go to houseportraitsbykathleen.com.