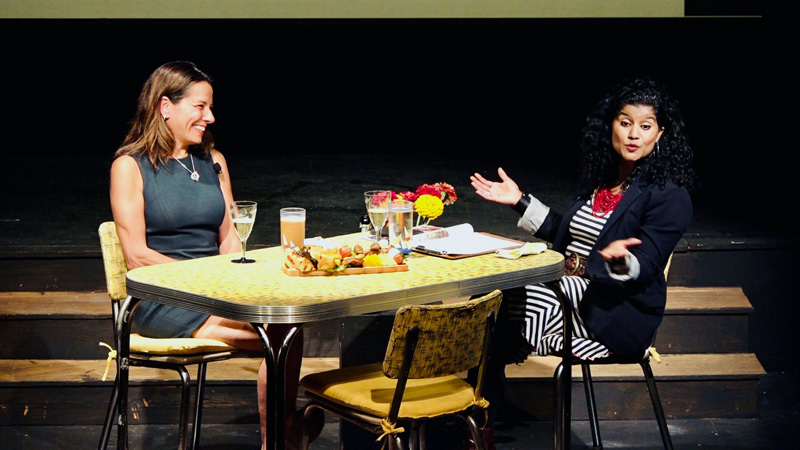 On the rainy evening of Thursday, Sept. 26, the eager audience that came out to take in the inaugural Talking Food in Maine: Intimate Conversations event featuring famous chef Melissa Kelly was told that Kelly was running late. Her plane out of New York City had been delayed and – jokes aside — she was still driving through Wiscasset at 7:08 p.m.

The event, part of a new series the theater is offering to the public for free, had been scheduled to start at 7 p.m.

No matter. No one left. Everyone stayed for what turned out to be a 7:24 start time, when Lincoln Theater Executive Director Andrew Fenniman announced that Kelly was in the house.

Appropriately swanky intro music played as Kelly and host Cherie Scott hit the stage and took their seats at the intimate table and chairs set up for the live interview.

A few nervous jitters were apparent from both Scott and Kelly as they began to chat, likely due to the fact that Kelly had been delayed and this was Scott’s very first time out of the gate as the host of this live series. But it was hard to argue with Scott when she noted that “if there was anyone that was worth the wait,” it was Kelly.

Kelly, for those who are not familiar with her work (and fame), is the owner-chef of Primo restaurant in Rockland and the recipient of an unprecedented two James Beard Best Chef, Northeast awards. Her distinguished resume includes working for widely celebrated chef Larry Forgione at An American Place in New York City and working for trailblazing farm-to-table chef Alice Waters at Chez Panisse in Berkeley, Calif.

Kelly is a female trailblazer herself in the world of food, having been, among other things, the only female to graduate (and with highest honors) in her class at the Culinary Institute of America.

Scott and Kelly warmed up with a discussion about Primo’s collaboration on a chocolate bar, the 20 Karat Bar, with fellow Rockland business Bixby & Co., known for its gourmet Maine-made chocolate bars. The 20 Karat Bar features organic cocoa beans and cane sugar, as well as almonds, salt, and rosemary.

One might also find a “gold certificate” in the bars redeemable for a gift from Primo, along the lines of the Golden Tickets of “Willy Wonka & the Chocolate Factory” fame. As Kelly told Scott, “I was in love with ‘Willy Wonka’ growing up.” (Note: There is one more gold certificate yet to be found. One can buy 20 Karat Bars at Primo, Good Tern Co-op in Rockland, as well as at locations in Portland and Camden and online at bixbyco.com.)

Scott chatted with Kelly about her days growing up on Long Island and the time she spent in her grandmother’s kitchen. “It’s changed so much,” said Kelly of Long Island, “from farms, to tension … traffic.”

Kelly emphasized that she was “super fortunate to grow up across the street from my grandparents.” She said that because her grandparents ate dinner earlier than her own family, she “could choose which dinner” she wanted to eat on any given night.

Kelly’s grandmother “was a great cook,” she said, and while Kelly’s mother “is a good cook also … I cooked more with my grandmother than with my mom.” 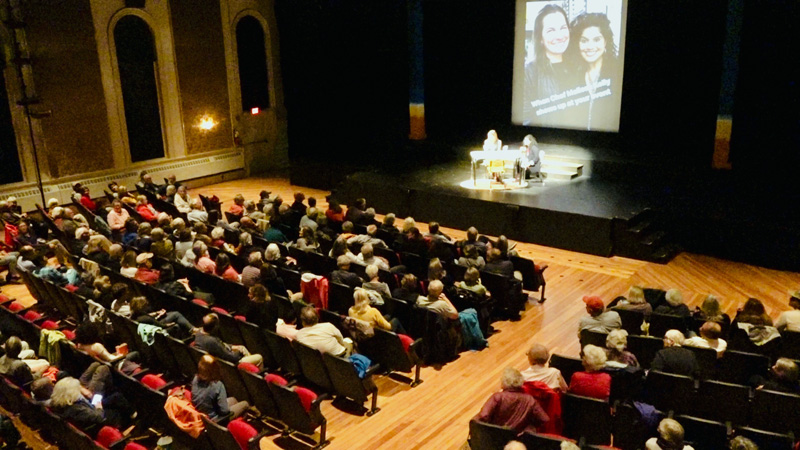 Kelly told a funny story about the first time her then-boyfriend, from New York, came to visit after she and her family moved to Bangor, where her father worked at United Airlines. The two of them went to dinner at what turned out to be an empty restaurant in Bangor and her boyfriend wanted lobster because he was in Maine. “They sat us at a table for 12 facing the bar, with ‘Death of a Salesman’ on a giant TV screen,” and the waitress dusted off the menus before handing them out, Kelly said.

“We wanted a drink but we got a bowl of peaches with powdered sugar. That was our ‘amuse-bouche’,” Kelly said, to chuckles from the attentive audience.

Kelly’s “Flintstones-size prime rib,” as she put it, was matched in oddness by her partner’s lobster dinner – pieces of lobster served “under a cheese dome.”

It was delightful stories like this that made one understand why Kelly might have seen a need to bring finer dining to Maine.

Scott, to her credit, had obviously done her research on Kelly before interviewing her; she knew her resume in great detail as well as other tidbits about Kelly’s life, such as the 20 Karat Bar collaboration. Also notable is Scott’s pleasant, cheery manner and her obvious enthusiasm for the world of cooking and food. This came as no surprise as Scott, of Boothbay, is the host of the six-part food-centric television series “Mumbai to Maine,” currently in development, and hosts the food-focused blog of the same, at mumbaitomaine.com.

Kelly told a number of stories about the sexism and related inappropriate behavior she had to deal with in the various restaurants she worked in while “coming up,” beginning with having to knee “Jimmy the pizza cook” in the crotch when she was 15 years old and had been accosted by him in the bathroom.

She also spoke of the discipline and attention to detail she learned from accomplished chefs along the way. Hartmut Handke, her boss at The Greenbrier in White Sulphur Springs, W. Va.,  was one of those formative presences early on, for instance: “If your knife wasn’t sharp, it went in the garbage. He was a very disciplined chef.”

Lest one wonder if Kelly is elitist in her approach – in any way other than her desire to feed her customers the most delicious, expertly prepared, locally sourced, and freshest food available – Scott made the point that Kelly has “created a space (at Primo) where a lobsterman could dine alongside a Rockefeller,” referring to Primo’s upstairs room with a bar that offers 65 unreserved seats every night.

By the end of the evening, it was obvious to anyone paying attention (and we all were) that, awards, accolades, and high-level connections and recommendations (such as from the late Anthony Bourdain) aside, what drives Kelly to do the hard work she and her crew do every day is her desire to work hard, do a good job, and make people happy.

“It means something (to get awards),” she said, “but what’s more important is what you do every day. I teach my cooks that. You get an award, but the next day you’re scrubbing pots … I am in the business of making people happy.”

Lincoln Theater’s free Talking Food in Maine series continues at 7 p.m. on Thursday, Oct. 24, when Scott will interview Kerry Altiero, the owner of Rockland’s Cafe Miranda and the winner of HospitalityMaine’s 2019 Chef of the Year award.

Lincoln Theater is located at 2 Theater St., Damariscotta, and is online at lcct.org.

Primo is located at 2 Main St., Rockland, and is online at primorestaurant.com.