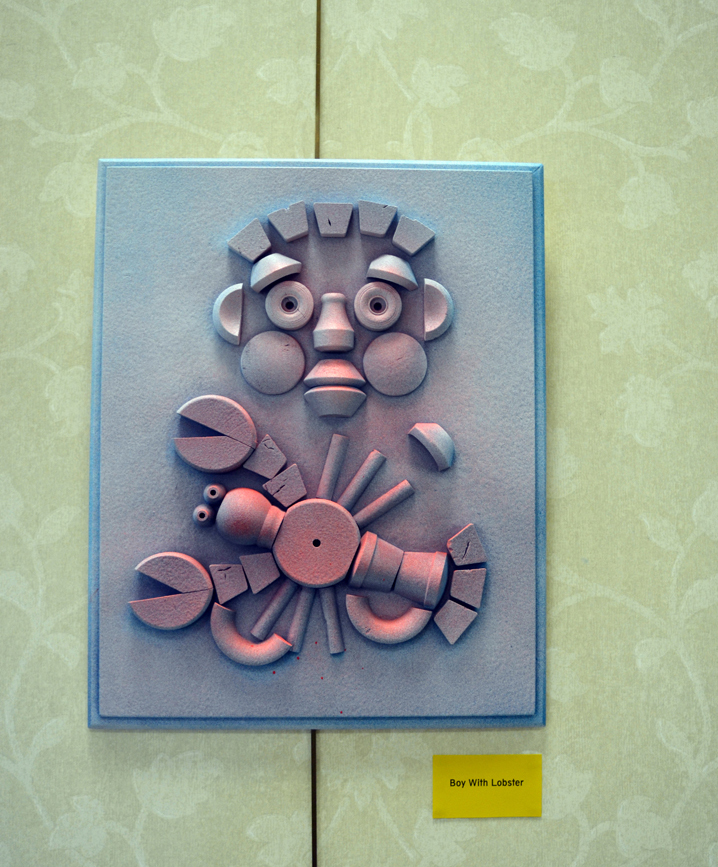 “Boy with Lobster” is one of Jack Hanson’s charming wood-assemblage pieces on display at the First National Bank in Damariscotta through the end of April. (Christine LaPado-Breglia photo)

It is always nice when businesses use their publicly accessible space to display art. Kudos to First National Bank in downtown Damariscotta for doing just that with the colorful wood-assemblage-on-board pieces created by seasoned Newcastle artist, designer, and architect Jack Hanson. Hanson’s “Maine Icons” exhibit is on display inside the bank through the end of April.

The five pieces that Hanson, who also makes carved birch ornaments, has on view in this modest show are made from recycled manufactured wood parts and finished “with a variety of acrylic paints,” as his accompanying artist statement describes it. The colors he has chosen for these delightfully quirky pieces are those that one might see on Easter eggs: pastel pink, blue, orange, green.

“Man with Fish,” in shades of blue with a hint of yellow, features a man with a seemingly blank stare holding a fish whose staring eye seems, interestingly, more engaged than the man’s. Hanson achieves these expressions using only cast-off pieces of wood such as what seem to be round wooden wheels used as eyes. “Girl with Flowers” has a similarly blank look that could also be interpreted as anticipation as she waits, clutching two flowers. Her cross necklace is a nice, humanizing touch.

Even the sun has a curious expression in Hanson’s “Sunrise at Eastport,” an anthropomorphized version of the sun in shades of light orange and pink. “The Maine Moon,” in blue-gray, works nicely as a companion piece.

One hopes that Hanson will put together a much larger show at some point featuring even more iconic features of the state of Maine. A puffin or a loon would come to an intriguing sort of life in Hanson’s artistic hands, it seems. Until then, catch this fine little show.