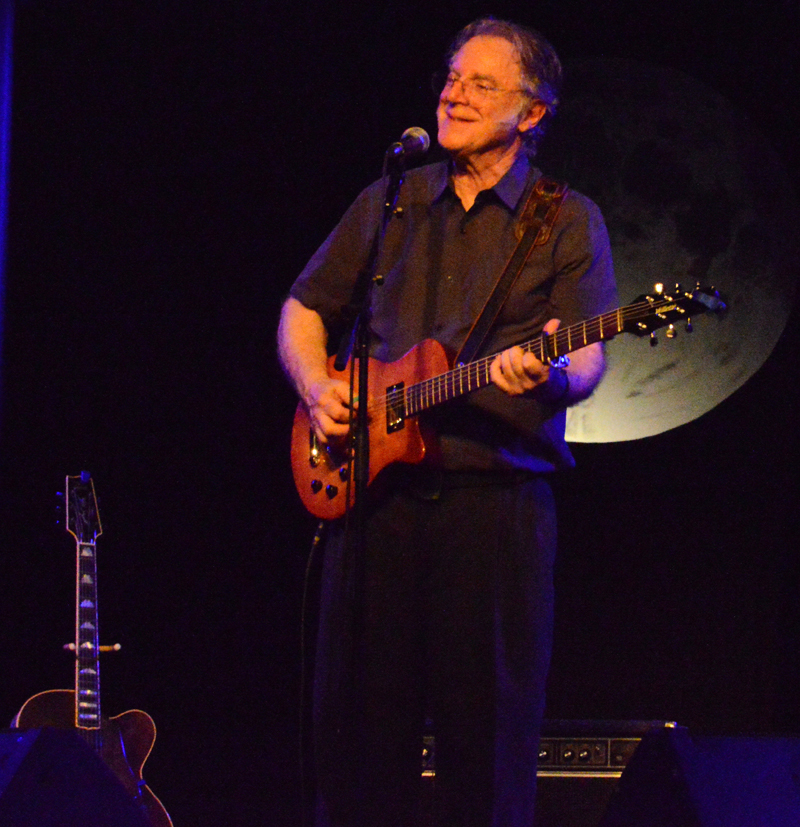 John Sebastian, with an enlarged image of the moon as his backdrop, delights the sold-out crowd out the Opera House at Boothbay Harbor with plenty of stories and song on Thursday, July 25. (Evan Houk photo)

Folk music has always been associated with storytelling and a prominent oral tradition.

Fittingly, on the evening of Thursday, July 25, in a concert at The Opera House at Boothbay Harbor, longtime singer-songwriter John Sebastian embraced his inner folkie by interspersing nearly all of his tunes with extended anecdotes from his 50-plus year career in the music industry.

From tales of gruff club owners and playing gigs next to a woman named Topless Maria, to touring with The Supremes, writing songs on Lucky Strike packs, and writing Care Bear music, Sebastian put on full display the good, the bad, and the weird in his career.

The audience, the majority of which seemed to be in the same age range as the 75-year-old Sebastian, appeared captivated by his stories in addition to the crowd-pleasing music he played throughout the evening.

Sebastian made the gig feel like an impromptu hang with the 1960s folk-rock icon, in which he told you everything you ever wanted know about his life and career, cracking jokes along the way like he just thought them up. And he played a few songs, too.

Sebastian started the night out with a song followed by a story, setting the casual, laid-back vibe right away. Sebastian fingerpicked Mississippi John Hurt’s tune “I’m Satisfied” on his electric guitar before launching into a story about seeing the legendary bluesman live. 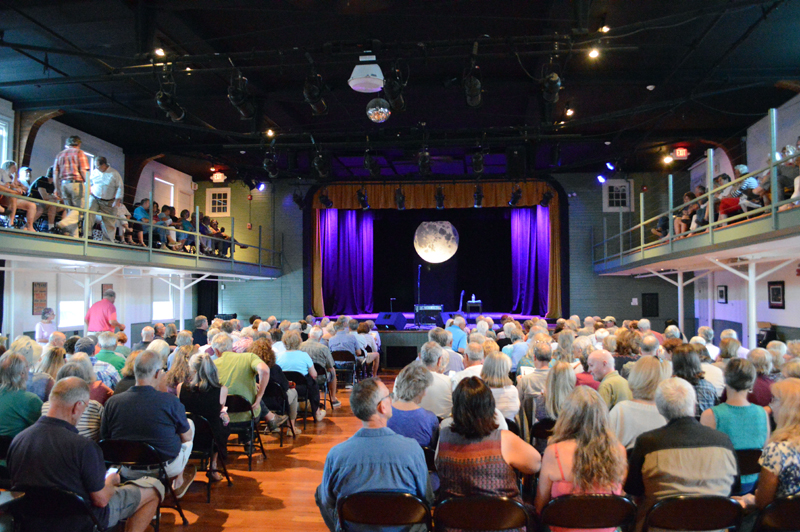 A packed house waits for John Sebastian to take the stage at 7:30 p.m. on Thursday, July 25 at the Opera House at Boothbay Harbor. Sebastian interspersed all his songs with various stories from his 50-plus years in the music industry. (Evan Houk photo)

“I thought that right up until I looked at his front row of beautiful college women,” Sebastian continued. “I remember thinking, ‘What can I learn from this man?’”

The audience erupted in laughter in response to Sebastian’s deliberate country-twang cadence and deadpan delivery. This set the tone for the entire night, as Sebastian embraced the homey atmosphere of the opera house and made it his own.

Sebastian growled his way through a down-and-dirty original blues number called “Just Don’t Stop ’Till You’re All Worn Out,” showcasing his solidly intact blues guitar skills on a solo in the middle of the song.

Sebastian is best known as a founding member of the 1960s rock band The Lovin’ Spoonful. The Lovin’ Spoonful released some pop-rock songs that are so familiar and embedded in the American psyche now that they seem like they have always existed. The band’s first seven singles in the mid-1960s all charted in the top 10, right at the apex of Beatlemania.

He also is well-known for his impromptu solo performance at the history-making Woodstock music festival in 1969, where he was plucked from the crowd when the organizers needed an acoustic performance after some rainfall. 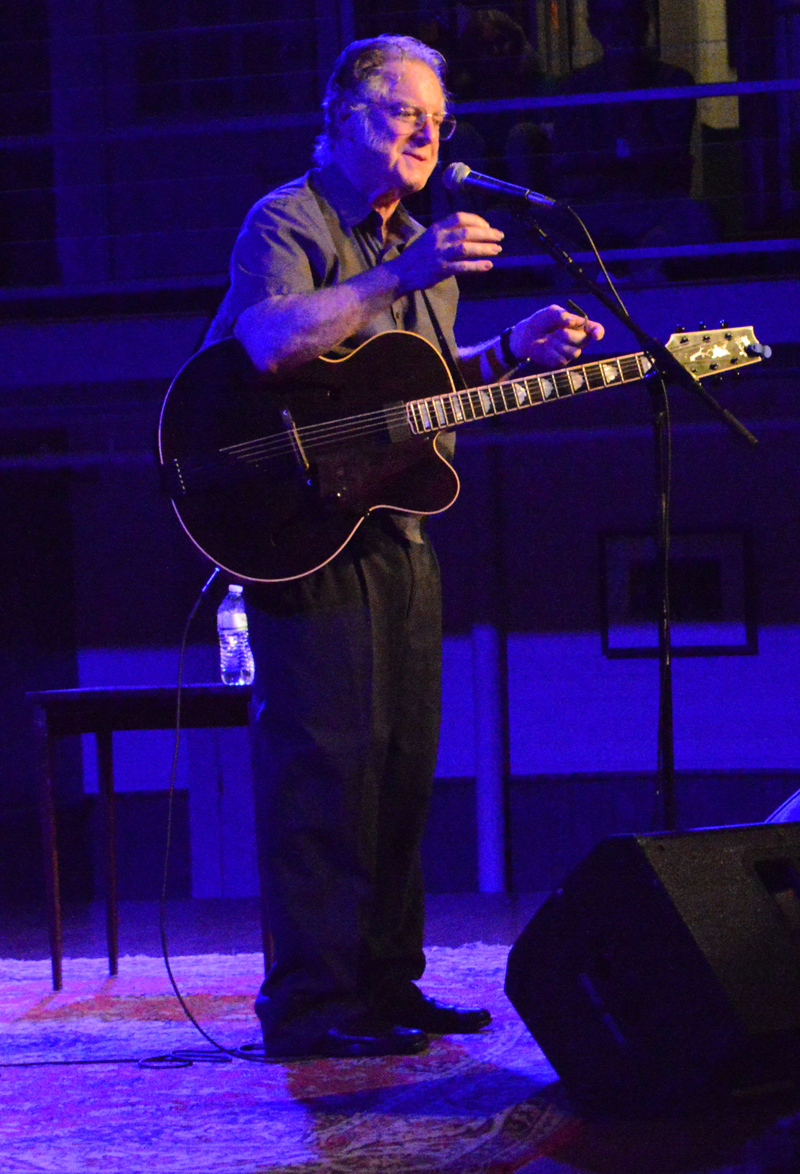 John Sebastian tells an anecdote from his 50-plus years working in the music industry at the Opera House at Boothbay Harbor on Thursday, July 25. (Evan Houk photo)

Before playing the Spoonful classic “Do You Believe in Magic?,” Sebastian talked about how the band started out as him playing folk music with a few friends at a club in New York’s Greenwich Village, the Night Owl, in the early 1960s. He explained how the club owner flat-out told them that the band was terrible, prompting them to practice more vigorously.

During his lead-in story, Sebastian, in his engaging and playful way, told a woman pointing her cellphone at him, “Go ahead, take it, let’s go. I can’t stand the suspense.”

She replied with a laugh, “I’m videoing you.”

To which Sebastian replied, “Don’t video me. Do me a favor. Enough people are stealing sh—- from me.” The audience erupted in laughter and applause.

Sebastian continued this interactive mood throughout the night, asking people to put away their phones at different points because it was distracting him, but always in a jolly and good-natured manner.

Sebastian built up to “Do You Believe in Magic?” by strumming the chords for “Heatwave” and explaining the process by which this hit song inspired him to come up with the new tune for The Lovin’ Spoonful.

Sebastian’s “Do You Believe in Magic?” was a stellar solo guitar performance that was slightly marred by the clear degradation of Sebastian’s once-dynamic vocal range. Unfortunately, throughout his career Sebastian has had his share of throat problems that have affected his singing voice, and it showed during his performance.

After a few more songs, however, his voice seemed to warm up and he settled into a gravelly blues growl that parallels Bob Dylan’s current late-career singing voice, but his range was still very limited.

By the time he got to another Spoonful classic, “You Didn’t Have to Be So Nice,” Sebastian seemed to be in a natural vocal groove and he meandered his way through the rest of the show with more story and song.

He told a story about The Lovin’ Spoonful’s early days playing alongside the dancing Topless Maria at the Cafe Bizarre in Greenwich Village.

Sebastian said the nascent group learned a valuable lesson from Topless Maria — how to play music for someone to dance to. He said she explained how the opening guitar part for “Jailhouse Rock” was composed partly by Elvis Presley’s hips bouncing off his guitar, as he demonstrated on his own electric guitar.

“See, that’s what you guys got to get with,” Sebastian recalled her saying. “You have to learn to play with the dancer.” 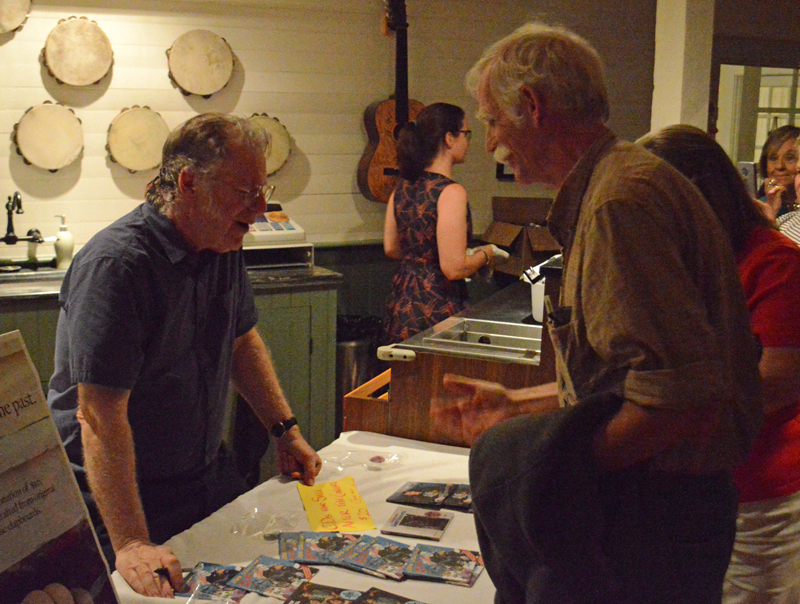 John Sebastian talks with fans and signs autographs after his performance at the Opera House at Boothbay Harbor on Thursday, July 25. (Evan Houk photo)

Sebastian embraced his entire musical career throughout the night, playing and providing background on songs from all periods of his repertoire. He made sure to include most of the Spoonful’s hits, including the theme he wrote for the 1966 movie “You’re a Big Boy Now.” One notable Spoonful hit that was left out of the set list was “Summer in the City.”

“I never knew when I wrote that tune that I’d be playing it long enough for it to become…creepy,” Sebastian said with a comical shrug of his shoulders after finishing “Younger Girl.”

The audience roared with laughter.

In addition to the well-known hits, he also included some more obscure compositions like the “Easter Has Been Very Good to Me” children’s song that he wrote for a Canadian cartoon show and the dreamy “Nobody Cares Like a Bear,” which he wrote for “The Care Bears Movie,” the soundtrack of which was released in 1985.

Throughout the show, Sebastian referred to his former bandmates wistfully, especially Zal Yanovsky, his companion guitarist in The Lovin’ Spoonful. Yanovsky, as many know, became ostracized from the music community in 1966 when he gave up the name of his cannabis dealer after he was arrested on possession charges. He did this to avoid being deported back to his native Canada. Yanovsky died in 2002 at the age of 57.

Sebastian talked at some length about Yanovsky after an audience sing-along to his classic “Welcome Back,” which gained widespread recognition as the theme song for the popular 1970s sitcom “Welcome Back, Kotter.”

Sebastian also discussed The Lovin’ Spoonful’s exciting tour of the American South with The Supremes and how he wrote the group’s hit “Did You Ever Have to Make Up Your Mind?” He described how he wrote it on a Lucky Strike cigarette pack in the back of a taxi cab and how that pack now resides in the Rock and Roll Hall of Fame in Cleveland, of which The Lovin’ Spoonful have been members since their induction in 2000.

Sebastian closed with a heartfelt rendition of “Darling Be Home Soon,” giving the audience one last hearty laugh by looking quizzically after singing the line “a quarter of my life now passed.”

“Thank you very much. Have me back!” Sebastian said at the end of the concert to cheers and applause.

He then made his way to the back of the opera house to sign autographs and chat with each person in the long line waiting to see him.