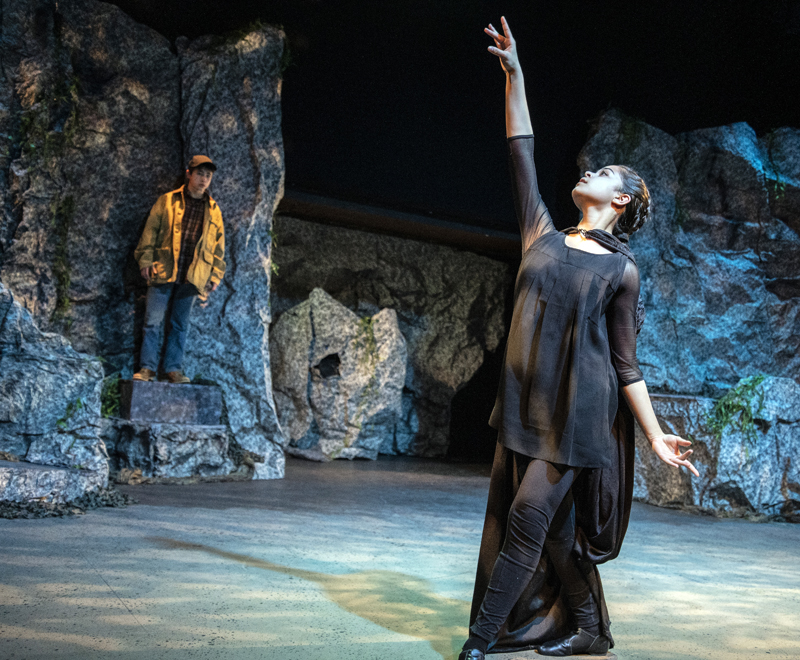 Lincoln Academy theater students merged ancient Celtic myth with fresh music and choreography in their production of “Silk Cove,” playing at the Parker B. Poe Theater in Newcastle.

A spirit of collaboration infused every aspect of the play from writing and revising to costumes and set design. The result is a deeply-felt work of drama that delves into the line where the sea stops and the sand starts, where fraught interactions between humans and fragile mythological creatures lead to love. And to tragedy.

The play opens in the British Isles with an origin tale that lays the groundwork for an underlying mythology. Selkies, also known as seal people, were often portrayed in the ancient tales of Ireland and Scotland as creatures that could take on human form when they ventured from the sea.

But, as with all such powers, there is a catch: By removing their sleek, dark skins they became vulnerable. If a human steals a selkie’s skin, the selkie becomes bound to that person and can no longer return to its ocean home.

An act of violence in the distant past sets the story in motion and echoes down through time and across continents. Centuries later, on the coast of Maine, fisherman Duncan McTavish and Margaret, his wife of 30 years, find themselves facing decisions they’d rather not make when a mysterious girl washes up on the rocks and is found by their only son.

The love between Duncan and Margaret, born of a lifetime facing obstacles together, plumbs the depths of pain and heartbreak. Marcus Russano, as Duncan, wrenches raw emotion from the audience with subtly expressive acting. Alicia Flis as Margaret is a bolt of fear and desperation as she seeks a solution to save her family from a fate she knows all too well.

Young lovers Sepp Zammuto as Iann and Sophia Scott as Seda are as yet unscarred by the harsh past: They are naive and tender in their interactions, oblivious to the ramifications of their relationship.

Joseph Levesque and Aowyn Burbank as Seal Father and Seal Mother share only one scene together but that scene represents the point at which fate turns.

“Every move that everyone makes is because of (Seal Father’s) presence even though we only see him once,” Burbank said.

Mitchell Straus as tormented walker Angus, and Lila Drewes as Iann’s best friend Fiona prove  that opposites attract as they add angst and a breath of fresh air respectively.

Rebecca Tomasello as Dierdre, a scientist sent by the state to investigate illegal seal poaching, winds up being a voice of both reason and compassion. And a catalyst for the story’s conclusion.

Harrison Pierpan who narrates the play as Eamon guides the audience skillfully from beginning to end. Pierpan said he was initially frustrated by the role. As a narrator “you can’t play off a scene partner. You have to take the scene as a whole and build energy off that.”

The narrator is also tasked with tying everything together. “That was scary but I think it’s been a good challenge for me,” he said.

The play, originally written by LA Theater Director Griff Braley in 2013 for the Maine Principals’ Association One-Act Drama Festival, presented a unique opportunity for Braley’s students to extend their theatrical education beyond acting and into the nuts and bolts and nuances of production.

In December members of the cast and crew divided into small groups, each group tackling a different aspect of the show.

Senior theater students Marcus Rosano and Logan Heath led a team to review and revise the script, a process that continued into dress rehearsals and up to opening night. As they expanded on the original they had to ensure the thread of the story tracked, that the mood of the play remained consistent. They researched the history and mythology on which the play was based, and implemented suggestions made by the actors regarding individual character’s motivations.

Multiple revisions challenged the actors in ways that previous productions had not.

When the selkies are on stage, they are mesmerizing, their movements fluid yet intentional. They are a bit like an underwater Greek chorus that helps shift the audience’s attention from dilemma to dilemma as the action unfolds.

Pierpan, Scott, Tomasello, and Burbank worked closely with Braley to compose original music and lyrics for the production.

Pierpan wrote the opening song, “Endless Knots,” to introduce the feel and tone of the play which he described as being about how time can both heal and hurt. He took inspiration from the film score for “The Lord of the Rings” to match his vocal with the ominous drone of a single repeated piano note.

Scott wrote much of the music for the show, including the transitional song “Oh, Wind,” and Seda’s solo “Lost Soul.”

Scott plays classical guitar and melded that sound with elements of pop and folk music in her compositions. She said she channeled “underrated songwriters that don’t get a lot of hype,” pulling ideas from the acoustic performances of musical influencers.

Tomasello jumped at the chance to write music for the show. She played electric violin by ear during the play’s prologue, picking out notes that she felt would build on the emotion of the characters and audience.

She also wrote “When the Ocean Calls,” the first original song she ever shared. Her lyrics describe how “all these people are being called back but they don’t want to go – that’s what causes everything else to happen, the heartache and the hardships.”

Burbank first picked up a guitar and started writing songs during COVID.  “I guess quarantine sparked that musician in me that wanted to write and produce and create,” she said.

She penned the song “Lost in Reality,” which she shaped around the bond between Seal Mother and her children. 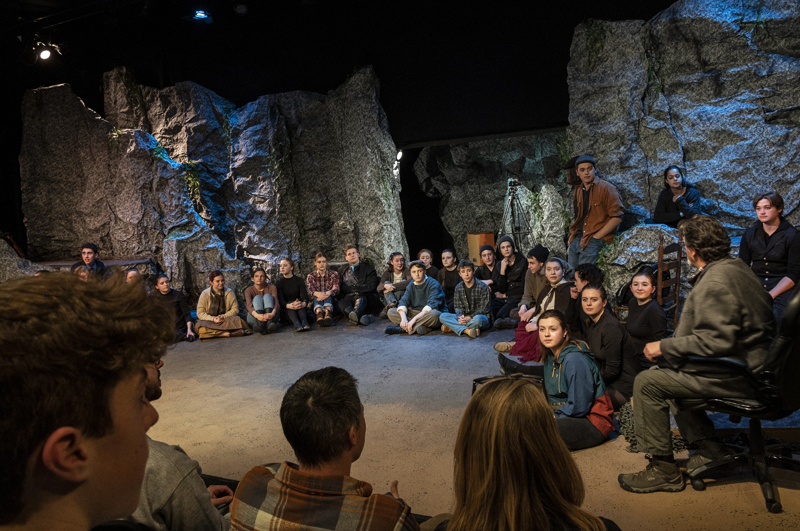 Audience and cast participate in a talk through on opening night of the Lincoln Academy student production of “Silk Cove” on March 25. Direct feedback from the audience provides an additional educational opportunity for the cast and tech crew. (Bisi Cameron Yee photo)

“I looked at (Seal Mother’s) transition, how hurt she is. I saw her as lost,” Burbank said. “I didn’t write it until I had rehearsed her lines. I had to feel how she felt before I could write how she felt.”

Callista Stapp performed the haunting seal calls that add another dramatic musical element to the play. The first is her own spin on a “keen song,” or Scottish lament.

“I was so excited,” she said. “It was a piece I know Griff really wanted.”

Other pieces were wordless vocalizations based on the Celtic musical traditions that she loves, pieces that “add a cultural depth.”

The opening night performance of “Silk Cove” included a talk-back between the cast and the audience after the play ended. There will be another such opportunity after the April 1 performance.

One question posed was whether an experience like “Silk Cove” which involved so many aspects of creation and production was more beneficial to students than putting on a more established musical.

Pierpan responded in the affirmative. “You develop a lot of passion for it… you get a connection… you feel a lot more drive to get it right.” Straus said “it really furthers your acting in a play like this where you get to make decisions for yourself.”

Flis pointed to “lots of work, lots of hours” as reasons for the “complete emotional investment” on the part of the cast.

It’s clear that these students did not just act, revise, compose, build, costume, or dance this production of “Silk Cove.”

Tickets for “Silk Cove” are $5 and are available through Heartwood Theater Co. for performances on March 31, and April 1 and 2. The April 1 performance will include a talkback with student actors, writers, musicians, and choreographers.

For more information and to reserve tickets, email info@heartwoodtheater.org.