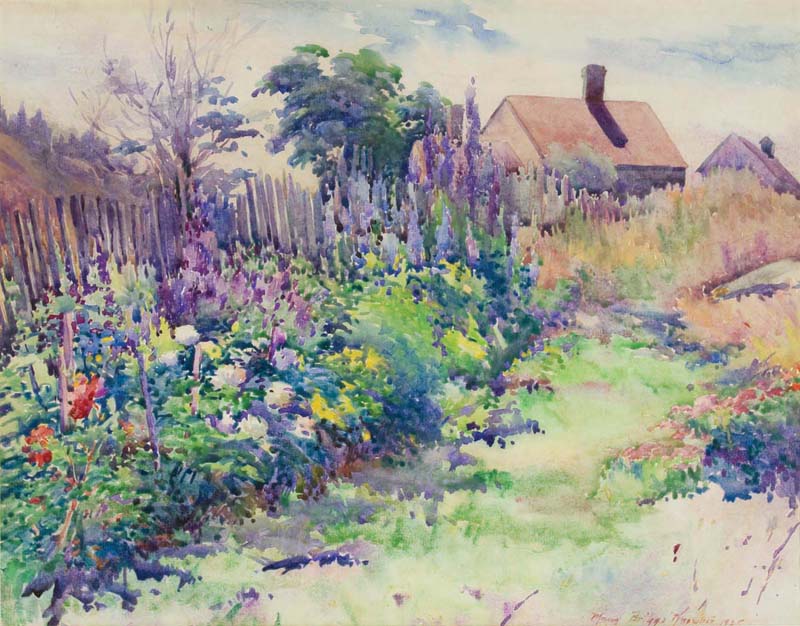 “Wharf Hill, Monhegan,” a watercolor painted in 1927 by the late Maud Briggs Knowlton, could just as easily have been painted in 2019, as it is so perfectly representative of Monhegan Island’s timeless beauty.

The painting, featuring a quintessential Monhegan scene of a yellow-and-white house – the John Sterling House, to be exact – with many colorful flowers in its front yard and a horizon containing a peek at the surrounding Atlantic Ocean, is one of many Knowlton pieces in the current exhibit at the Monhegan Museum of Art & History. 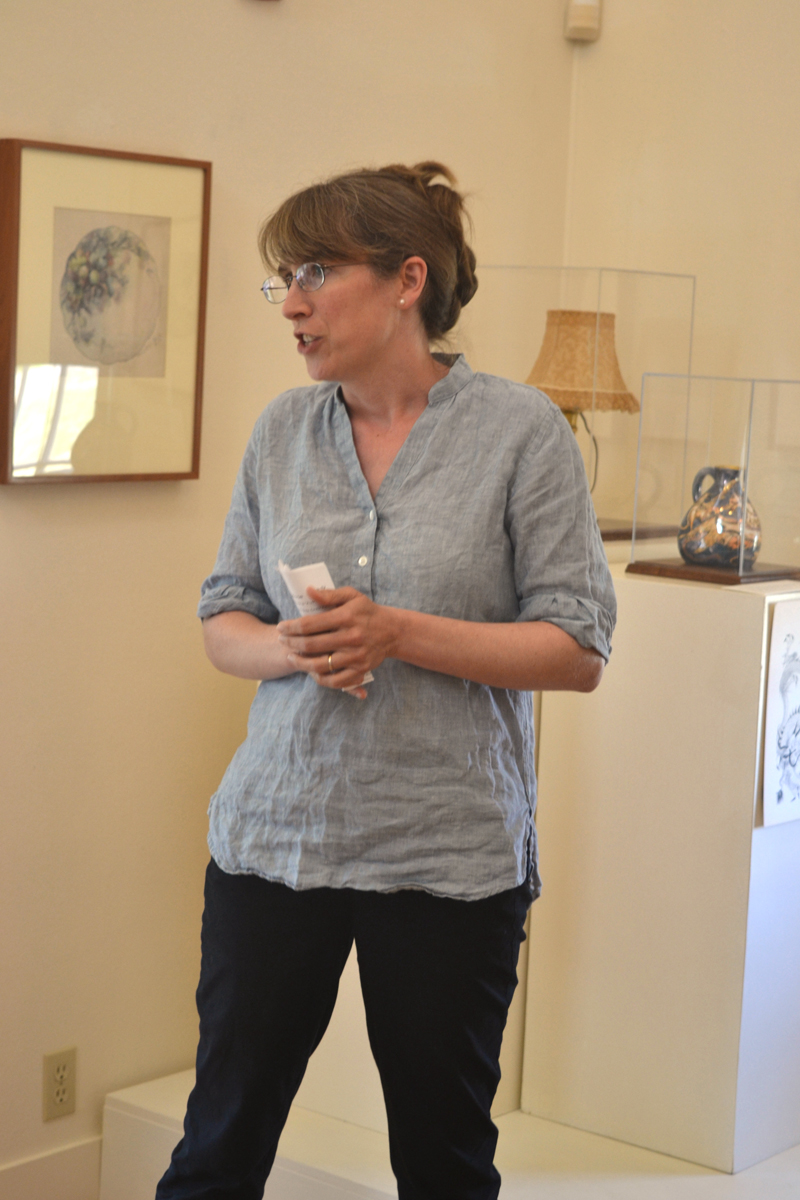 Emily Grey, the curator of exhibitions at the Monhegan Museum of Art & History, gives a gallery talk about the museum’s “A Life Made in Art: Maud Briggs Knowlton” exhibit on the afternoon of Aug. 2. (Christine LaPado-Breglia photo)

The exhibit, which runs through Sept. 30, is titled “A Life Made in Art: Maud Briggs Knowlton” and features numerous paintings, mostly watercolors, from the course of Knowlton’s unique career as one of the first women to paint on Monhegan in the late 19th century. Knowlton, who became the first director of the Currier Gallery of Art, now the Currier Museum of Art, in Manchester, N.H., in 1929, passed away in 1956.

The Monhegan Museum of Art & History show also offers some of Knowlton’s elaborately painted ceramic pieces, such as a 1904 table lamp whose base is painted in gold with ornate sky-blue poppies and a “hair receiver,” a receptacle in which to save hair from hair brushes for various purposes, from the period 1900-1908. Knowlton’s early career as an artist included her being a ceramicist as well as a painter.

The comprehensive show includes an area featuring black-and-white photographs by Edward T. Knowlton, the husband of Maud Briggs Knowlton. Edward Knowlton’s rather gritty work, often of rustic buildings on the island around the turn of the 19th century, stands in interesting contrast to his wife’s softer, colorful work. “Sail Loft or Fish Drying House, Brackett and Wincapaw Fish Houses,” a black-and-white gelatin silver print from 1897 of buildings no longer standing, is typical of this work, offering both historical value and a strangely serene composition.

Maud Briggs Knowlton’s lovely large vertical watercolor “Harbor Garden, Monhegan,” from 1912, is typical of her most touching and quintessentially Monheganesque work. Looking off into the distance to Monhegan’s little harbor, populated with skiffs, and to closely neighboring Manana Island, the piece features a profusion of colorful flowers that Knowlton was so good at representing in its central portion, in front of the house she has pictured.

The accompanying card observes: “Like many of her earlier garden scenes, Maud used the geometry of the architecture as a foil against the grouping of riotous poppies, hollyhocks, and daisies depicted in short, staccato brush strokes.”

Other paintings reveling in Monhegan’s flowers include the watercolors “Monhegan Shore Flowers,” from 1912, and “Triscott’s House,” from 1919. The information card next to the striking “Triscott’s House” points out that Knowlton “seem(ed) to delight in the textures and colors of the distinctive red house of her next-door neighbor, British-born watercolorist S.P. Rolt Triscott, the first artist to live year-round on Monhegan.”

Not all of Knowlton’s work focuses on flowers. Some, like “Gull Rock, Monhegan,” a small oil painting from 1910 framed with plain plywood matting, focus on Monhegan’s rocky coastline. Another oil, “Spruce Grove, Monhegan,” from 1940, takes skilled delight in the sturdy green windbeaten trees and even sturdier rocky ledges of the island.

Described in the exhibit as “one of Knowlton’s most atmospheric oils,” “Foggy Day, Monhegan,” dated 1925, is unique among Knowlton’s paintings in its approach to depicting buildings on the horizon as roughly delineated gray forms, suggesting the fog obscuring what might otherwise be a clearer view. 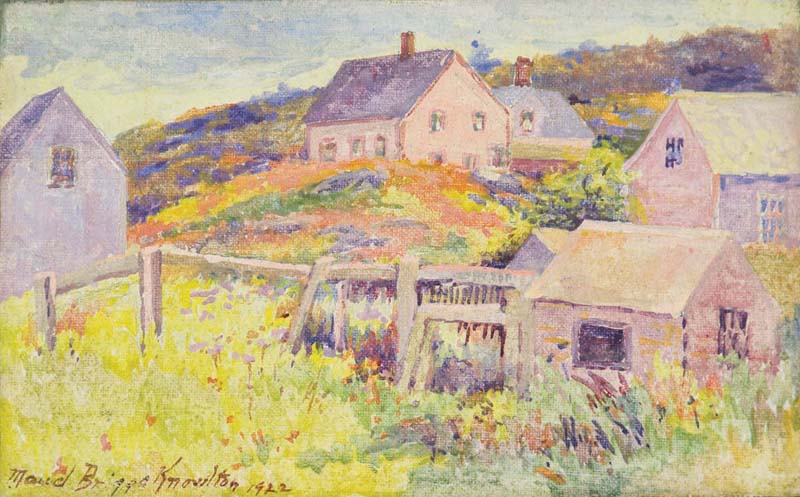 In “Wharf Hill, Monhegan,” an inviting dirt trail, exactly like those one walks on the island to this day, runs diagonally from the lower right-hand corner to the middle of the piece’s left side. The accompanying card states: “Though carefully composed, this seemingly casual scene represents a walk that rusticators and islanders have made for decades.”

It is indeed the timelessness of Knowlton’s work that gives it such power to this day.